Advertisements seeking the return of slaves and servants whohad run away together filled colonial newspapers.

When a slave named Charles escaped in 1740, the Pennsylvania Gazette reported that two white servants, a 'Scotch man' and an Englishman, escaped with him.

During Bacon's Rebellion in 1676, slaves and servants took up armsagainst Native Americans and the colonial government in Virginia.

In 1712 New York officials executed Native Americans and African American slaves for plotting arevolt, and in 1741 four whites were executed and seven banished from colonial New York for participating with slaves in a conspiracy.

People in similarcircumstances—poor and unfree whites, Native Americans, and blacks-formed alliances throughout the colonial era. V AMERICAN REVOLUTION A Black Participation in the War After the British defeated the French in the French and Indian War (1754-1763), the British began to change their relationship with their American colonies.

Theystarted to increase taxes, demanded that the colonists help pay for British soldiers stationed in the colonies, and controlled the colonial trade opportunities morecarefully.

Most colonists were outraged, particularly about the new taxes.

They felt that Great Britain did not have the right to tax them, since it did not allow themrepresentatives in Parliament. Colonists, both black and white, worked together to fight what they saw as British injustices.

Interracial mobs rioted against the Stamp Act of 1765 and other despisedregulations imposed on the colonies throughout the 1760s.

In 1770 Crispus Attucks, a fugitive slave of mixedAfrican and Native American descent, led an interracial crowd of sailors and laborers in attacking the British guard at Boston's customs office.

They threw snowballs,chunks of ice, and stones; in response, the soldiers fired into the crowd, wounding six and killing Attucks and four others.

For rebellious Americans, the BostonMassacre, as this event was named, symbolized Britain's armed determination to deprive them of their rights. When the American Revolution began in 1775, all but 25,000 of the 500,000 African Americans in British North America were enslaved.

Many were inspired by Americanproclamations of freedom, and both slaves and free blacks stood against the British.

The black minutemen at the Battle of Lexington in 1775 were Pompy of Braintree,Prince of Brookline, Cato Wood of Arlington, and Peter Salem, the slave of the Belknaps of Framingham, freed in order that he might serve in the Massachusetts militia.Prince Estabrook, a slave in Lexington, was listed among those wounded in this first battle of the war.

It was the British who made the first move to enlist blacks.

In November 1775 Lord Dunmore, theBritish colonial governor of Virginia, issued a proclamation that all slaves belonging to rebels would be received into the British forces and freed for their services.

Tensof thousands of slaves escaped from Southern plantations, and over a thousand fought for the British.

Tye, 'a Negro who [bore] the title of colonel' led one interracialguerrilla band in New Jersey.

In the South, such bands, called banditti, burned and looted plantations, stole horses, and liberated slaves, some of whom became Britishsoldiers. The demands of war eventually changed Washington’s mind, and he began to recruit black soldiers.

Before the war was over, more than 5000 African Americans fromevery state except Georgia and South Carolina served in the Revolutionary army.

Slaves, many serving in their owner's place, were promised freedom in return for theirservice.

There were several black regiments like the Rhode Island Regiment and Massachusetts' 'Bucks of America,' but most African Americans served in integratedunits, the last integrated American army units until the Korean War in the 1950s. Thus, African Americans in search of freedom from slavery served on both sides during the Revolution.

As a result of the Revolution, the population of free blacks in theUnited States increased-from about 25,000 in 1776 to nearly 60,000 when the first federal census was conducted in 1790. B The Ideals of the Revolution Slavery was important to American patriots.

It was the opposite of liberty and served as a benchmark against which they measured their own freedom.

They continuallywarned that they would not be denied their rights, saying they must not be the 'slaves' of England.

The ideals of the Revolution emphasized the incompatibility ofslavery in a free land, and slaves petitioned for their freedom using the words of the Declaration of Independence. African Americans hoped that men who wrote such lofty words as “all men are created equal” would realize the immorality of continuing to enslave their fellowcountrymen.

'We expect great things,' one group wrote, 'from men who have made such a noble stand against the designs of their fellow men to enslave them.' However, the American Revolution and the American colonies’ fight against British oppression did not bring slavery to an end.

Slavery remainedimportant to the economy of the new nation, and after the Revolution, it became more concentrated in the South. VI THE CONCENTRATION OF SLAVERY IN THE SOUTH In the North the rhetoric of the Revolution proved a powerful argument against slavery.

Starting with Vermont in 1777, one Northern state after another eitherabolished slavery outright or passed gradual emancipation laws that freed slave children as they reached adulthood.

Although abolition faced stiff opposition in areas ofNew York, Rhode Island, and New Jersey, where slavery was most economically significant, by the mid-1820s virtually all the slaves in the United States were in theSouthern states.

These states were becoming more dependent on slave labor as cotton became an important plantation crop. In 1793 the invention of the cotton gin, a simple device that revolutionized the processing of raw cotton, dramatically increased the profitability of cotton cultivation.More slave labor was dedicated to cotton production; slave prices increased, and the value of cotton rose sharply.

In addition, slavery spread southward and westwardinto the vast area acquired from France through the Louisiana Purchase in 1803.

By 1815 cotton was America's most valuable export, and the economic and politicalpower of cotton-growing states, often called the 'Cotton Kingdom,' grew correspondingly. The need for slave labor, and thus the price of slaves, was much higher in states in the lower South, such as Alabama, Mississippi, and Louisiana, than in the states ofthe upper South, including Virginia and Maryland.

The result was a thriving domestic slave trade that devastated many slave households.

Teenage boys and young adultmen were especially desirable laborers for the new areas, and slave families in the upper South lost sons, brothers, and young fathers to the cotton plantations of thelower South.

At the time of the Revolution, most slaves were held along the southeastern seaboard, but by 1860 the greatest concentrations of slaves were in the lowerSouth. The lives of slaves were greatly influenced by where they lived and worked.

Both in cities and on plantations, skilled slaves did the carpentry, built and sometimesdesigned the buildings, crafted ornate furnishings, prepared elaborate meals, supplied music for planters' formal balls and parties, and provided services ranging fromveterinary care to folk medicine for both whites and blacks.

Plantations employed small numbers of slaves as household servants and some as skilled workers. 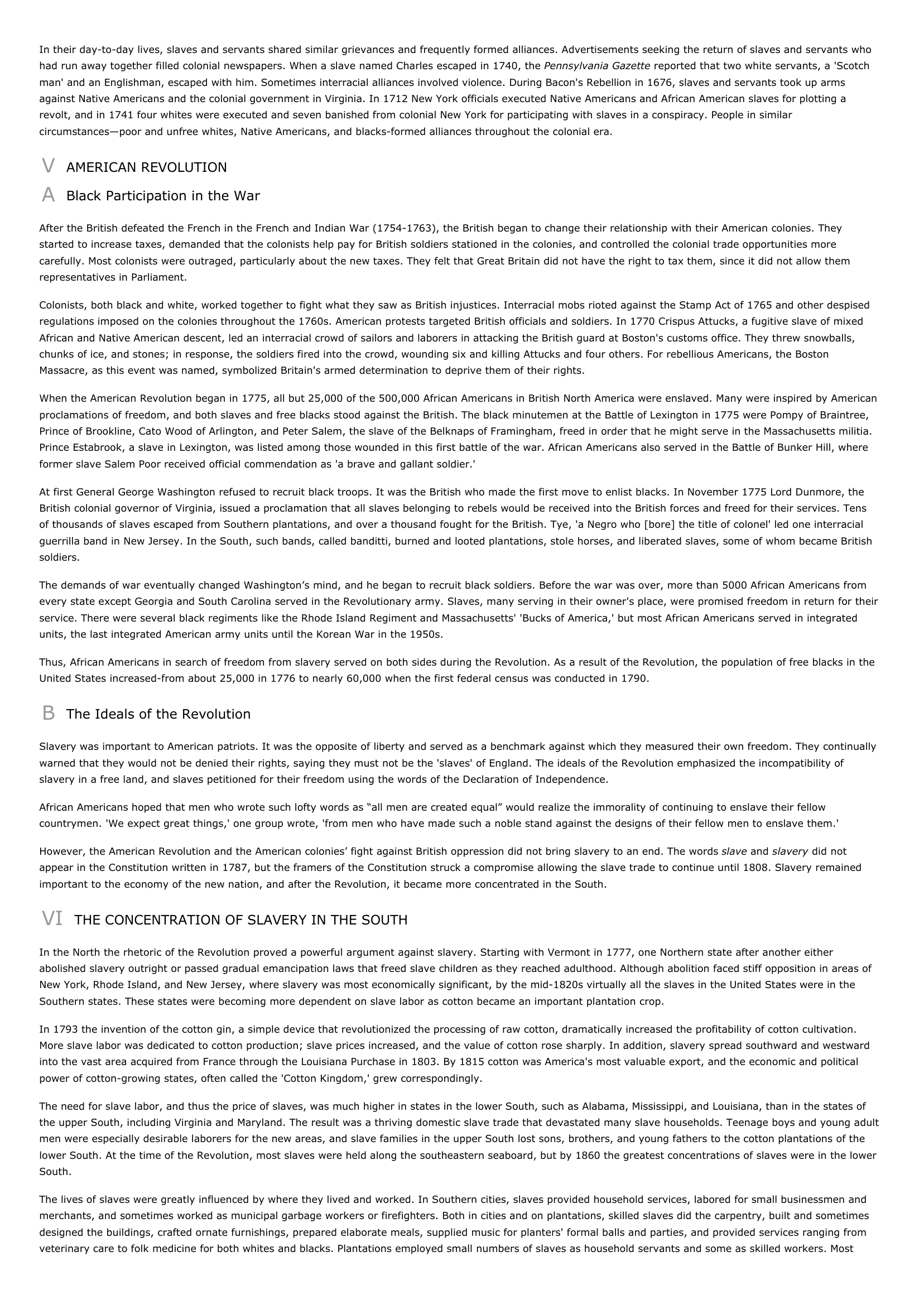