« Vertebrates are customarily divided into cold-blooded and warm-blooded animals, but these labels are not very precise.

An ectoderm is an animal whose temperature is dictated by its surroundings, while an endoderm is one that keeps its body at a constant warm temperature by generating internal heat. Reptiles, amphibians, and fish are ectoderms.

Although they do not maintain a constant warm temperature, some of these animals do manage to raise their bodytemperature far above that of their surroundings.

They do this by behavioral means, such as basking in direct sunshine when the surrounding air is cool.

These animals generate heat through their metabolic processes, and they retain it by having insulating layers of fat, fur, or feathers.

Becausetheir bodies are always warm, they can remain active in some of the coldest conditions on earth. III ANIMAL HABITATS Few parts of Earth’s surface are entirely devoid of animal life.

However, in all habitats that lie between these extremes, animal life abounds. A Aquatic Habitats Animal life first arose in water.

Millions of years later, marine and freshwater habitats continue to support a large proportion of the animal life on earth.

The richest of all these habitats are coral reefs, underwater ridges thatform in clear water where the minimum temperature is 20° C (68° F) or above.

Coral reefs are composed of an accumulation of the remains of coral—invertebrates withstony skeletons—calcareous red algae, and mollusks.

One of the reasons for the great diversity of animal life in reefs is that living coral creates a complex three-dimensional landscape, with many different microhabitats.

The smallest crevices provide hiding places for scavengers such as crabs and shrimps, while larger onesconceal predators such as octopuses and moray eels.

Over half the world’s fish species live in coral reefs, many hiding away by day and emerging after dark to feed. On reefs and rocky shores, many animals are sessile, meaning that they spend their entire adult lives fixed in one place.

These species, which include sponges,barnacles, and mollusks, as well as reef-building corals themselves, typically spend the early part of their lives as drifting larvae, before settling on a solid surface andchanging shape.

Sessile animals are common in aquatic habitats because it is relatively easy for them to collect food, which typically is pushed in the animal’s directionby water currents.

By contrast, very few sessile animals have evolved on land. In open water, depth has a marked influence on animal lifestyles.

The surface layers of the open sea teem with small and submicroscopic animals, which feed either onalgae and other plantlike organisms or on each other.

These animals form part of the plankton, a complex community of living things that drifts passively with thecurrents.

Many planktonic animals can adjust the depth at which they float, but larger animals such as fish, squid, and marine mammals, are strong enough tocommute between the surface and the depths far below. Even in the clearest water, light quickly fades with increasing depth.

Deeper than about 150 m (500 ft), not enough light penetrates for photosynthesis to occur, soalgae are unable to survive.

With increasing depth, water pressure rises and temperature falls, ultimately coming close to the freezing point on the ocean floor.

Despitethese extreme conditions, animal life is found in the ocean’s greatest depths, fueled by the constant rain of organic debris that drifts down from far above.

In a habitatwhere prey is widely scattered, many deep-sea fish can swallow animals larger than themselves, an adaptation that allows them to go weeks or months between meals. B Land Habitats On land, animal habitats are strongly influenced by climate, the combination of precipitation and temperature conditions experienced in a region.

At or near the equator,year-round moisture and warmth generates a constant supply of food.

Further north or south, seasonal changes become much more pronounced, shaping the type ofanimals that live in different habitats and their strategies for survival ( see Animal Distribution). Tropical and subtropical forests are home to by far the largest number of animal species on land.

These animals include the majority of the world’s insects, most of itsprimates, and a large proportion of its birds.

Tropical forests have existed longer than any other forests on earth and their plants and animals have evolved anelaborate web of interrelationships. Much of the animal life of tropical forests is still poorly known, and new species are constantly being discovered.

The majority of these newly identified animals areinvertebrates, but larger animals have also come to light during the 20th century.

Major discoveries have included three large but secretive plant-eating mammals: theokapi, discovered in Central Africa in 1900; the kouprey, discovered in the forests of Cambodia in 1937; and the sao la, which was identified in forests bordering Laosand Vietnam in 1993. Unlike tropical forests, temperate forests provide animals with an abundance of food during spring and summer, but a dearth during the winter.

In this habitat, animalshave evolved several different strategies for avoiding starvation during the winter months.

Food hoarders, such as squirrels and jay birds, bury surplus food during thefall, and dig it up again when other food supplies run out.

Other forest animals, such as the common dormouse, avoid food shortages by hibernation, a period ofinactivity when body temperature is lowered.

A third group of animals—composed chiefly of birds, but also including some bats and insects–migrates to warmer regionsbefore the winter begins and returns again in spring.

In boreal forests, which are found in the far north, the seasonal swings are more extreme.

Here only a few speciesstay and remain active during the winter months. For land animals, the most testing habitats are ones that experience intense drought or extreme cold.

Desert animals cope with heat and water shortage by behavioraladaptations, such as remaining below ground by day, and also by physiological adaptations.

They do this by losing very little moisture from their bodies and using all the “metabolic water” that is formed when food is brokendown to release energy. In tundra and on polar ice, winter air temperatures can fall to below -40° C (-40° F), which is far colder than the temperature of the surrounding seas.

The smallestinhabitants of tundra, which include vast numbers of mosquitoes and other biting flies, spend winter in a state of suspended animation and are kept alive by chemicalantifreeze within their tissues.

The few animals that do remain active on land or ice during winter, such as seals and male emperor penguins, rely on a thick layer ofinsulating fat to prevent their body heat leaking away.

Without this fat, they would die within a matter of minutes. IV FEEDING Animals all feed on organic matter, but their diets and way of obtaining food vary enormously.

Some animals are omnivores, meaning that they are capable of survivingon a very wide range of foods.

Many other animals, from giant pandas to fleas, have extremely precise requirements and cannot deviate from their highly specialized. » 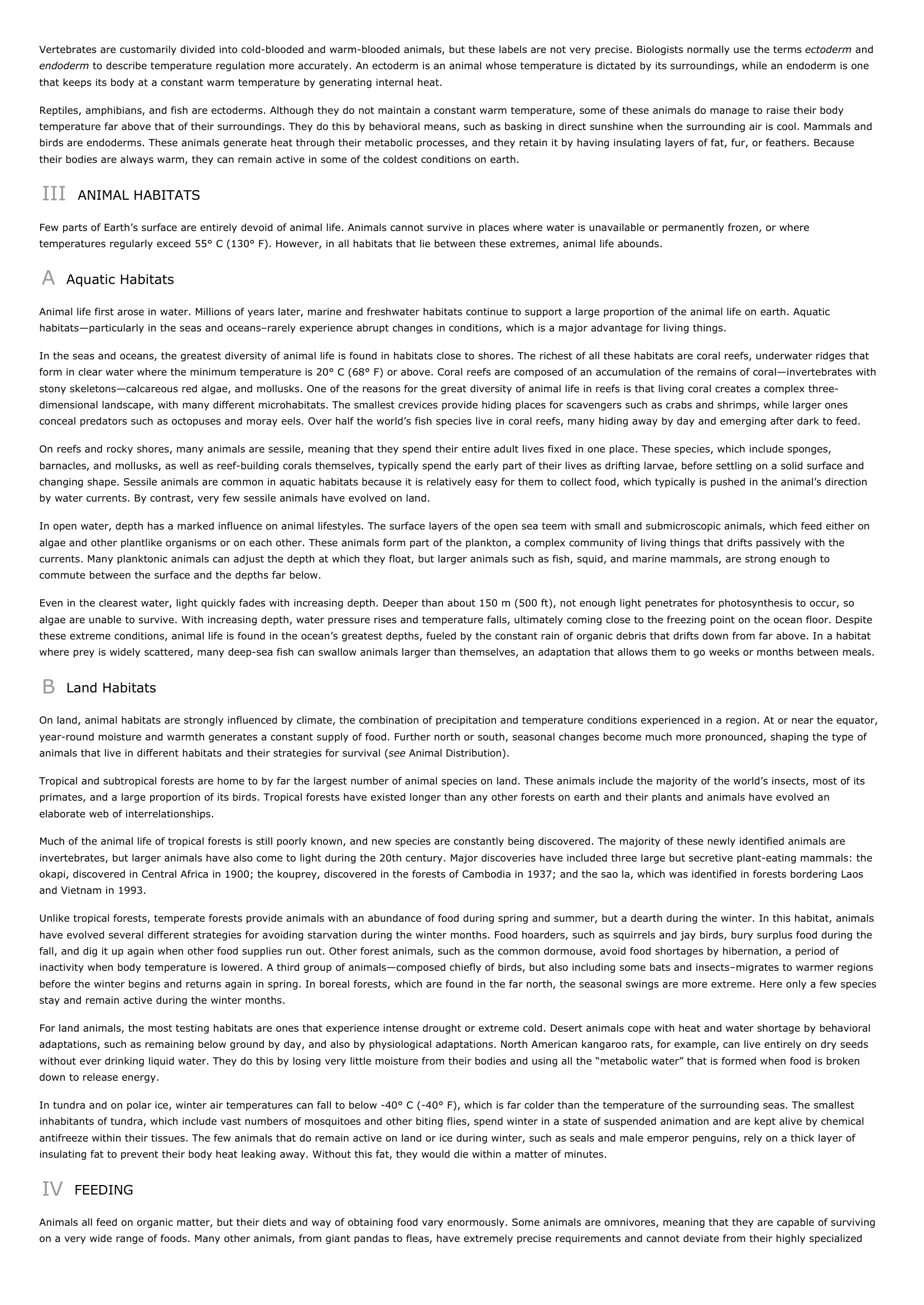