« The monetary unit of Antigua and Barbuda is the East Caribbean (EC) dollar of 100 cents (2.70 East Caribbean dollars equal U.S.$1, a fixed rate since 1976). VI ENVIRONMENTAL CONCERNS The growth of the tourist industry has created some environmental problems, including uncontrolled disposal of sewage from hotels on the beach.

Water management is another major area of concern because of limited natural freshwater resources.

Coral reefs thatsurround the islands have suffered disturbance to their ecosystem as a result of fishing, which has nearly doubled since 1980. VII GOVERNMENT Antigua and Barbuda is a constitutional monarchy.

The British monarch, represented by a governor-general, is the head of state. A Executive and Legislature The prime minister is the head of government.

There are two legislative houses, the House of Representatives and the Senate; both have 17 seats.

One of the seats inthe House of Representatives is allocated to Barbuda and all members are elected for up to five-year terms by universal adult suffrage.

The Barbuda People’s Movement(BPM) is one of the larger minority parties. B Health and Welfare The state provides free medical care, and the social security system supplies benefits for senior citizens and sick or disabled people.

Life expectancy is 70.3 years formales and 75.2 years for females (2008). VIII HISTORY The first inhabitants of the islands were the Ciboney, who were related to the Arawak.

Archaeological evidence points to settlements dating from around 2400 BC. Between AD 35 and 1100 the Arawak lived on Antigua, but the Carib were in residence at the time of the arrival of Christopher Columbus in 1493, during his second voyage.

He named the island Santa María de la Antigua after a church in Seville, Spain, but did not settle it.

Subsequent attempts by both the French and Spanish toestablish colonies were fought off by the Carib. A Colonization It was not until 1632 that Antigua was successfully colonized by the British.

Apart from a brief interlude of French rule in 1666, the island and its dependencies, Barbudaand Redonda, remained under British control until independence in 1981. The first sugar plantation was established in 1674 by Sir Christopher Codrington.

Barbuda, colonized by the British in 1678, was leased by the Codrington family untilthe late 19th century, when it reverted back to the British crown.

It was used by them to raise provisions for the slaves introduced to clear the forests of Antigua andplant sugarcane. Antigua was a valuable colony, not only for the sugar grown there, but also for its deep natural harbors, notably at Saint John’s and at Falmouth on the southeasternside of the island.

Ships were refitted there safe from attack, and during the 17th and 18th centuries fortifications were built, many of which still survive, notably ShirleyHeights and Nelson’s Dockyard in Saint John’s. Horatio Nelson, a famous British naval commander, served for nearly three years in Antigua as a young man, and visited the island again in 1805 during his pursuit of aFrench fleet, which ended with the Battle of Trafalgar.

The future king William IV was also on Antigua, as a young midshipman, in the 1780s. Slavery was abolished on the islands in 1834, but the resulting freedom was limited and brought little respite from the harsh working conditions on the sugar estates.There was no land available for the freed slaves and the plantation owners continued to treat them as they had before.

In 1946 the ALP wonthe first of many elections.

Bird, his family, and the ALP then dominated Antiguan politics for decades. In 1967 Antigua attained associated status with the United Kingdom, an arrangement that gave it full internal self-government.

It achieved independence in November1981 as a single territory with Barbuda, despite a campaign for separate independence by the Barbudans.

As a concession to enable independence to go ahead,Barbuda was granted considerable internal autonomy.

However, the pressures for separation have not gone away; the Barbudan People’s Movement, which advocatesself-government, has since dominated Barbuda’s politics.

Antigua and Barbuda is a member of the Commonwealth of Nations. C After Independence Bird was the first prime minister after independence and remained in office until his retirement in 1993.

He was succeeded by one of his sons, Lester Bird, following thegeneral election of 1994.

After his election, Lester Bird tried to portray a professional image as prime minister and paid particular attention to the economy. However, scandals and allegations of corruption beset Lester Bird’s family and the government.

In 1990 an international arms-smuggling ring was exposed and ajudicial inquiry investigated the involvement of Lester’s brother, Vere Bird, Jr.

In 1996 another brother, Ivor Bird, was arrested and fined for handling cocaine.

At thesame time, Lester Bird’s finance minister was forced to resign amid controversy over his alleged failure to pay customs duty on an imported vintage Rolls-Royce car. The offshore banking sector has also come under pressure to reform, following allegations of money laundering.

In February 1997 the government closed down five. » 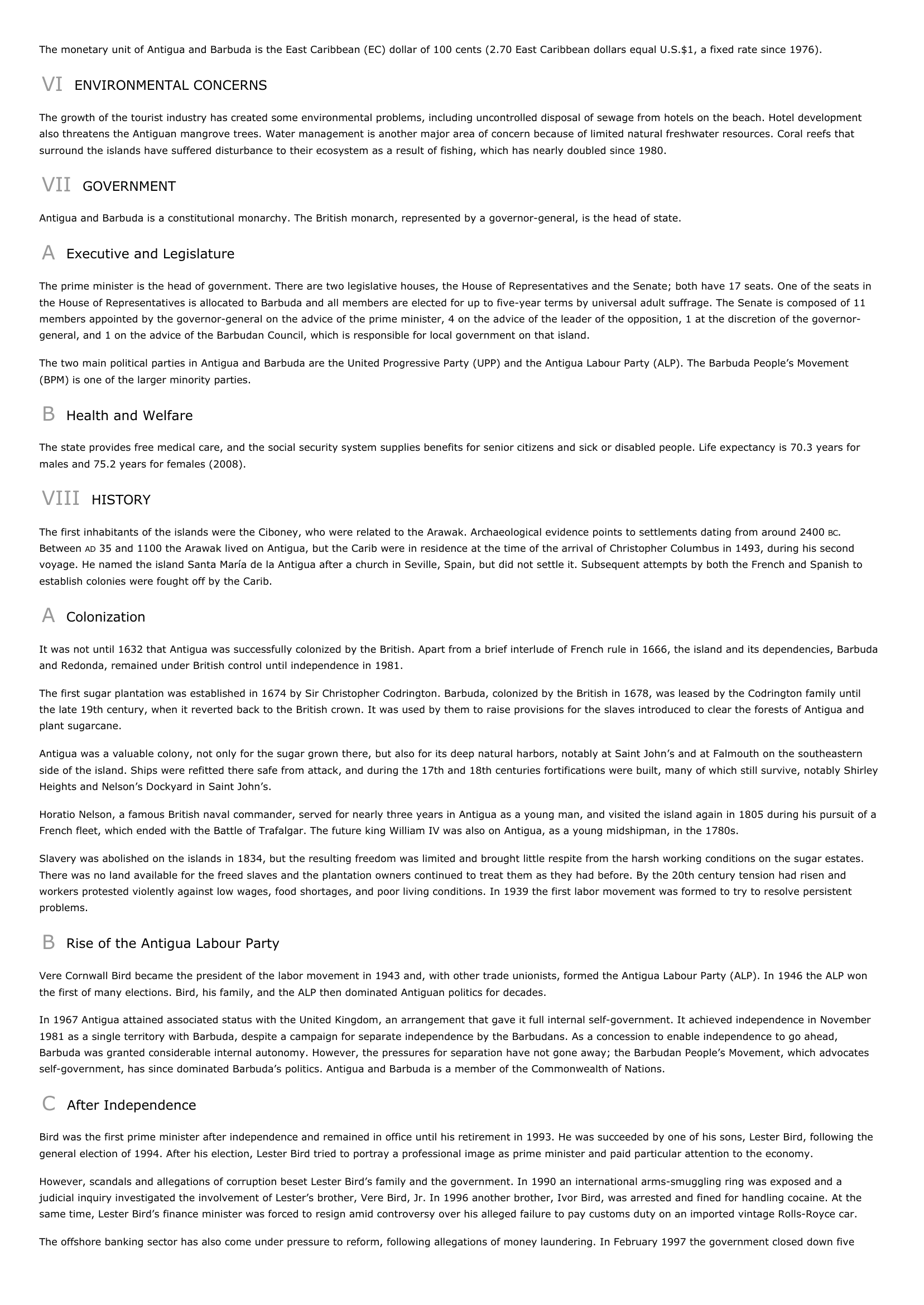