« accused has the right to “confront”—that is, to cross-examine witnesses who testify against him or her at trial.

Those accused also have a right to subpoena (compel)supporting witnesses to testify in court and to have a lawyer assist in their legal defense. G Seventh Amendment In Suits at common law, where the value in controversy shall exceed twenty dollars, the right of trial by jury shall be preserved, and no fact tried by a jury, shall beotherwise re-examined in any Court of the United States, than according to the rules of the common law. Comment: The Seventh Amendment, which does not apply to the states, guarantees the right to a jury in some types of federal civil (noncriminal) trials. H Eighth Amendment Excessive bail shall not be required, nor excessive fines imposed, nor cruel and unusual punishments inflicted. Comment: The courts must allow most criminal defendants out of jail before their trial if the defendants put up a reasonable bail—a financial guarantee that they will come to the trial.

If a person is convicted of a crime, the government cannot impose unreasonable fines or inflict inhumane punishments.

What is “cruel and unusual”has no fixed meaning, and so decisions interpreting the clause are sometimes controversial.

The Supreme Court has generally held that a punishment that is wildlydisproportionate to the crime committed is cruel and unusual.

The Court has also upheld the death penalty against claims that putting someone to death, regardless ofwhat that person did, is cruel and unusual. I Ninth Amendment The enumeration in the Constitution, of certain rights, shall not be construed to deny or disparage others retained by the people. Comment: The Ninth Amendment declares that just because certain rights are not mentioned in the Constitution does not mean that they do not exist.

First, they declare an important ideal—that the people have rights with which no government may interfere.

Placing ideals into the Constitution makes itharder for tyrants to restrict human rights.

Second, they provide the basis for actually securing the rights.

In 1789 statesman Thomas Jefferson wrote James Madisonthat a bill of rights “puts into the hands of the judiciary” a “legal check” against tyranny by the legislature or the executive.

Third, the Bill of Rights, especially the FirstAmendment, helps protect democratic government by barring criminal prosecutions against those who criticize the government and those who hold unpopular beliefs,and by providing a safe haven for minorities who are oppressed in many other countries. III ORIGINS OF THE BILL OF RIGHTS A The English Legal Tradition in America When English immigrants came to the American colonies in the 17th and 18th centuries, most assumed that they would have the same protections againstgovernmental abuses of power that they had in England.

The most important of these were the right to trial by jury and the right of habeas corpus, which preventedthe government from jailing people arbitrarily.

Other personal liberties brought from England to America included the right of accused persons to have legal assistanceat trials, and a ban on excessive fines and bail.

These rights came from several centuries of English legal tradition, recorded in documents such as the Magna Carta of1215, the Petition of Right of 1628, and the English Bill of Rights of 1689, from which the American Bill of Rights took its name.

The assumption of basic legal rights ofcitizens also came out of the English common law, a body of English court-made law that evolved from the 12th century. English settlers in America included many of these protections in colonial laws.

The English Americans decided to codify (write into law) some parts of the common law and to make additions suited to the colonial society.

The 1632 charter for the Maryland colony, for example, declared that all people who were born or who moved therewere entitled to 'all Privileges, Franchises and Liberties' of a native Englishman.

By 1639 the Maryland General Assembly had passed an act for 'the liberties of thepeople.' Residents of the Massachusetts Bay Colony created the Body of Liberties in 1641, an important forerunner of the American Bill of Rights.

The Body of Liberties grantedlimited religious freedom, assured landowners of the equal protection of the laws, the right to petition the government for change, and the use of the writ of habeascorpus.

It also banned punishments considered 'inhumane, Barbarous or cruel' and recognized the right of an accused person to have legal assistance under somecircumstances.

The Body of Liberties also required the presence of several witnesses to a crime before a person could be sentenced to death.

It also granted citizens theright to travel and settle abroad, an important freedom often denied in England. Some colonies created religious protections stronger than those in Massachusetts, even though religious freedom was not part of the English legal tradition.

Religiousintolerance in the Massachusetts Bay Colony spurred some people, including clergyman Roger Williams, to flee to other areas.

Williams went to Rhode Island in 1636,where he started a new colony based on religious freedom and political equality.

Eventually these freedoms were incorporated into the Rhode Island Charter of 1663.This charter banned government repression of religious groups and guaranteed individuals the right to their own beliefs.

The strong religious protections in Rhode Islandmarked out a significant new limit on government power. B Rebellion and Agitation for New Rights By the 18th century, several generations of English Americans in the colonies accepted the basic rights of citizens as part of their birthright. 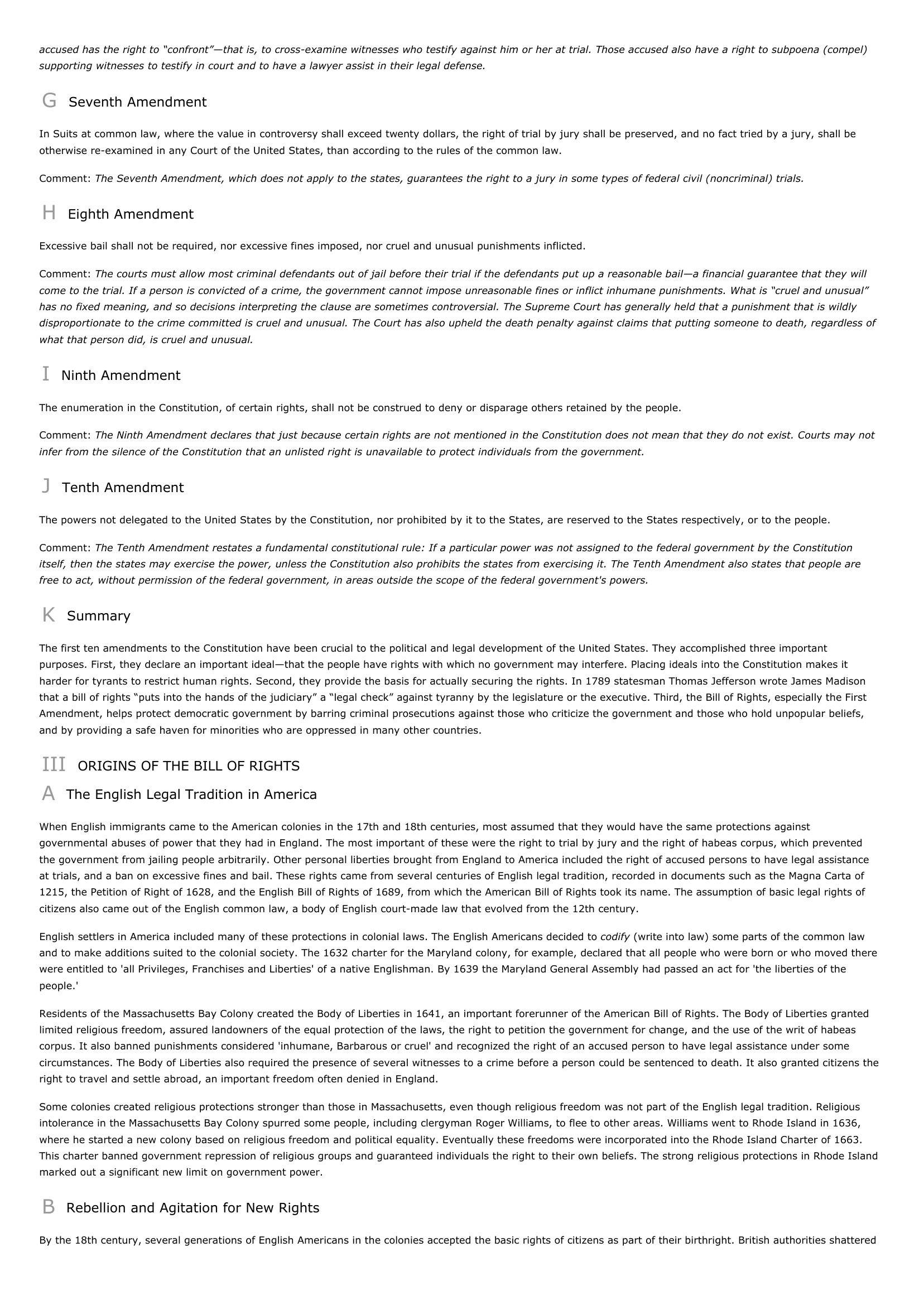