« animals such as zebras.

Unlike most cats, cheetahs hunt during the day, when lions and hyenas that compete with them for prey are less likely to be active.

Still,scientists in Tanzania have observed that cheetahs lose 10 to 13 percent of their kills to lions and hyenas.

Alerted by the panic of a gazelle herd or by the circling ofvultures, lions and hyenas close in and easily drive the more timid cheetah away from a fresh kill. A cheetah usually stalks prey to within about 10 m (about 33 ft) and then bursts into a sprint to close the gap.

About half of these chases result in a kill.

Other big catstypically rely on a piercing bite to the neck to kill prey.

A cheetah’s weak jaw and smaller teeth require that it grasp the throat of its prey until the animal suffocates, atactic other big cats use only when killing prey that is larger than they are. V REPRODUCTION Male and female cheetahs come together for brief mating periods that last one to three days.

Copulation is infrequent and typically occurs at night.

Following a 90- to95-day gestation (the period from conception to birth), about four or five cubs, and sometimes as many as eight cubs, are born in a litter. Cubs are blind and helpless at birth, weighing around 250 to 300 g (9 to 10 oz).

Long gray hairs, which may act as camouflage, appear on the neck, shoulders, andback soon after birth and disappear at about three months.

The cubs stay hidden in a den for about eight weeks, and the mother is extremely careful to avoidattracting predators to the den.

Still, she must be away for up to 48 hours while hunting, and predators often prey on her cubs while she is absent.

At about eightweeks, cubs begin to accompany their mother as she hunts, and they partake in eating the meat of her kills.

Nursing ends when cubs are about 4 months of age.

The cubs stalk, chase, and wrestle with one another, and they will even chase prey that they know theycannot catch.

Cubs do not become truly proficient hunters until they are about 24 months old.

Young leave their mother at 13 to 20 months of age. Female cheetahs reach sexual maturity when they are about 24 months old, while males do not become sexually mature until they are around 30 to 36 months old.Once they reach adulthood, cheetahs may live up to 12 years in the wild and up to 16 years in zoos.

Most wild cheetahs do not live as long as 12 years, however,because they are frequently preyed upon by lions, hyenas, wild dogs, and leopards.

In Tanzania’s Serengeti National Park, about 90percent of all cubs die before they are three months old, and half of these deaths are due to predation.

The period between leaving the mother and reaching adulthoodis also dangerous, especially for males.

Half of them die during this time, largely as a result of wounds received from combat with other males over possession ofterritories. VI EVOLUTION Fossil evidence suggests that the cheetah may have originated about 3 million years ago in western North America.

Fossils have been found in present-day Texas,Nevada, and Wyoming.

Scientists believe that this early cheetah is related to the puma, which today ranges fromCanada to Argentina.

The early cheetah’s body proportions were intermediate between those of a puma and living cheetahs.

Its puma-like features included fullyretractable claws and lower limbs that were not as long as those of the modern cheetah.

Based on skeletal features, this early cheetah is thought to have been a fasterrunner than the puma but stronger and better equipped for climbing than today’s cheetahs.

Some scientists consider the presence of these early cheetahs on theAmerican prairies the primary reason living pronghorns run so fast, there being no living predator in North America that can match the pronghorn in speed. VII CHEETAH STATUS In the last century the cheetah’s range and numbers have steadily declined.

Cheetahs were declared extinct in 1952 in India, where they were once tamed and used forhunting, and they have not been seen on the Arabian Peninsula since 1950.

Cheetahs were extremely rare in North Africa by the 1960s and are now gone from thatarea.

In sub-Saharan Africa, cheetahs exist only in low numbers except in a few places, such as Namibia, where lions and hyenas have been exterminated. Cheetahs have disappeared largely due to uncontrolled killing by humans for sport.

Hunting by humans has also depleted the cheetah’s preferred prey.

Over the 20th century much open pastureland was converted intofarmland.

Farmers who live in cheetah habitat often kill the cats, which threaten their domestic livestock. The United States Fish and Wildlife Service lists the cheetah as endangered on its Endangered Species List.

The cheetah is listed as vulnerable on the Red List ofThreatened Species, compiled by the World Conservation Union (IUCN), a nongovernmental organization that compiles global information on endangered species.

Thecheetah is also protected by the Convention on International Trade in Endangered Species of Wild Fauna and Flora (CITES), which bans trade in cheetahs and their bodyparts, except for a quota of trophies (animals hunted for sport), taken in Namibia, Botswana, and Zimbabwe. In addition to the protection offered by inclusion on these lists, cheetahs are the focus of a number of conservation organizations.

The Cheetah Conservation Fund(CCF), based in Namibia, is an international conservation organization that works with the Namibian government, local communities, and farmers to establish strategiesto limit the conflict between farmers and cheetahs, protect cheetah habitats, and promote sustainable cheetah populations.

Among the programs initiated by the CCF isthe Livestock Guardian Dog Program.

The CCF provides farmers with trained dogs that protect livestock from cheetahs.

In another program, farmers are encouraged toinject their cattle with a harmless chemical that makes the animals taste repulsive to the cheetah.

This method has also been successful at limiting cheetah attacks onlivestock.

The CCF has also established education programs so that farmers are more likely to contact the CCF to help them find a way to get rid of problematiccheetahs without killing them. Many farmers trap cheetahs to prevent them from attacking livestock.

In some cases these traps catch cheetahs indiscriminately—many of the trapped animals do notprey on livestock.

The AfriCat Foundation, also based in Namibia, works with farmers to relocate trapped cheetahs to wildlife preserves.

The foundation also helpsfarmers develop livestock farming techniques that prevent or reduce livestock losses due to predator cheetahs. Cheetahs generally do not breed readily in captivity.

To help the cheetah population in captivity, breeding programs have been established in zoos around the world.Often in the past zoo managers have had a poor understanding of the animal’s lifestyle in the wild.

As scientists gained a better understanding of the lifestyle habits ofcheetahs in the wild, they attempted to imitate certain aspects in captivity.

Males and females are kept separated.

An unrelated male and female are reintroduced only when the female is in estrus,a period when she is receptive to mating.

Mothers are provided with nest boxes and natural landscaping that offer protected areas to birth their young and protectthem.

As a result of these efforts, 100 cheetahs have been born in the Wild Animal Park since 1981. Zoo scientists are also working on ways to enhance cheetah breeding through assisted reproductive technologies.

In several institutions in North America, ten litters ofcheetahs have been produced using artificial insemination, in which sperm from the male are introduced into the reproductive tract of a female in order to enhance theopportunity for fertilization.

In 1995 at the Rio Grande Zoo in Albuquerque, New Mexico, scientists used sperm collected from a wild cheetah in Namibia to fertilize eggsin a laboratory.

The eggs had been taken from a captive female cheetah, and the resulting embryos were inserted into the mother’s uterus; the mother then underwent. » 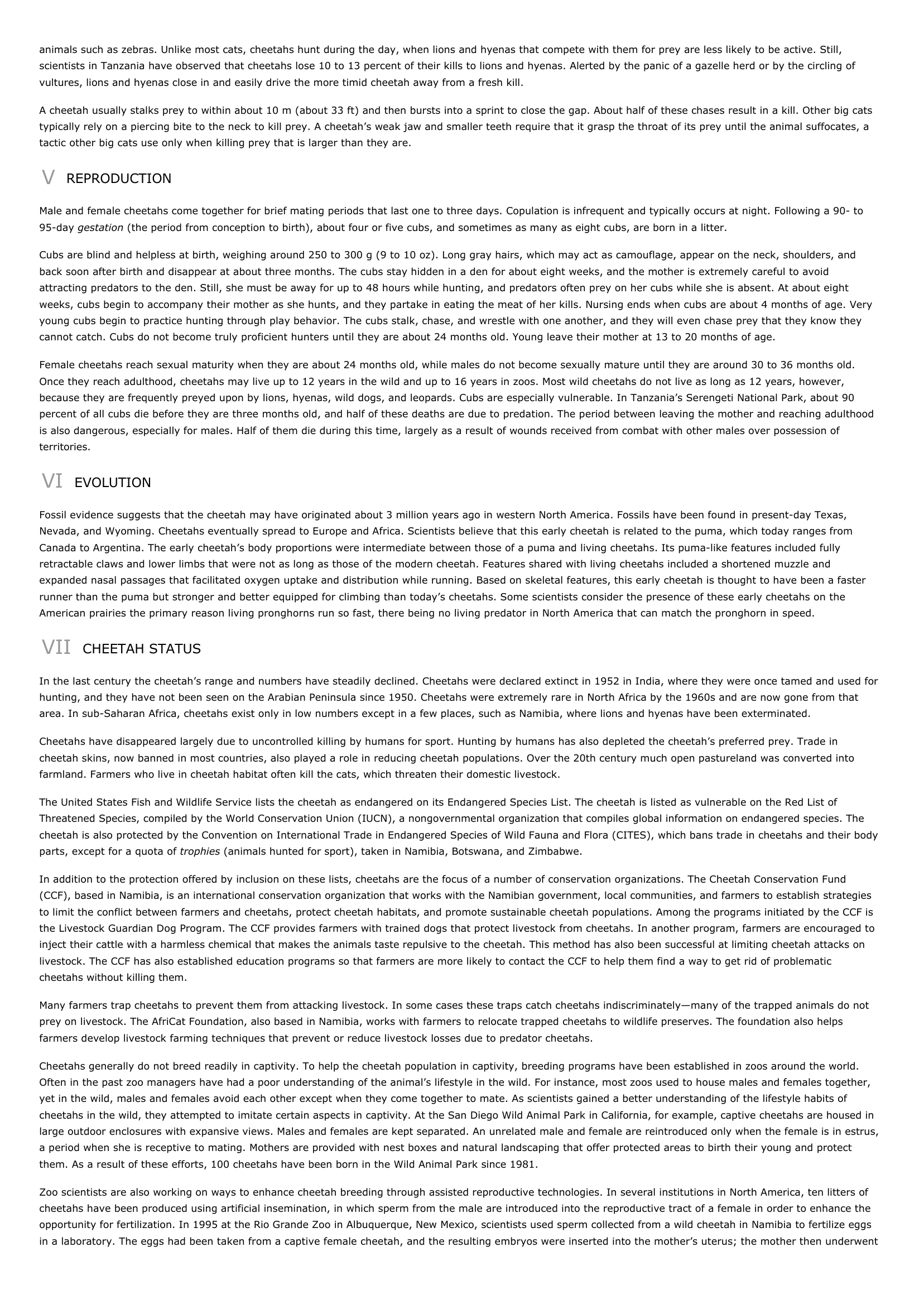