Claude Monet I INTRODUCTION Monet's Gardens at Giverny From 1890 until his death in 1926, Claude Monet lived and painted in the small village of Giverny, near Paris.

« small works, Monet’s quick daubs of fresh colors aptly capture the movement of the water and gaiety of the scene. Despite his father's disapproval, in 1870 Monet married Camille, who had already borne him a son.

To escape the Franco-Prussian War (1870-1871), during whichGerman troops threatened Paris, the couple went to London, then to Holland.

They returned in 1872 and settled in Argenteuil, a sailing center on the Seine Riveroutside Paris.

Monetpainted Impression: Sunrise in 1873, but when he signed the painting later, he wrongly recorded the date as 1872.

Thepainting was stolen in 1985 from its home in the Musée Marmottan, Paris, but it was recovered in 1990.Archivio Iconografico, S.A./Corbis The painters who became known as impressionists began exhibiting together in 1874.

They held eight exhibitions between 1874 and 1886, and although Monet did notparticipate in all of these, he became the most celebrated member of the group, and remains so today. In the 1874 exhibition, Monet showed four pastels and five paintings, among them a work entitled Impression: Sunrise (1872-1873, Musée Marmottan, Paris).

Inspired by this title, French art critic Louis Leroy coined the term impressionist in a satirical review of the exhibition.

His comments criticized the artists for painting so loosely and neglecting to blend their brushstrokes carefully in order to achieve the polished effect that was then expected.

Although Impression: Sunrise is an elegantly balanced composition, it demonstrates much of what was radically new about the impressionist manner.

Monet’s swift strokes capture a momentary effect of light onwater in a busy port, while mist and smoke blur the angular forms of sailboats. Monet’s first wife, Camille, died in 1879, and soon afterward Monet set up home with Alice Hoschedé, the wife of one of his most important patrons, and their respectivechildren.

The Hoschedé family had recently suffered a disastrous bankruptcy, and financial concerns seem to have directed many of Monet’s career strategies in theyears that followed. In 1880 Monet decided, to the great annoyance of his fellow impressionists, to exhibit once again at the official Salon.

He also began to sell his work regularly throughprivate dealers.

Monet traveled throughout France during the 1880s, tackling new and challenging motifs, such as the rocks off the island of Belle Île, the stormyAtlantic coast, and the more idyllic atmosphere of the Mediterranean seacoast. V SERIES PAINTINGS Monet’s Water LiliesFrom about 1895 on, French painter Claude Monet frequently painted the lily pond in his garden at Giverny, a village nearParis.

The canvases are large in size, and the lilies are painted at close range and seem to dissolve into the shimmeringwater surrounding them.

Several panels of Les Nymphéas (The Water Lilies), including the painting shown here, line thewalls of the Orangerie, a museum in Paris.Erich Lessing/Art Resource, NY In 1877 Monet had painted a series of works that capture the smoke-filled Saint Lazare railway station in Paris at different times of day.

In the 1890s Monet returned tothis idea of a concentrated series of paintings based on a single motif.

In his series of Haystacks , begun in 1890, the rather ordinary subject matter allowed Monet to emphasize subtle changes in light and weather conditions.

Each painting has such an individual character that the series also seems to chart Monet's shifting feelings infront of nature.

In 1891 French art dealer Paul Durand-Ruel showed 15 of the Haystack paintings in his Paris gallery.. » 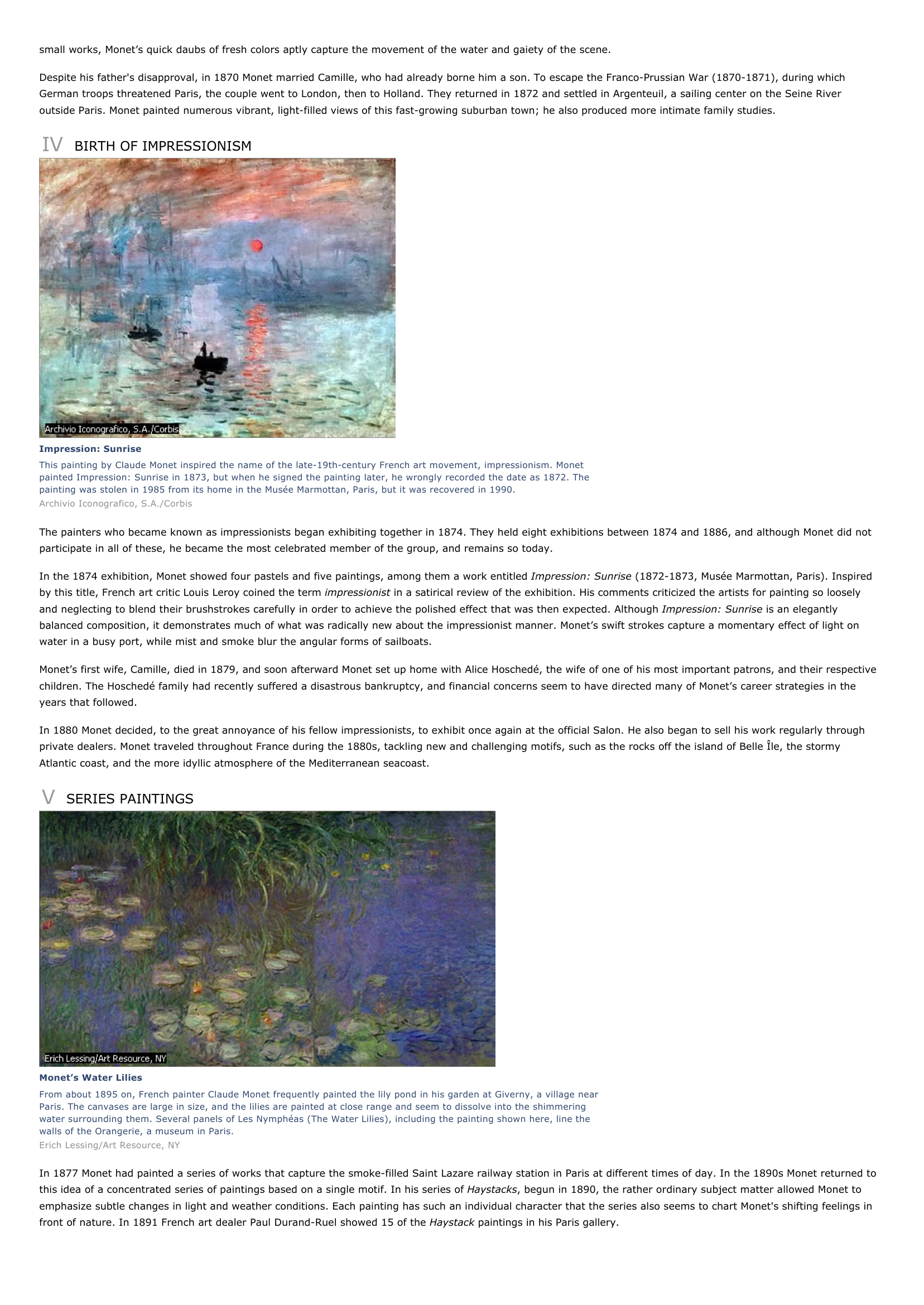