« Québec conference seemed in many ways to give Macdonald the centralized union he wanted.

The federal government would control banking, finance, defense,transportation, and commerce among the provinces.

It would also have far greater powers of taxation than the provincial governments would have.

In private,Macdonald predicted that the central government would be so strong that it would soon swallow up the provinces completely. Yet the Québec resolutions were vague or contradictory enough to give equal hope to many who wanted more power for the provinces.

In LowerCanada, Cartier’s party announced that this meant that the provincial government would have the power to promote the French Canadians’ distinctive nationality.

Infact, the Québec resolutions were open to opposing interpretations, and it would remain for the future to see how they would work out in practice. V THE APPROVAL PROCESS The resolutions were debated and ratified by the legislative assembly of Canada in early 1865.

Elsewhere they ran into difficulty.

And New Brunswick voters turned their pro-federation government out of office in thegeneral elections of 1865.

However, the pro-federation campaign got a boost the next year, shortly before election day, when a band of Irish American Fenians raidedthe colony.

These veterans of the American Civil War hoped to capture British territory in North America and thereby force Britain to grant independence to Ireland.

Butthe raid only frightened the people of New Brunswick and persuaded many that federation was necessary for the sake of defense.

On election day the voters returnedthe federalists to power. In the winter of 1866 and 1867, representatives of Canada, New Brunswick, and Nova Scotia met with British authorities in London to finalize the details of their projectand write it up in legal form.

In the official version the scheme was now called a confederation rather than a federation.

It was unclear what the distinction was, andCanadians have always used both words to mean the same thing.

The new confederation would take the name Canada, and the old province of Canada would becometwo provinces: Ontario (the former Upper Canada) and Québec (the former Lower Canada). The British Parliament passed the British North America Act, creating Confederation in March 1867.

The new constitution went into effect on July 1, 1867.

Macdonaldbecame the first prime minister of the new Dominion of Canada.

Within a year, the Confederation was seeking to expand. VI EXPANSION Canadians were looking north and west to the immense territory between the Great Lakes and the Rocky Mountains.

Officially under the control of the Hudson’s BayCompany, this territory was still inhabited chiefly by its indigenous peoples, and the fur trade was still the basis of its economy. In March 1869 the Canadian government came to an agreement with the Hudson’s Bay Company and British authorities.

The company would surrender its claim on theland in return for compensation in cash and real estate, and Britain would transfer the territory to Canada.

This would open the western prairies to settlement, createnew markets for Canadian railroads and manufactures, and strengthen the British hold on a region that many feared might otherwise be appropriated by the UnitedStates. But plans for the Canadian takeover were upset in the fall of 1869, when armed Métis, a mixed white-indigenous people living in the Red River colony (the regionaround the present-day city of Winnipeg), organized a resistance movement and prevented Canadian officials from entering the territory ( see Red River Rebellion).

The Canadian government was forced to offer guarantees for Métis property and other rights.

As a result, the Red River region entered Canada as a province, calledManitoba, in 1870. Beyond the prairies and the Rockies lay the province of British Columbia.

In 1871 it too joined the Confederation, giving Canada a coast on the Pacific Ocean andallowing the railroad system to be extended across the continent.

The federal commitment to build the railroad was one inducement to British Columbia to join.

A similar promise finally brought PrinceEdward Island into the Confederation in 1873. Meanwhile, settlement of the prairies had begun quickly after the area was annexed by Canada, and by 1905 the population was large enough for local self-government.

That year, two new provinces, Alberta and Saskatchewan, were established in the region between Manitoba and the Rocky Mountains. Newfoundland did not join Canada until 1949.

It took two referendums, but Newfoundland’s people finally decided to join the Confederation they had rejected for theprevious 85 years. Contributed By:Arthur I. 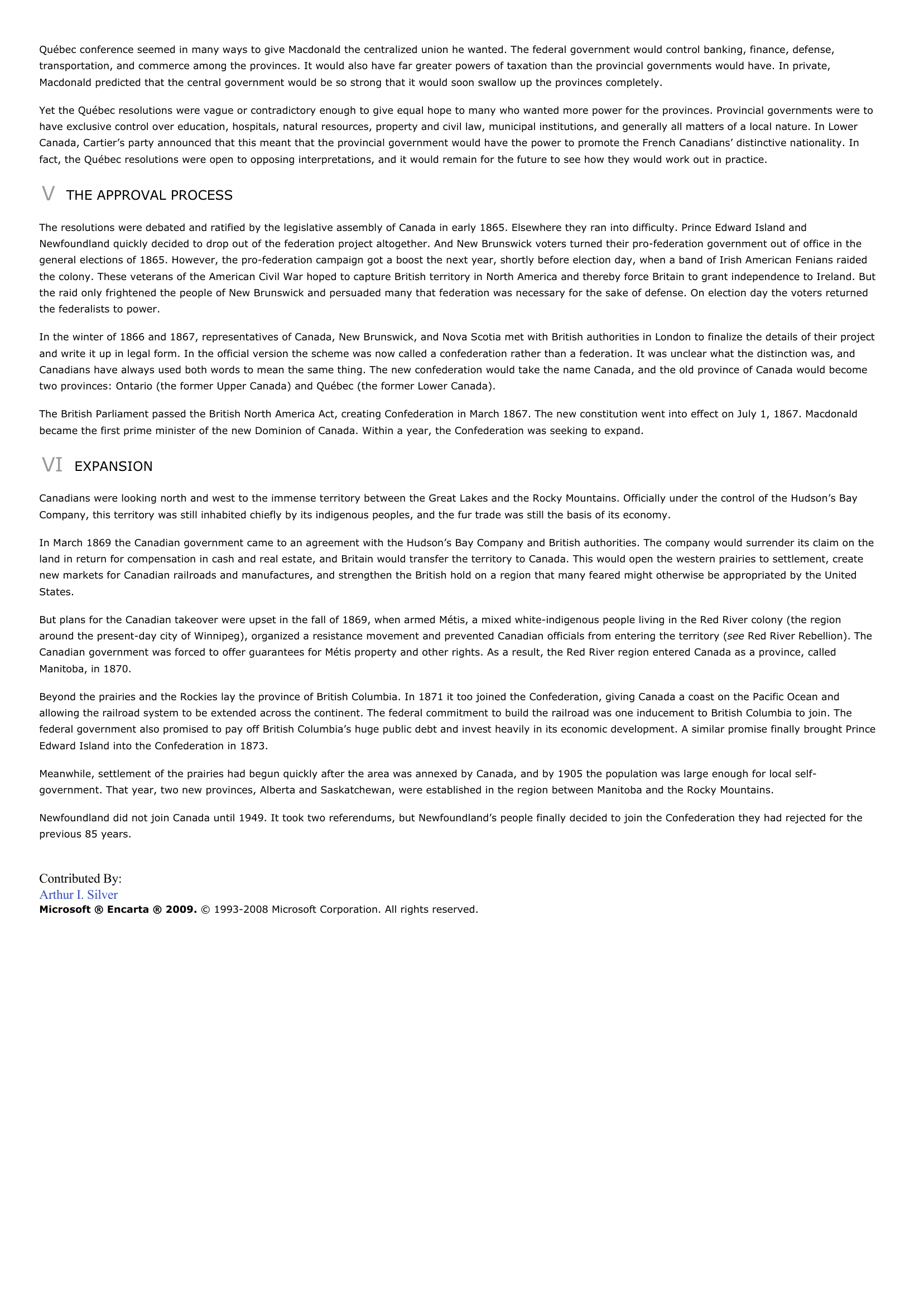