« Catholic challenges and plots persisted through much of Elizabeth’s reign, and Elizabeth reacted to them strongly.

In 1569 a group of powerful Catholic nobles innorthern England rose in rebellion but were savagely repressed.

The northern earls were executed, their property and those of their followers was confiscated, and theirheirs were deprived of their inheritance.

In 1570 the pope excommunicated Elizabeth, sanctioning Catholic efforts to dethrone her.

In 1571 an international conspiracywas uncovered to assassinate her in favor of her cousin, Mary, Queen of Scots.

Although Mary was beheaded in 1587 after years of being at the center of Catholic plotsagainst Elizabeth, such plots did not end until England defeated the Spanish Armada in 1588. Elizabeth’s battles against the Puritans were less conclusive.

She suspended Archbishop of Canterbury Edmund Grindal when he would not punish Puritans who refusedto kneel or make the sign of the cross.

She also imprisoned a member of Parliament in 1576 for introducing a bill to change the prayer book, and she refused to acceptthe Lambeth Articles of 1595, which contained a Calvinist, and more radical, interpretation of the doctrine of predestination.

But Elizabeth’s efforts did not stop thePuritans from criticizing the established church, attacking bishops, and converting others to their views.

The significance of the Elizabethan religious settlement is that itwas able to hold the vast majority of the people together, despite being a compromise few would have chosen. V ELIZABETHAN GOVERNMENT The difficulties Elizabeth experienced governing the English state were enhanced by prejudices against women rulers.

Though she presented herself in the traditionalimages of the monarchy, such as carrying the sword of state, commissioning a portrait showing her bestriding the counties of England, and even appearing in armor,Elizabeth realized the importance of securing the cooperation of powerful men in order to rule effectively.

She made extensive use of the Privy Council and summonedten parliaments during her reign.

She used Parliament to raise taxes and to endorse her policies, but also allowed its members to suggest laws regarding local issues,something rarely permitted by prior monarchs.

The House of Lords and the House of Commons both grew in size during her reign, but they remained councils of thequeen rather than parts of an independent legislature.

When she did not like the advice Parliament offered, she ended its sessions. Elizabeth effectively expanded royal government by increasing the role of sheriffs in the counties and by relying upon justices of the peace to perform the basicadministrative work of local government.

Thousands of gentlemen served in this capacity, each an official, if unpaid, member of the regime.

Meeting in quarter sessions(that is, in sessions held four times a year), justices enforced everything from the Poor Laws to statutes against theft. At the center of her government, Elizabeth was fortunate in having a succession of capable ministers, including Sir Nicholas Bacon, Sir Francis Walsingham, and RobertDudley, earl of Leicester, who was her personal favorite.

She favored Leicester so extensively their relationship became the subject of rumors.

But the ablest of allElizabethan ministers was William Cecil, 1st Baron Burghley, who held the offices of secretary and treasurer.

Burghley served the queen loyally for 40 years and morethan anyone else guided Elizabeth’s policies. Burghley’s lifelong concern was for the queen to provide an heir for succession.

Having refused suitors pressed upon her when a princess, as a queen, Elizabeth wasnever able to make a decision to marry and she had no desire to share power with a husband.

She rejected her sister Mary’s husband, Philip II, king of Spain, whowished to remain allied with English naval power, as well as nearly every eligible European royal bachelor, including a future king of France.

At first Burghley fearedElizabeth would marry his rival, the earl of Leicester, whose wife had died under mysterious circumstances.

Then he feared Elizabeth might suddenly die, throwing thekingdom into chaos, a fear magnified by her bout with smallpox in 1562. The failure to settle the succession encouraged aristocratic factions to grow around the queen.

Until her execution, Mary, Queen of Scots, was a focus of intrigue.

In herprime, Elizabeth was adept at balancing competing claimants for her favor, keeping them loyal and dependent.

But toward the end of her reign, the contest betweenBurghley and Robert Devereux, earl of Essex, led to an open rebellion against her.

Essex’s attempt to overthrow Elizabeth in 1601 was successfully put down, but itdemonstrated that the queen’s power had weakened. VI FOREIGN POLICY The failure to secure her succession was also a factor in the international struggles for power in which England engaged.

Because she would not marry a Catholic prince,she was drawn into the conflicts of European Protestants.

Elizabeth came to the throne in 1558 at the end of a disastrous war that her sister Mary fought againstFrance.

One of Elizabeth’s first acts was to conclude a treaty that gave up English control over the French port of Calais, a blow to England’s prestige.

Despite this truce,trouble with France continued over developments in Scotland.

Mary, Queen of Scots, a Catholic, was married briefly to the king of France, and after his death in 1560returned to rule Scotland.

But Scotland was undergoing its own Protestant Reformation that was supported by Elizabeth and, with France’s assistance, opposed byMary.

In 1568 Mary lost her Scottish crown and was exiled to England, where she continued to conspire against Elizabeth. A similar struggle took place on French soil in 1562 and 1563, as French Protestants, supported by Elizabeth, fought for religious freedom from their Catholic monarch.English military expeditions to Scotland and France proved expensive and ineffective.

Troops were badly trained, poorly equipped, and none too eager for battle.

Mostimportantly, Elizabeth never gave her wholehearted support to the French Protestants, whom she regarded as rebels against their monarch. The most significant English international expeditions were in support of the Dutch Protestants.

In 1581 the Dutch, then part of the Spanish Empire, proclaimed theirindependence, which was contested by Philip II of Spain, a Catholic.

Spain was the most powerful nation in Europe, and the Dutch could not hope to survive as anindependent nation without outside help.

The earl of Leicester persuaded a reluctant Elizabeth to support the Dutch Protestants, and in 1585 he was given command ofan army that fought with the Dutch.

The campaign was a disaster—not only did it fail to prevent the loss of the crucial port of Antwerp, but it also roused the anger ofPhilip II against England. Philip feared that English assistance would hinder his efforts to reconquer the Dutch, especially since English ships could easily send vital supplies.

In 1587 Philip beganorganizing an immense naval fleet, the Spanish Armada, for a direct attack upon England.

His objectives were to destroy the English navy, force Elizabeth out of thewar in the Netherlands, and gain concessions for English Catholics.

The Spanish Armada, one of the most powerful fighting forces ever known, was no match for the“Protestant wind” that blew many of the Spanish ships off course in August 1588, or for the smaller, swifter English vessels that were able to fire cannonballs morequickly than the Spanish galleons.

The defeat of the Spanish Armada was the high point of the queen’s reign and united the nation.

But it did not end the war withSpain, which continued for the remaining 15 years of Elizabeth’s life.

She died on March 23, 1603, and was succeeded by her closest relative, James VI of Scotland, whobecame James I of England. VII ASSESSMENT When Elizabeth died, one of the great epochs of English history ended.

Her 45-year rule decisively shaped the future of England as a stable monarchy governedthrough the cooperation of crown and local elites.

The roles played by Parliament and the justices of the peace, two of the most characteristic of all English institutions,solidified during her reign and were indispensable thereafter.

The Protestant religion was firmly established as England’s faith, and though religious conflict was to be aserious problem for another century, it was within the context of the Elizabethan church settlement that the battles were fought.

The defeat of the Spanish Armada wasa cause for national celebration, and “Glorious ’88” was spoken of generations later when Elizabeth’s birthday was still celebrated as a national holiday. 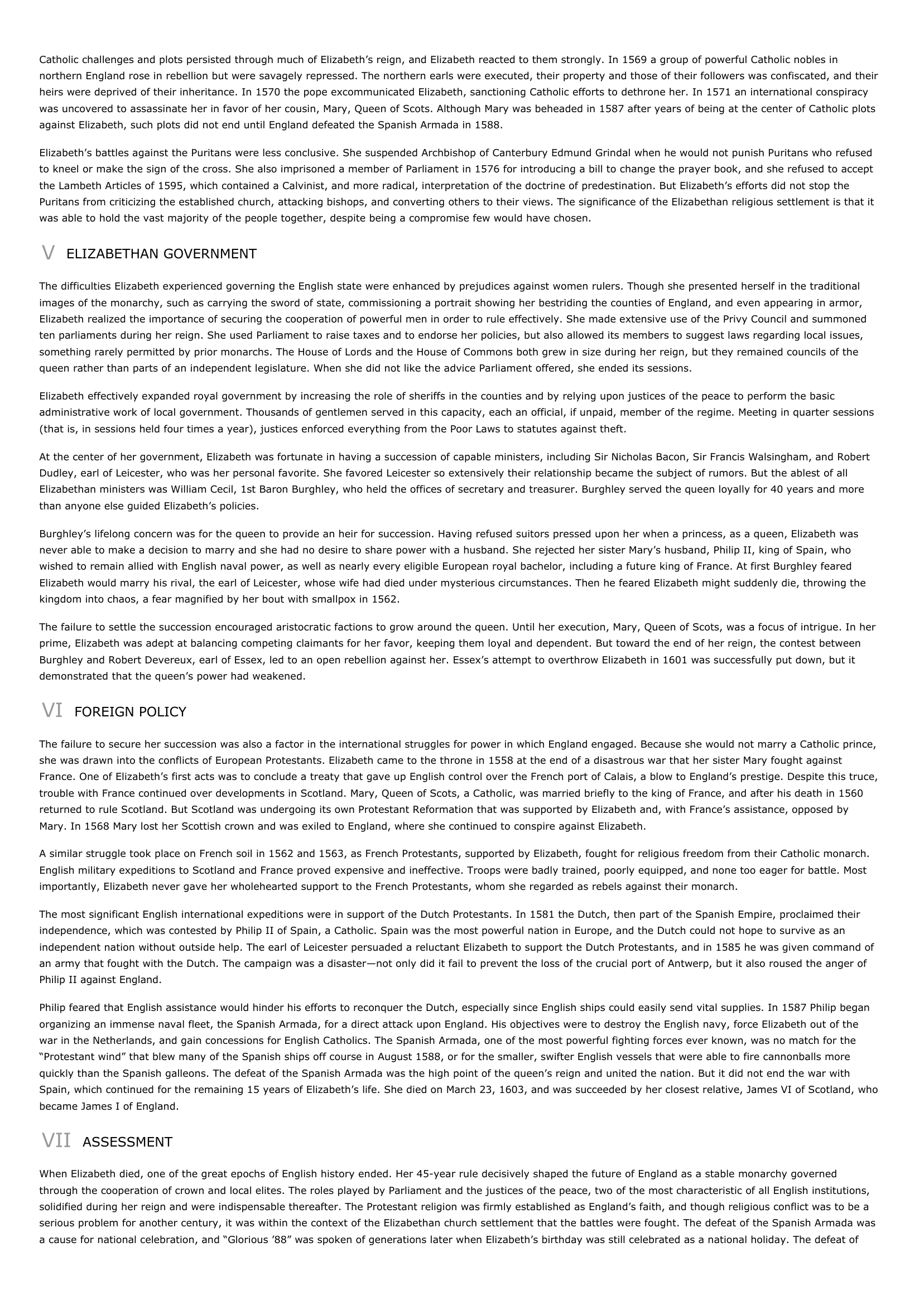