« died in August 1227, in his summer quarters in the district of Qingshui south of the Liupan Shan (Liupan Mountains) in Gansu, China. IV THE MONGOL FORCES Genghis Khan unleashed a seemingly invincible military force.

Although usually outnumbered, his forces prevailed on the battlefield through absolute discipline, a well-understood chain of command, superior mobility, and innovative military tactics. The Mongol forces were organized into several formations of 10,000 horse-mounted soldiers, the touman .

Their tactical deployment usually relied on surprise attacks on the enemy’s flank and rear, followed by heavy cavalry assaults.

Communication was by signal flags and drumbeats, and the mounted formations responded quickly tocommands from the Mongol generals.

Once an enemy’s initial resistance was broken, the Mongols would overrun the territory with a speed not to be duplicated until thetank warfare of the 20th century. Mongol soldiers were well trained in marksmanship and horsemanship.

A soldier was clad in armor of leather strips lacquered to keep out water.

His bow, backed withhorn or sinew, was one of the most powerful in the world.

After showering the enemy with arrows he would change to his lance or to a curved sword and charge forclose fighting. V LEGACY Genghis Khan had many wives and concubines, but it was Borte, his first and chief wife, who gave birth to his four most famous sons: Jochi, Jagatai, Ögödei, and Tolui.Jochi’s son Batu founded the Golden Horde, a powerful Mongol state in Russia and Eastern Europe.

Jagatai gave his name to a state that he founded in Central Asia.Ögödei was designated by Genghis Khan to succeed him, and he ruled Mongolia and northern China.

Tolui was the father of Mangu Khan, ruler of the unified MongolEmpire from 1251 to 1259; Kublai Khan, who founded the Yuan dynasty in China; and Hulagu, who founded the il-Khanid dynasty of Persia. Genghis Khan knew no language but Mongolian, and it has been said that to the end of his days he remained at heart a robber chieftain.

No mere bandit, however,could have conceived or undertaken the great campaigns against China and Western Asia, and in fact, though he spoke no foreign language, Genghis Khan was notwithout knowledge of the civilized nations beyond the borders of Mongolia.

Already at the beginning of his career he counted among his followers certain Muslimmerchants from Central Asia, and later he could rely also upon the counsel of Chinese advisers. It was, however, mainly on native foundations that his empire was built.

The legal code which he instituted, known as the Great Yasa, was based upon Mongolcustomary law.

The instrument of his victories, the superbly efficient Mongol army, seems to have owed nothing to foreign models.

It was developed and perfected inintertribal wars before it was turned, with irresistible effect, against the nations of Asia and Eastern Europe.

It is, in fact, as a military genius that Genghis Khan lives inhistory. As such he was the equal of Alexander the Great or Napoleon I, and neither of the latter two achieved such vast or such enduring conquests.

His grandsons founded dynasties in China, Persia, and Russia, and his descendants ruled in Central Asia for centuries. Microsoft ® Encarta ® 2009. © 1993-2008 Microsoft Corporation. 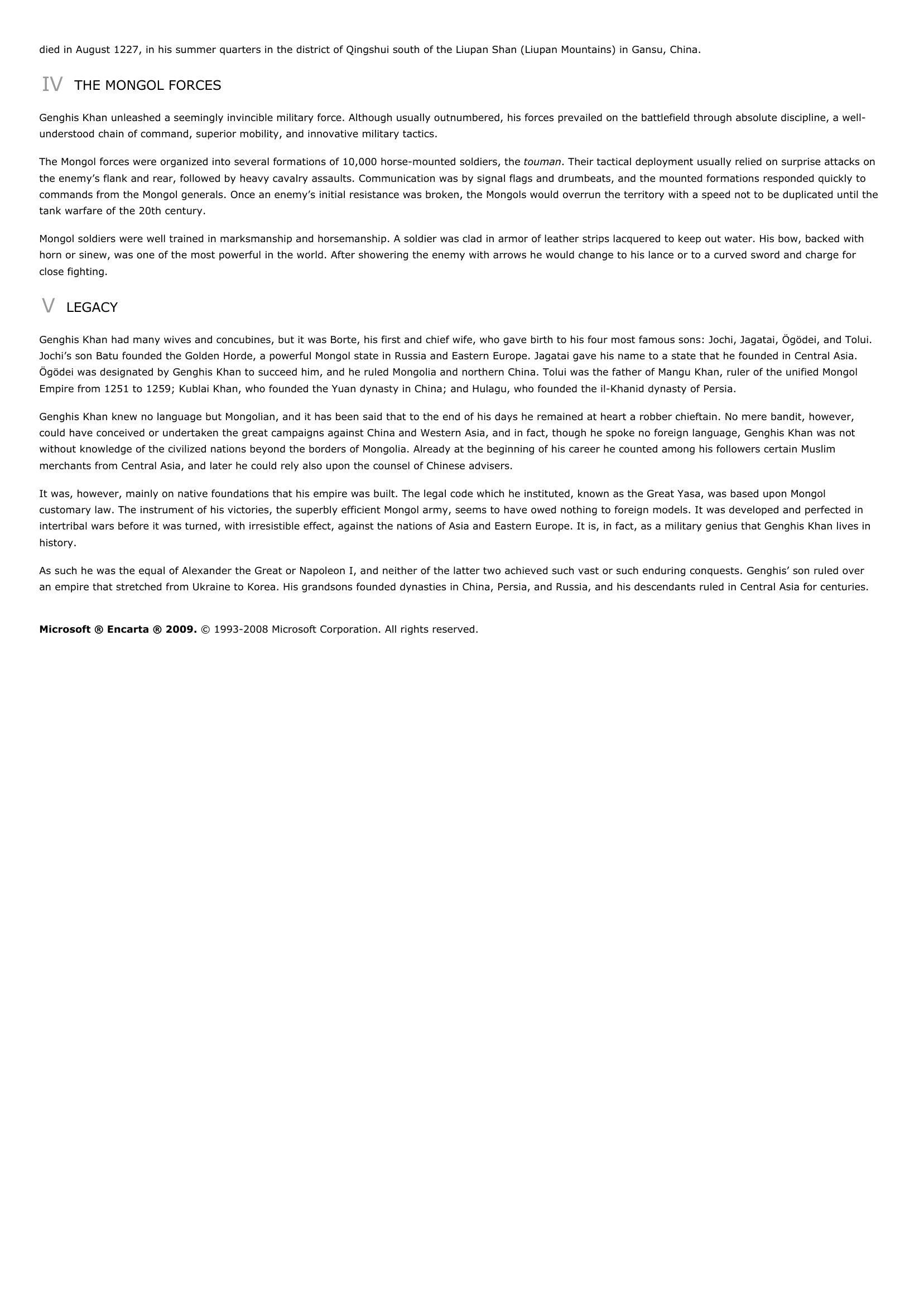