Environmental concernsand political instability in neighboring Liberia have delayed exploitation of high-grade iron ore from Mount Nimba. In 1999 the national budget included $466 million in revenues and $414 million in expenditures.

Conakry has an international airport. In 2000 there were 51 radio receivers and 46television sets in use for every 1,000 inhabitants.

Television and radio broadcasting is operated by a state-run companybased in Conakry. V GOVERNMENT A military coup overthrew Guinea’s government in 1984.

The military rulers oversaw the writing of a new constitution, which was approved in a national referendum in1990.

It authorized a transitional government to oversee the change to a two-party, civilian system with a unicameral legislature of 114 seats and universal adultsuffrage.

In 1992 amendments authorized an unlimited number of political parties.

The head of state is a directly elected president.

In 2001 a constitutional amendmentremoved the two-term limit on the presidency and extended the presidential term of office from five to seven years. VI HISTORY Parts of northern and eastern Guinea were within the empires of Mali and Songhai, and the ruling classes among the Mandinka population were early introduced toIslam.

The spread of Islam throughout Guinea was largely a result of the missionary activities of the Torobde clan of the Fulani, a pastoralist people, who established atheocratic state in highland areas of the Fouta Djallon in the early 18th century.

By the mid-19th century, continual Islamic proselytizing had converted most of thepopulation with the exception of those living in the Mossi states, who resisted and retained their animistic beliefs.

In the 1880s Samory Touré, a Mandinka adventurer,used modern weapons to seize control over much of the interior. The French government in the last quarter of the 19th century authorized annexation by conquest and diplomacy of much of the western Sudan.

Its armies capturedTombouctou, pushed French claims as far as Lake Chad, and went on to occupy the Guinea coastline.

In 1891 Guinea was declared a French colony separate fromSenegal.

Samory provided the only concerted resistance to French occupation of coastal and highland Guinea until he was finally defeated in 1898.

The next year theupper Niger districts were added to the territory, and in 1906 Guinea became part of the French West African Federation, headed by a governor-general.

Many Guineans were employed there and allowed to organize their own trade unions.

Sékou Touré,a great-grandson of Samory and the head of the powerful General Union of Workers of Black Africa, led the agitation in the 1950s for more African representation ingovernment.

In 1952 Touré became the secretary general of the Democratic Party of Guinea. In the September 1958 plebiscite, Guinea was the only territory to reject the constitution of the Fifth French Republic.

This caused immediate severance of political andeconomic ties with France.

Guinea achieved independence on October 2, 1958, with Touré as president of the new nation. Once independent, Guinea turned to the Eastern European countries for assistance.

In 1961Guinea joined with Ghana and Mali in the Union of African States, a loose federation that lasted only two years.

After surviving several assassination attempts, Touréaccused French officials of plotting his overthrow and broke off relations with France in November 1965.

In 1982 anew constitution was issued that strengthened the power of the ruling Democratic Party of Guinea.

Conté became president and leader of the Military Committee for National Rectification.

He freed politicalprisoners, began to dismantle the socialist system, reduced the power of the army, and improved relations with France and neighboring states.

In the late 1980s Guinea sought to attract Western capital by liberalizing investment regulations. In 1990 a new constitution was adopted authorizing a transitional committee to establish the framework for a civilian government.

His rule was challenged by a widespread army mutiny in 1996 and the outbreak of an armed rebellion in2000.

Most opposition parties boycotted the 2003 election and accused the government of rigging the vote. Microsoft ® Encarta ® 2009. © 1993-2008 Microsoft Corporation. 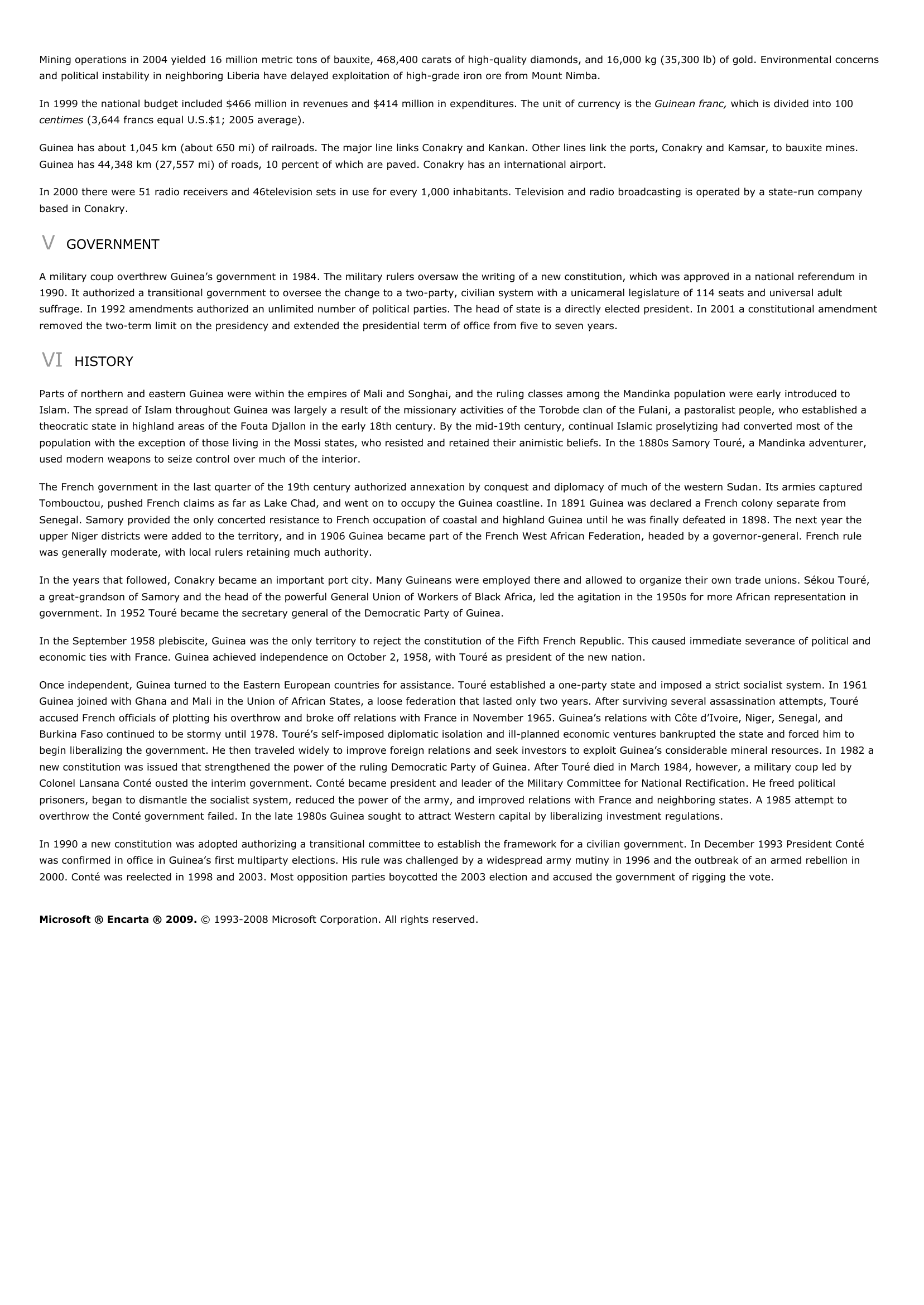