« However, these reforms faced serious opposition.

The feudal barons formed an alliance and rebelled against Wang Mang.

They were joined by members of the Liufamily, who were descended from Jingdi (Ching-ti), a former Han emperor, and a civil war followed.

As the empire fell into disorder, militant secret societies formedarmed bands and attacked villages and towns.

Wang Mang had believed that proper institutions would eventually bring peace to China, but in AD 23, an army led by the Liu clan breached the gates of Chang'an, murdered Wang Mang, and restored the Han dynasty. D The Eastern Han During the civil war, the old capital of Chang'an was largely destroyed, and the victorious Liu family moved the capital eastward to Luoyang (Lo-yang), in what is nowHenan province.

The name Han was again used, but Chinese historians refer to the dynasty after Wang Mang as the Eastern, or Later, Han.

Its first ruler, Guangwudi(Kuang-wu-ti, 5 BC-AD 57), was vigorous and assertive.

The borderlands were reoccupied, the Xiongnu were again defeated, and tribute was again collected in Korea and Annam.

Like others of his ancestors, Guangwudi became a patron of Confucian learning and worked toward government reform. His successors were different.

Many took the throne in their teens, and the empire was actually controlled by ministers who encouraged the young emperors to lead alife of dissipation.

This usually led to an early death, another child emperor, and a continuation of rule from behind the scenes.

An armed Daoist cult, the Huangjin (Yellow Turbans), spearheaded a revolt that spread through much of the empire.

Generals and ministers plotted coups and counter-coups, with the child emperors as little more than pawns.

Finally, in 220, the last Han emperor, Xiandi (Hsien-ti), who had been placed on the throne at age eight, formally abdicated in favor of Cao Pi (Ts'ao P'i), the son of his chief minister.

Cao Pi proclaimed himself the firstemperor of the new Wei dynasty.

This date marks the beginning of the so-called Period of Disunity, which lasted from 220 to 589. E The Period of Disunity Chinese unity was fractured, and three rival states—Wu, Wei, and Shu—contended for power in the territory of what had been the Han empire, waging incessantwarfare against one another.

In 265 Sima Yan (Ssu-ma Yen), a general of the Wei dynasty, took over the throne and established the Western Jin (Chin) dynasty (265-316) in northern China.

By 280 he had reunited the north and south under his rule.

Soon after his death in 290, however, the empire began to crumble.

The non-Chinese tribes of the north seized the opportunity to attack.

Invasions began in 304, and by 317 the tribes had taken northern China from the Jin.

In 589 Yang Jian (Yang Chien), from the non-Chinese Northern Zhou state, succeeded in conquering all theother states and reuniting China under what became known as the Sui dynasty (581-618). III ECONOMY During the Han empire, the Chinese were an agricultural people.

Wheat and millet were grown in northern China, as they had been for centuries.

Rice, which canproduce more calories per hectare than other grains, continued to be grown wherever farmers could get enough water to do so.

During the reign of the early Han emperors, a long period of peace and a strong, centralized government allowed irrigationworks to expand.

More and better crops were grown, and the population increased.

During the waning days of the Western Han, central control weakened and feudalarmies ranged over the land.

Then irrigation works fell into disrepair or were destroyed altogether, causing local and regional famines. During the long peace of the Han period, many cities grew in size, particularly Luoyang.

Merchants and craftsmen organized themselves into guilds, and, in fact,membership in the appropriate guild became necessary to engage in most lines of business.

The guilds fixed minimum prices and regulated wages and working hours ofguild members and their employees.

Each guild had a patron god that was enshrined in the guild hall.

The guilds also served as social protection units, and often wouldcall a strike or shop closure as a way to object to potentially restrictive laws. Under the Han, some of the natural and political barriers that had separated China from the rest of the world were overcome.

Greater commerce and territorialexpansion brought the Chinese into contact with new states and peoples.

Merchants passed from China through central Asia to the Parthian kingdom in Persia and theGreek cities on the shores of the Black Sea—even to Roman colonies on the eastern Mediterranean.

Han traders and foreign merchants crossed Yunnan and over therivers of Myanmar (formerly known as Burma), and returned with goods from as far away as India and Sri Lanka.

According to Chinese history, in 166 merchants fromDaqin (Ta Ch'in), the Chinese name for Rome, reached Luoyang and announced they had been sent by their ruler, supposedly Emperor Marcus Aurelius.

The claims maybe false, but there can be no doubt that Chinese goods, chiefly silks and furs, reached the cities of the Mediterranean via the Silk Road.

In return, the Han receivedhorses from central Asia, glass, ivory, precious stones, and fine woolens. IV RELIGION AND PHILOSOPHY A Confucianism The teachings of Confucius (Kongfuzi, 551-479 BC), became the principal school of thought during the Han dynasty.

The basis of Confucian ethics is the concept of jen, meaning “love” or “goodness.” The ideas of Confucianism can be summed up by the phrase, “Do not do to others what you do not want done to yourself.” Otherimportant Confucian virtues include righteousness, propriety, integrity, and filial piety.

Politically, Confucius advocated a government in which the ruler is benevolent andthe subjects obedient.

He believed that the monarch should cultivate moral standards in order to set a good example to the people.

Confucius was well known for hisideas on education, which he believed to be valuable for all people, regardless of class. B Buddhism The historical Buddha lived in northern India around the 5th century BC, about the same time as Confucius lived in China.

The Buddha taught that life and suffering are inseparable, that suffering is due to desire and the thirst for material things, and that the only way to escape from suffering is to be free of desire.

To be free of desireone must forget oneself and serve others, meditate, and above all live without passionate attachments to worldly things.

Then one can reach the Buddhist paradise,nirvana. Buddhism arrived in China via missionaries who followed the trade routes from India just as the Han era was beginning.

The Han Shu (Han Chronicles ) mention that, by the first century AD, Buddhist monks had established temples in Luoyang under the patronage of members of the imperial family.

But it was during the long period of disunity at the end of the Han era that Buddhism really took hold among the Chinese people.

It is not difficult to understand why.

Confucianism held that human naturewas essentially good; it emphasized the network of mutual duties and obligations between ruler and ruled, father and family, elder and younger, husband and wife.

Atthe end of Han, the law of survival seemed to have replaced Confucian relationships and Confucian theories of human goodness. 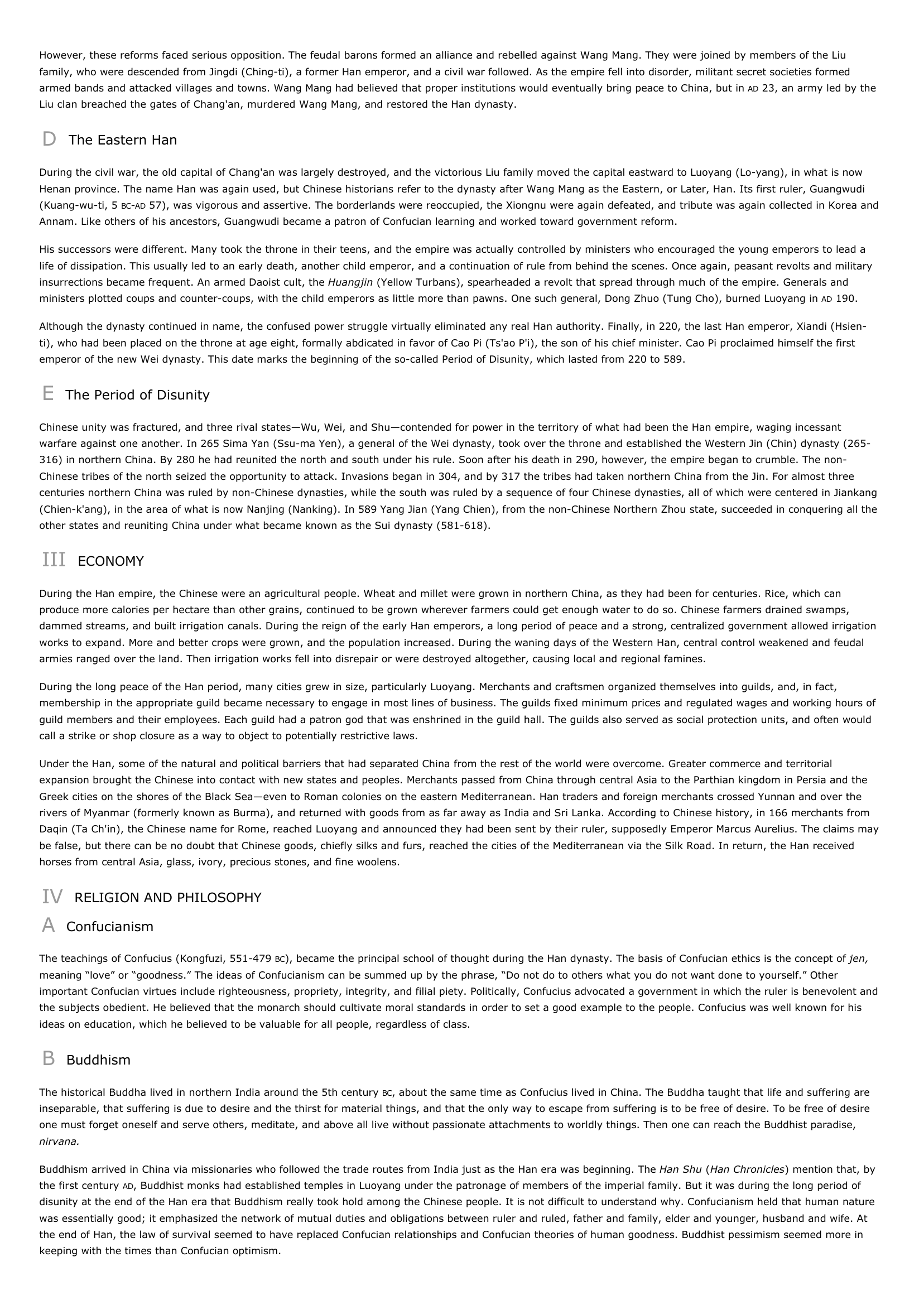