Musical I INTRODUCTION George Gershwin American pianist, songwriter, and composer George Gershwin was one of the most important figures in popular song in the 1920s and 1930s.

« C Extravaganzas Another predecessor of musical comedy, the extravaganza, evolved soon after the American Civil War (1861-1865) from traditional English pantomime.

Extravaganzaswere typically based on fairy tales and Mother Goose.

They introduced some of the elements—songs, dances, and comedy combined with spectacular stage sets andeffects—that American musical comedy later became known for. The first and most famous extravaganza show was The Black Crook (1866), often described as America’s first musical comedy.

It consisted of a five-hour series of spectacles, ballets, and elaborate stage effects with a flimsy plot to tie the whole thing together.

Beautiful women were continually on display in suggestive dancenumbers.

The Black Crook became the most successful play in the United States up to that time, running for nearly 500 performances and earning a profit of about $1 million. The earliest American show directly referred to as a musical comedy was the popular extravaganza The Brook .

The show was presented by producer Nate Salisbury in 1879.

It was also one of the earliest works on the American stage to use an integrated plot, in this instance a picnic, and to coordinate text, comedy, song, and dance.Other popular extravaganzas included Wang (1891), The Isle of Champagne (1892), The Wizard of Oz (1903), and Babes in Toyland (1903). D Operettas In the late 19th century operettas from Vienna, Austria, composed by Johann Strauss the Younger and Franz Lehár; London, by Sir Arthur Sullivan with librettos by SirWilliam S.

Gilbert; and Paris, by Jacques Offenbach were popular with American audiences.

In the years before World War I (1914-1918), several young operettacomposers emigrated from Europe to the United States.

Herbert's Naughty Marietta (1910), Friml's The Firefly (1912), and Romberg's Maytime (1917) were representative of a new genre: American operetta, with simple music and librettos and memorable songs. E Honky-Tonk and Vaudeville W.

Fields was known for his portrayal of irascible, irresponsible characters struggling to keep one stepahead of the law.

Fields began his career as a vaudeville performer before landing a role on the New York stage in 1915.He went on to make motion pictures that remain popular today.American Stock/Archive Photos An essential ingredient of today’s musical theater came from two 19th-century working-class entertainments, honky-tonk and vaudeville.

These racy “girlie” showsemerged as popular attractions in beer halls after William Valentine opened the first New York variety theater in 1840. A typical honky-tonk (or “free and easy”) performance began with a chorus line of four attractive young women in corsets and bloomers.

A song-and-dance act mightfollow, then a singing quartet or a comedian.

A dramatic sketch might come next, then perhaps a singer.

As many as 15 acts followed, sometimes stretching the showuntil dawn.

More saloon than theater, honky-tonks were an instant success and soon appeared in storefronts across the country. Vaudevilles were variety shows that developed as a counterpart of minstrel shows.

The vaudeville show emerged in the early 1870s when H.

The word vaudeville dates to the 15 th century and may relate to the French phrase voix de ville (voice of the city) or vaudevire (referring to the Valley of Vire, a French region noted for satirical folk songs).

A key figure in this transition was entrepreneur Tony Pastor, who took a cue from the tremendous success of P.

T.Barnum and his popular shows featuring giants, midgets, bearded ladies, armless wonders, and other bizarre characters. Vaudeville shows became the dominant form of entertainment in the United States by the early 20th century.

Popular vaudeville acts included an array of greatcomedians, such as Will Rogers, W.C.

Fields, Milton Berle, Fred Allen, Jack Benny, and George Burns and Gracie Allen; female singers such as Nora Bayes, Anna Held,Sophie Tucker, and Eva Tanguay; madcap acts such as the Marx Brothers; magicians like Harry Houdini; dancers such as Fred Astaire and Vernon Castle; and anendless variety of novelty acts such as Swain’s Cats and Rats, where rats raced around a track astride cats.

The frenetic spirit and music of vaudeville shows stronglyinfluenced modern musical theater. III THE MODERN MUSICAL As if by grand design—out of an improbable mix of the comic operas of Gilbert and Sullivan, low-down honky-tonks, minstrel shows, extravaganzas, operettas, therambunctious clowning of burlesques, and the song and dance of vaudeville shows—there emerged in the early 20th century a new kind of theater: the musicalcomedy. IV 1900 TO WORLD WAR II A Cohan, Kern, and Wodehouse. » 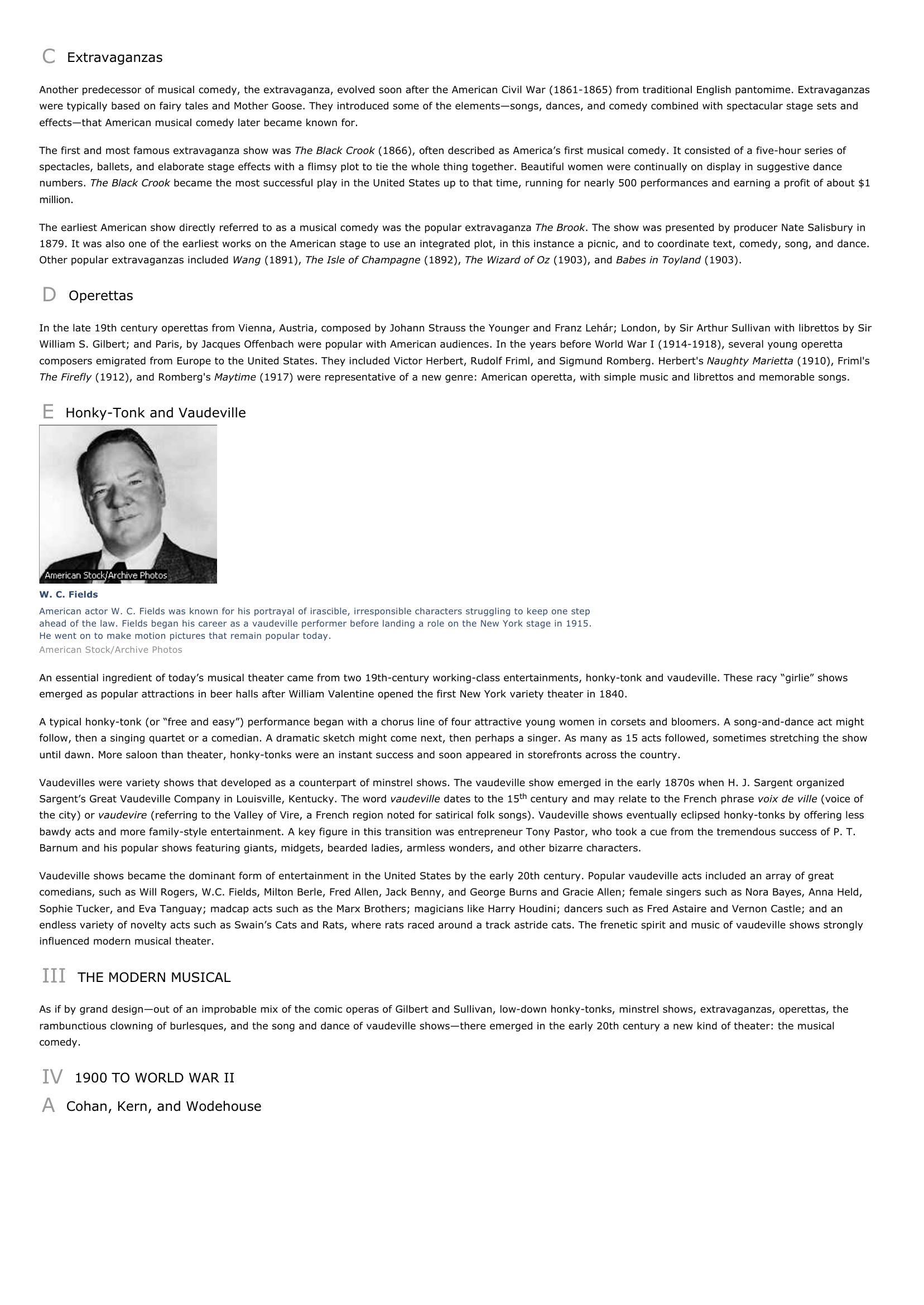