« B1 Vacuoles Vacuoles are membrane-bound cavities filled with cell sap, which is made up mostly of water containing various dissolved sugars, salts, and other chemicals. B2 Plastids Plastids are types of organelles, structures that carry out specialized functions in the cell.

Chloroplasts contain chlorophyllsand carotenoid pigments; they are the site of photosynthesis, the process in which light energy from the sun is fixed as chemical energy in the bonds of various carboncompounds.

Leucoplasts, which contain no pigments, are involved in the synthesis of starch, oils, and proteins.

Chromoplasts manufacture carotenoids. B3 Mitochondria Whereas plastids are involved in various ways in storing energy, another class of organelles, the mitochondria, are the sites of cellular respiration.

This process involvesthe transfer of chemical energy from carbon-containing compounds to adenosine triphosphate, or ATP, the chief energy source for cells.

The transfer takes place inthree stages: glycolysis (in which acids are produced from carbohydrates); the Krebs cycle, also called the citric acid cycle; and electron transfer.

Like plastids,mitochondria are bounded by two membranes, of which the inner one is extensively folded; the folds serve as the surfaces on which the respiratory reactions takeplace. B4 Ribosomes, Golgi Apparatus, and Endoplasmic Reticulum Two other important cellular contents are the ribosomes, the sites at which amino acids are linked together to form proteins, and the Golgi apparatus, which plays a rolein the secretion of materials from cells.

In addition, a complex membrane system called the endoplasmic reticulum runs through much of the cytoplasm and appears tofunction as a communication system; various kinds of cellular substances are channeled through it from place to place.

Ribosomes are often connected to theendoplasmic reticulum, which is continuous with the double membrane surrounding the nucleus of the cell. B5 Nucleus The nucleus controls the ongoing functions of the cell by specifying which proteins are produced.

It also stores and passes on genetic information to future generationsof cells during cell division.

See Cell. V TISSUE SYSTEMS There are many variants of the generalized plant cell and its parts.

Similar kinds of cells are organized into structural and functional units, or tissues, which make up theplant as a whole, and new cells (and tissues) are formed at growing points of actively dividing cells.

Three tissue systems are recognized in vascular plants: dermal, vascular, and ground (or fundamental). A Dermal System The dermal system consists of the epidermis, or outermost layer, of the plant body.

It forms the skin of the plant, covering the leaves, flowers, roots, fruits, and seeds.Epidermal cells vary greatly in function and structure. The epidermis may contain stomata, openings through which gases are exchanged with the atmosphere.

These openings are surrounded by specialized cells calledguard cells, which, through changes in their size and shape, alter the size of the stomatal openings and thus regulate the gas exchange.

The epidermis is covered with awaxy coating called the cuticle, which functions as a waterproofing layer and thus reduces water loss from the plant surface through evaporation.

If the plant undergoessecondary growth—growth that increases the diameter of roots and stems through the activity of lateral meristems—the epidermis is replaced by a peridermis made upof heavily waterproofed cells (mainly cork tissue) that are dead at maturity. B Vascular System The vascular tissue system consists of two kinds of conducting tissues: the xylem, responsible for conduction of water and dissolved mineral nutrients, and the phloem,responsible for conduction of food.

The xylem also stores food and helps support the plant. B1 Xylem The xylem consists of two types of conducting cells: tracheids and vessels.

Elongated cells, with tapered ends and secondary walls, both types lack cytoplasm and aredead at maturity.

The walls have pits—areas in which secondary thickening does not occur—through which water moves from cell to cell.

Vessels usually are shorter andbroader than tracheids, and in addition to pits they have perforation—areas of the cell wall that lack both primary and secondary thickenings and through which waterand dissolved nutrients may freely pass. B2 Phloem The phloem, or food-conducting tissue, consists of cells that are living at maturity.

The principal cells of phloem, the sieve elements, are so called because of the clustersof pores in their walls through which the protoplasts of adjoining cells are connected.

Two types of sieve elements occur: sieve cells, with narrow pores in rather uniformclusters on the cell walls, and sieve-tube members, with larger pores on some walls of the cell than on others.

Although the sieve elements contain cytoplasm atmaturity, the nucleus and other organelles are lacking.

Associated with the sieve elements are companion cells that do contain nuclei and that are responsible formanufacturing and secreting substances into the sieve elements and removing waste products from them. C Ground System The ground, or fundamental, tissue systems of plants consist of three types of tissue.

The first, called parenchyma, is found throughout the plant and is living andcapable of cell division at maturity.

Usually only primary walls are present, and these are uniformly thickened.

The cells of parenchyma tissue carry out many specialized. » 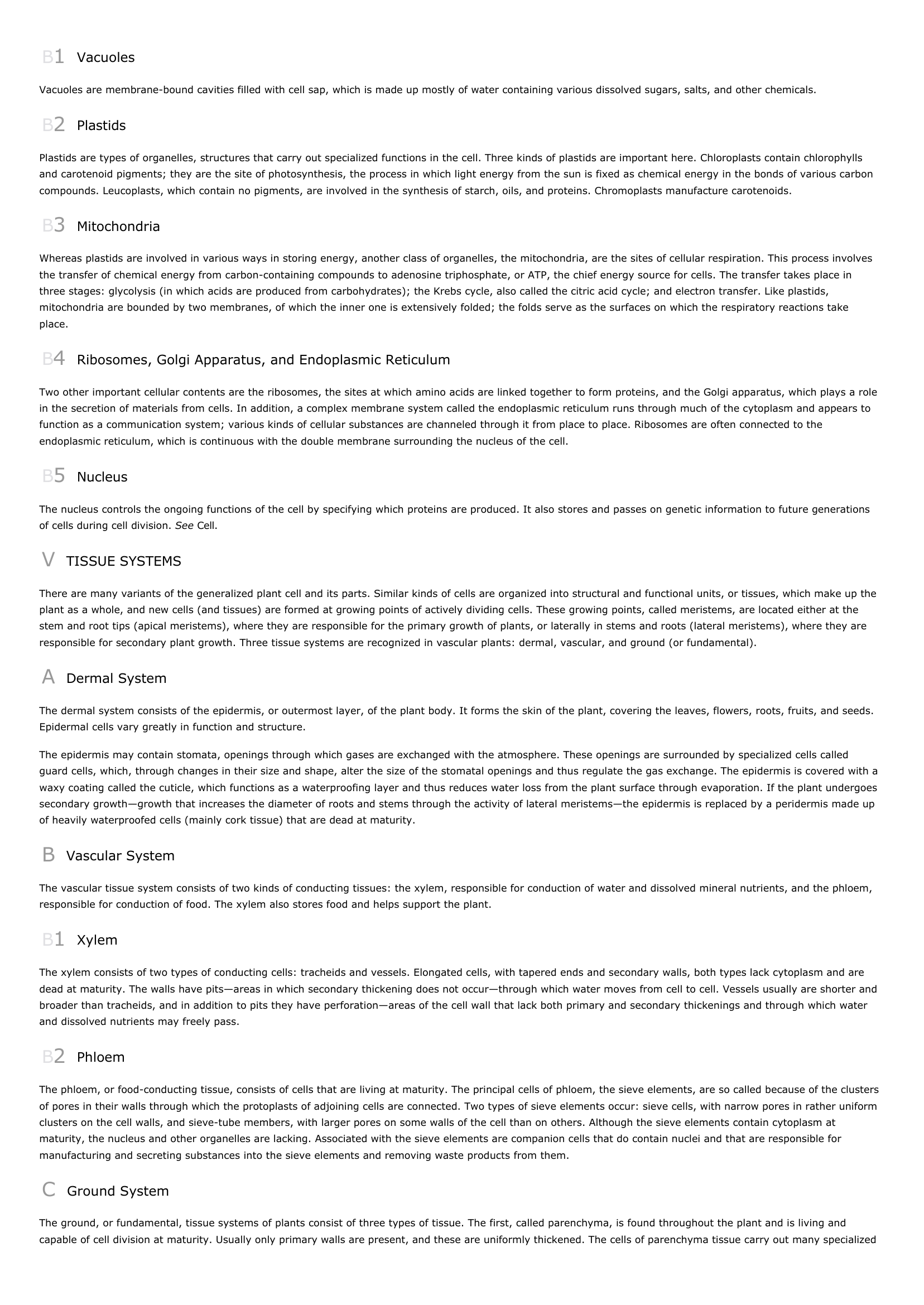