The Germans launched thousands of V-2s carrying explosives against targets in Britain and The Netherlands.

Whilethey did not prove to be an effective weapon, V-2s did become the first human-made objects to reach altitudes above 80 km (50 mi)—the height at which outer spaceis considered to begin—before falling back to Earth.

The V-2 inaugurated the era of modern rocketry. A2 Early Artificial Satellites During the years following World War II, the United States and the Union of Soviet Socialist Republics (USSR) engaged in efforts to construct intercontinental ballisticmissiles (ICBMs) capable of traveling thousands of miles armed with a nuclear warhead.

In August 1957 Soviet engineers, led by rocket pioneer Sergey Korolyev, werethe first to succeed with the launch of their R-7 rocket, which stood almost 30 m (100 ft) tall and produced 3.8 million newtons (880,000 lb) of thrust at liftoff.

Althoughits primary purpose was for use as a weapon, Korolyev and his team adapted the R-7 into a satellite launcher.

Although it was only a simple 58-cm (23-in) aluminum sphere containing a pair of radio transmitters, Sputnik’ssuccessful orbits around Earth marked a huge step in technology and ushered in the space age.

On November 3, 1957, the Soviets launched Sputnik 2, which weighed508 kg (1,121 lb) and contained the first space traveler—a dog named Laika, which survived for a few hours aboard Sputnik 2.

Laika died from rising temperatureswithin the satellite before her air supply ran out. News of the first Sputnik intensified efforts to launch a satellite in the United States.

Success came on January 31, 1958, with the launch of the satellite Explorer 1.

Instruments aboardExplorer 1 made the first detection of the Van Allen belts, which are bands of trapped radiation surrounding Earth ( see Radiation Belts).

This launch also represented a success for Wernher von Braun, who had been brought to the United States with many of his engineers after World War II.

Von Braun’s team had created the Jupiter C(an upgraded version of their Redstone missile), which launched Explorer 1. The satellites that followed Sputnik and Explorer into Earth orbit provided scientists and engineers with a variety of new knowledge.

For example, scientists who trackedradio signals from the U.S.

satellite Vanguard 1, launched in March 1958, determined that Earth is slightly flattened at the poles.

Even as these satellites revealed new details about our own planet, efforts were underway to reach our nearest neighbor in space,the Moon. B Unpiloted Lunar Missions Early in 1958 the United States and the USSR were both working hard to be the first to send a satellite to the Moon.

Initial attempts by both sides failed.

On October11, 1958, the United States launched Pioneer 1 on a mission to orbit the Moon.

It did, however, discover a second VanAllen belt of radiation surrounding Earth. On January 2, 1959, after two earlier failed missions, the USSR launched Luna 1, which was intended to hit the Moon.

Although it missed its target, Luna 1 did becomethe first artificial object to escape Earth orbit.

On September 14, 1959, Luna 2 became the first artificial object to strike the Moon, impacting east of the MareSerentitatis (Sea of Serenity).

In October 1959 Luna 3 flew around the Moon and radioed the first pictures of the far side of the Moon, which is not visible from Earth. In the United States, efforts to reach the Moon did not resume until 1962, with a series of probes called Ranger.

The early Rangers were designed to eject aninstrument capsule onto the Moon’s surface just before the main spacecraft crashed into the Moon.

These missions were plagued by failures—only Ranger 4 struck theMoon, and the spacecraft had already ceased functioning by that time.

Rangers 6 through 9 were similar to the early Rangers, but did not have instrument packages.They carried television cameras designed to send back pictures of the Moon before the spacecraft crashed.

On July 31, 1964, Ranger 7 succeeded in sending back thefirst high-resolution images of the Moon before crashing, as planned, into the surface.

Rangers 8 and 9 repeated the feat in 1965. By then, the United States had embarked on the Apollo program to land humans on the Moon (see the Piloted Spaceflight section of this article for a discussion of the Apollo program).

With an Apollo landing in mind, the next series of U.S.

lunar probes, named Surveyor, was designed to “soft-land” (that is, land without crashing) onthe lunar surface and send back pictures and other data to aid Apollo planners.

As it turned out, the Soviets made their own soft landing first, with Luna 9, on February3, 1966.

Luna 9 radioed the first pictures of a dusty moonscape from the lunar surface.

Six moreSurveyor missions followed; all but two were successful.

The Surveyors sent back thousands of pictures of the lunar surface.

Two of the probes were equipped with amechanical claw, remotely operated from Earth, which enabled scientists to investigate the consistency of the lunar soil. At the same time, the United States launched the Lunar Orbiter probes, which began circling the Moon to map its surface in unprecedented detail.

Four more Lunar Orbiters continued the mapping program, which gave scientists thousands of high-resolution photographscovering nearly all of the Moon. Beginning in 1968 the USSR sent a series of unpiloted Zond probes—actually a lunar version of their piloted Soyuz spacecraft—around the Moon.

These flights, initiallydesigned as preparation for planned piloted missions that would orbit the Moon, returned high-quality photographs of the Moon and Earth.

Two of the Zonds carriedbiological payloads with turtles, plants, and other living things. Although both the United States and the USSR were achieving successes with their unpiloted lunar missions, the Americans were pulling steadily ahead in their pilotedprogram.

As their piloted lunar program began to lag, the Soviets made plans for robotic landers that would gather a sample of lunar soil and carry it to Earth.

Althoughthis did not occur in time to upstage the Apollo landings as the Soviets had hoped, Luna 16 did carry out a sample return in September 1970, returning to Earth with100 g (4 oz) of rock and soil from the Moon’s Mare Fecunditatis (Sea of Fertility).

In November 1970 Luna 17 landed with a remote-controlled rover called Lunakhod 1.The first wheeled vehicle on the Moon, Lunakhod 1 traveled 10.5 km (6.4 mi) across the Sinus Iridium (Bay of Rainbows) during ten months of operations, sending backpictures and other data.

Lunakhod 2, carried aboard the Luna 21 lander, reachedthe Moon in January 1973.

Then, in August 1976 Luna 24 ended the first era of lunar exploration. Exploration of the Moon resumed in February 1994 with the U.S.

probe called Clementine, which circled the Moon for three months.

Clementine’s laser altimeter bounced laserbeams off of the Moon’s surface, measuring the time they took to come back to determine the height of features on the Moon. In January 1998 NASA’s Lunar Prospector probe began circling the Moon in an orbit over the Moon’s north and south poles.

Its sensors conducted a survey of theMoon’s composition.

In March 1998 the spacecraft found tentative evidence of water in the form of ice mixed with lunar soil at the Moon’s poles.

Controllers intentionally crashed the probe into the Moon in July 1999, hoping to see signs of water in theplume of debris raised by the impact.

Measurements taken by instruments around Earth, however, did not find evidence of water after the crash, nor did they rule outthe existence of water.. » 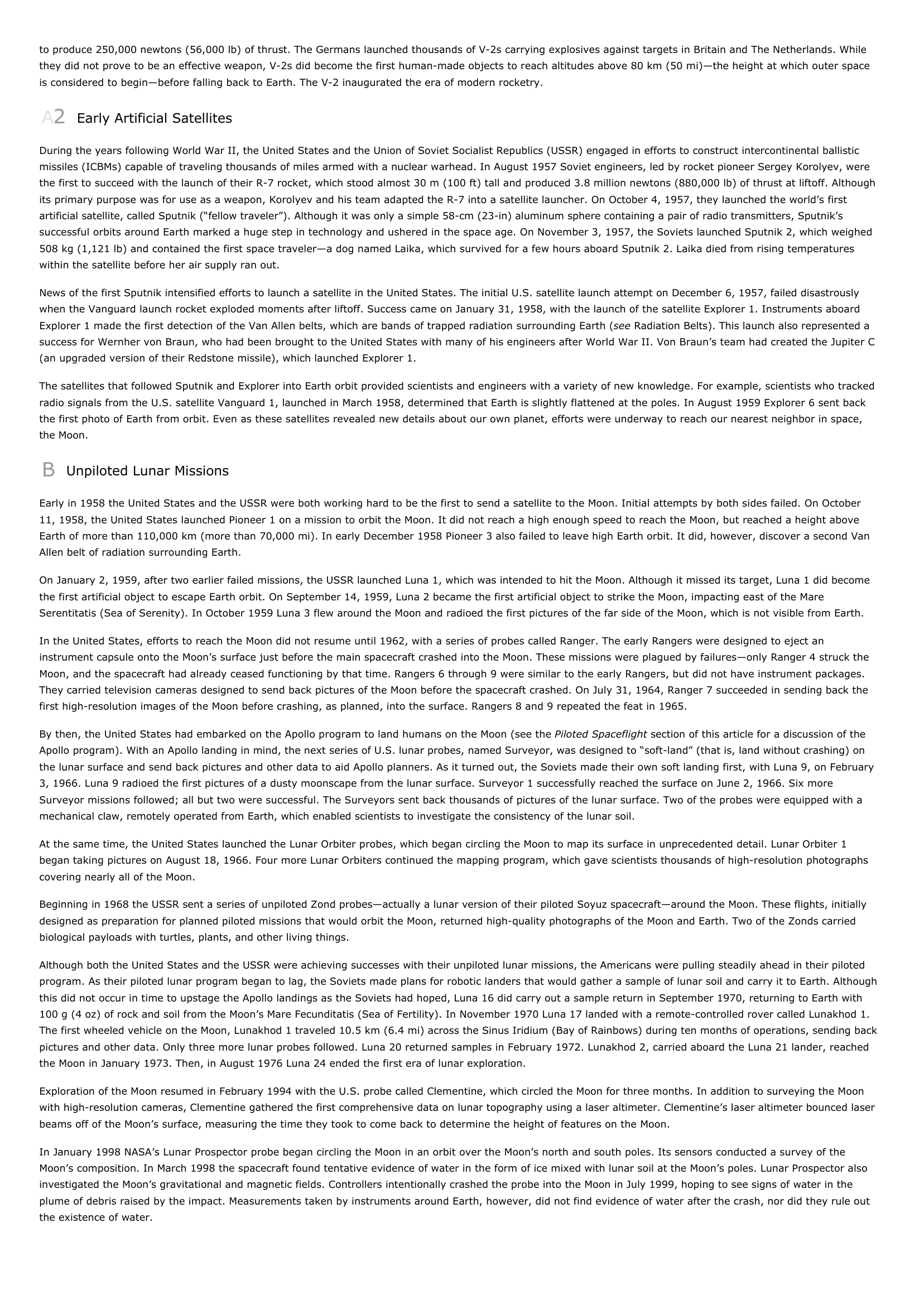