« A charge-coupled device (CCD) can be much smaller than a camera tube and is much more durable.

As a result, cameras with CCDs are more compact and portablethan those using a camera tube.

The image they create is less vulnerable to distortion and is therefore clearer.

In a CCD, the light from a scene strikes an array ofphotodiodes arranged on a silicon chip.

Photodiodes are devices that conduct electricity when they are struck by light; they send this electricity to tiny capacitors.

Thecapacitors store the electrical charge, with the amount of charge stored depending on the strength of the light that struck the photodiode.

The CCD converts theincoming light from the scene into an electrical signal by releasing the charges from the photodiodes in an order that follows the scanning pattern that the receiver willfollow in re-creating the image. C Encoder In color television, the signals from the three camera tubes or charge-coupled devices are first amplified, then sent to the encoder before leaving the camera.

Theencoder combines the three signals into a single electronic signal that contains the brightness information of the colors (luminance).

It then adds another signal thatcontains the code used to combine the colors (color burst), and the synchronization information used to direct the television receiver to follow the same scanningpattern as the camera.

The television camerarecords an image, such as a scene in a television show, by breaking it up into a series of lines and scanning over each line with the beam or beams of electronscontained in the camera tube.

The pattern is created in a CCD camera by the array of photodiodes.

One scan of an image produces one static picture, like a singleframe in a film.

The camera must scan a scene many times per second to record a continuous image.

In the television receiver, another electron beam—or set ofelectron beams, in the case of color television—uses the signals recorded by the camera to reproduce the original image on the receiver's screen.

Just like the beam orbeams in the camera, the electron beam in the receiver must scan the screen many times per second to reproduce a continuous image. In order for television to work, television images must be scanned and recorded in the same manner as television receivers reproduce them.

In the United States,broadcasters and television manufacturers have agreed on a standard of breaking images down into 525 horizontal lines, and scanning images 30 times per second.

InEurope, most of Asia, and Australia, images are broken down into 625 lines, and they are scanned 25 times per second.

Special equipment can be used to maketelevision images that have been recorded in one standard fit a television system that uses a different standard.

Telecine equipment (from the words television andcinema) is used to convert film and slide images to television signals.

The images from film projectors or slides are directed by a system of mirrors toward the telecinecamera, which records the images as video signals. The scanning method that is most commonly used for analog television is called interlaced scanning.

It produces a clear picture that does not fade.

When an image isscanned line by line from top to bottom, the top of the image on the screen will begin to fade by the time the electron beam reaches the bottom of the screen.

The image is produced 60 times a second, with odd and even fields scanned every 0.6seconds.

The higher scan rate can produce a better picture than analog. V TRANSMISSION OF TELEVISION SIGNALS The audio and video signals of a television program are broadcast through the air by a transmitter.

The transmitter superimposes the information in the camera'selectronic signals onto carrier waves.

The transmitter amplifies the carrier waves, making them much stronger, and sends them to a transmitting antenna.

Thistransmitting antenna radiates the carrier waves in all directions, and the waves travel through the air to antennas connected to television sets or relay stations. A The Transmitter The transmitter superimposes the information from the electronic television signal onto carrier waves by modulating (varying) either the wave's amplitude, whichcorresponds to the wave's strength, or the wave's frequency, which corresponds to the number of times the wave oscillates each second ( see Radio: Modulation).

These waves are combined to produce a carrier wave that contains both the video and audio information.

The transmitter firstgenerates and modulates the wave at a low power of several watts.

After modulation, the transmitter amplifies the carrier signal to the desired power level, sometimesmany kilowatts (1 kilowatt equals 1,000 watts), depending on how far the signal needs to travel, and then sends the carrier wave to the transmitting antenna. The frequency of carrier waves is measured in hertz (Hz), which is equal to the number of wave peaks that pass by a point every second.

The frequency of themodulated carrier wave varies, covering a range, or band, of about 4 million hertz, or 4 megahertz (4 MHz).

This band is much wider than the band needed for radiobroadcasting, which is about 10,000 Hz, or 10 kilohertz (10 kHz).

Television stations that broadcast in the same area send out carrier waves on different bands offrequencies, each called a channel, so that the signals from different stations do not mix.

To accommodate all the channels, which are spaced at least 6 MHz apart,television carrier frequencies are very high.

Six MHz does not represent a significant chunk of bandwidth if the television stations broadcast between 50 and 800 MHz. In the United States and Canada, there are two ranges of frequency bands that cover 67 different channels.

These frequencies correspond to channels 2 through 13 on a television set.

Thesecond range, ultrahigh frequency (UHF), includes frequencies from 407 MHz to 806 MHz, and it corresponds to channels 14 through 69.

However, channel 37 is usedfor radio astronomy and medical telemetry equipment, not for television broadcasting ( see Radio and Television Broadcasting).

When the transition to all-digital television broadcasting is complete, channels 52 through 69 will no longer be used for television signals.

These frequencies may become available for other uses such aswireless communication. The high-frequency waves radiated by transmitting antennas can travel only in a straight line, and may be blocked by obstacles in between the transmitting andreceiving antennas.

For this reason, transmitting antennas must be placed on tall buildings or towers.

In practice, these transmitters have a range of about 120 km (75mi).

In addition to being blocked, some television signals may reflect off buildings or hills and reach a receiving antenna a little later than the signals that travel directlyto the antenna.

The result is a ghost, or second image, that appears on the television screen.

Digital transmission, however, eliminates ghosts and snow since thepicture that results is recreated from a digital code, not from analog waves.

Television signals may also be sent clearly from almost any point on Earth to any other—andfrom spacecraft to Earth—by means of cables, microwave relay stations, and communications satellites. B Cable Transmission. » 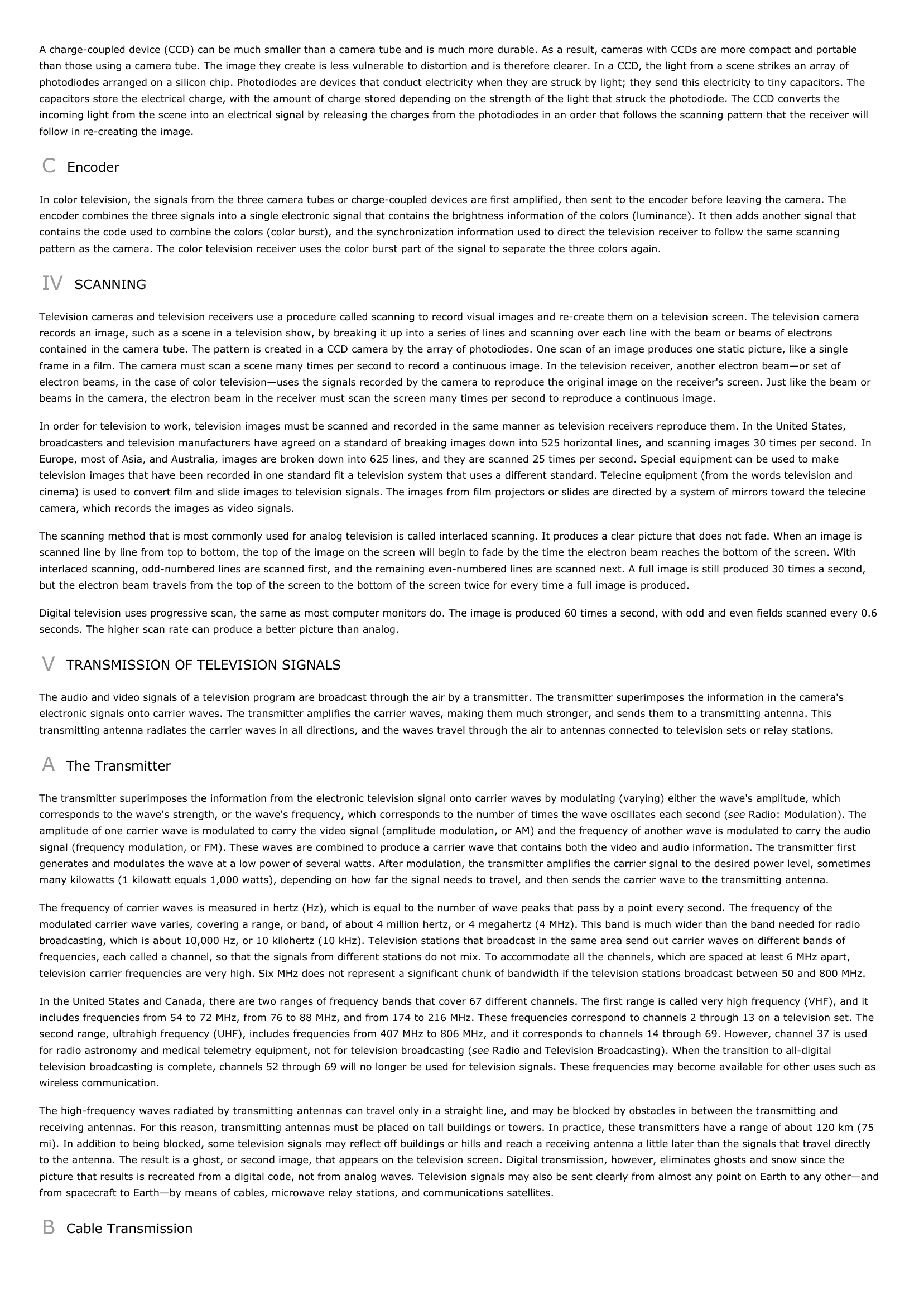