The surrounding area was planted with trees and flowers during Hatshepsut’sreign and for many years after.Gian Berto Vanni/Art Resource, NY In ancient Egypt, temples were grandiose, built of huge blocks and columns of stone.

Often they were enlarged by successive rulers to form strung-out series of templeparts, as in the gigantic Temple of Amon (circa 1550-1070 BC) at Al Karnak.

The Nile cliffs were used as settings for temples, such as the massive mortuary temple(15th century BC) of Hatshepsut at Dayr al Baḩrī, the superhuman scale of which still inspires awe.

A profusion of sculpture (both in the round and in incised relief) andpainting told of the gods and their special connection with Egypt's rulers.

In the Middle East the hill form called the ziggurat predominated for a long time; this was ahuge stylized constructed mound, sometimes encircled by a walkway.

The best preserved is the ziggurat of Nanna at Ur (about 2100 BC) in present-day Iraq.

The design of the temple was known as dipteral,a term that refers to the two sets of columns surrounding the interior section.

These columns surrounded a small chamberthat housed the statue of Apollo.

With Ionic columns reaching 19.5 m (64 ft) high, these ruins suggest the formergrandeur of the ancient temple.Bernard Cox/Bridgeman Art Library, London/New York Beginning about the 7th century BC, the Greeks created the temple with columns around all sides that support a plain, pitched roof—the image that comes most readily to the Western mind when the word temple is mentioned.

This form, perfected in the Parthenon (circa 447-432 BC) on the Athenian Acropolis, has had a long life in the history of art.

Often atop a city hill (acropolis) and built of fine-grained marble, the Greek temple is justly famous for its fine proportions and elegant clarity of form.

Itsits on a three-stepped stone platform upon which the columns and the walls of the cella are set; the gable ends of the roof, and other parts, were embellished withsculpture.

As time passed, the kinds of columns ( see Column) used by the Greeks—Doric, Ionic, and Corinthian—became the touchstones of classically inspired buildings everywhere. V ROMAN TEMPLES The Roman temple (4th century BC-3rd century AD) at first seems to be almost entirely derived from the Greek.

Unlike the Greek examples, however, it is emphatically emphasized on one end with a high staircase set between two projecting wall sections that form part of the high platform, or podium, on which it is built.

Every Romantown had one or more temples of this kind, placed not upon an acropolis but amid the urban fabric; its elevation on its podium helped give it distinction.

The number ofpublic buildings, both secular and religious, that descend from the centered, one-ended Roman temple, with its lofty porch, is beyond count.

A well-preserved example,the famous Maison-Carrée (four-square house), in Nîmes in southern France, has been a major architectural source; for example, Thomas Jefferson's design for theState Capitol at Richmond, Virginia, was based on it.

The forms of Greek and Roman temples are among the most influential of all Western architectural creations, notonly because of their historical associations but also because of their solid symmetry and stable composition.

They have stood, for centuries in the West, as architecturalmetaphors of civilization itself. VI INDIAN TEMPLES Model of Borobudur Temple, JavaA model of Borobudur, a Hindu-Buddhist temple on the island of Java in Indonesia, reveals in this aerial view the eight. » 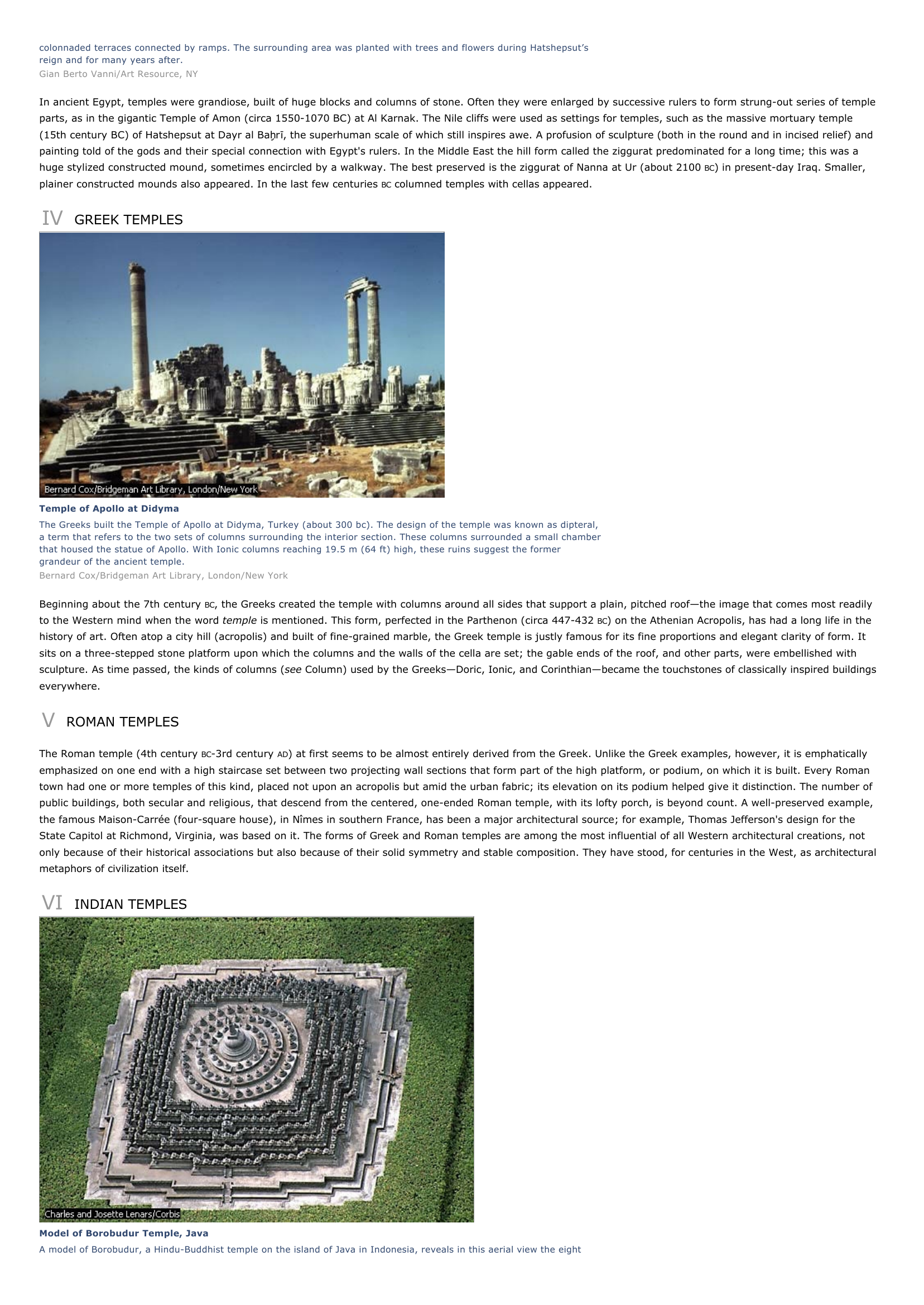