Athletes win running races by completing the distance or course in the leastamount of time. A Sprints The shortest running events, called sprints or dashes, are the premier events at a track-and-field meet.

Past champions include Jesse Owens, WilmaRudolph, Evelyn Ashford, Carl Lewis, Florence Griffith Joyner, and Michael Johnson of the United States; Harold Abrahams and Linford Christie of the United Kingdom;and Donovan Bailey of Canada. In running the sprints, the athlete crouches at the starting line, leaps into full stride when the official fires the starter's pistol, and races to the finish line at top speed.Sprinters gain traction and power in the start by placing their feet against metal or plastic starting blocks located behind the starting line.

The athletes who are fastest coming out of the starting blocks have the advantage.

The chief characteristics of an efficient sprinting style are high knee lift, free-swinging arm movements, and aforward lean of about 25 degrees. Endurance is a major factor in the 400-meter race, because the athlete must maintain a sprint for such a long distance.

It is rare for a runner to have both the purespeed and the stamina to compete in both the 100-meter and 400-meter events. B Middle Distances Races ranging from 600 meters to 3,000 meters are known as middle-distance events.

The mile run is also a popular event.

It is the only nonmetric distance still officially recognized.

Outstanding middle-distance performers over the years haveincluded Paavo Nurmi of Finland; Roger Bannister of Britain, who was the first to break the 4-minute barrier in the mile; Jim Ryun of the United States; Sebastian Coe ofthe United Kingdom; and Noureddine Morceli of Algeria. Middle-distance runners use a combination of sprint speed and endurance.

They must stay in contention but also regulate their speed carefully to avoid tiring tooquickly.

Some middle-distance runners change speed several times during a race, while others maintain an even pace throughout.

Nurmi, who dominated track and fieldin the 1920s, carried a stopwatch during races as a means of checking on his pace.

An important element of middle-distance races is the kick, a sprint for the finish line on the last lap.

Running form for middle-distance events differs from that employed in the sprints.

Star long-distance runners have included Ingrid Kristiansen and GreteWaitz of Norway, Emil Zátopek of the former Czechoslovakia, Frank Shorter of the United States, and Haile Gebrselassie of Ethiopia. Many of the best distance runners are small and light-framed.

They use a running style that avoids excess motion.

Knee action is slight, arm movements are reduced toa minimum, and the strides are shorter than those used in sprinting or middle-distance running.

The top racers use a variety of techniques to outperform their opponents, from abrupt changes of pace during the race to fast finishingkicks. Although cross-country races are not generally held during track-and-field meets, many distance runners compete at cross country during the fall and winter.

Cross-country races take place over rough, rolling terrain and can be as long as 14.5 km (9 mi).

Because of the varying conditions and sites, no world records are kept forcross-country racing. D Relay Races The relays are the only true team events in track and field.

Relays are split into four sections called legs, with one runner covering each, then passing a baton to thenext runner.

Shuttle hurdlesinvolve teams of four hurdlers, two at each end of the track, who race back and forth. E Hurdles Hurdling events are dashes in which competitors must clear a series of ten barriers called hurdles , which are made of metal and wood (or metal and plastic).

The hurdles are placed at equal distances over the course.

The key to success in the hurdles is sprinting smoothly while skimming just over the hurdles.

It is grounds for disqualification if an athlete goesaround the hurdle instead of over it, or if an athlete purposely knocks down hurdles.

Instead, most states contest the 300-m hurdles, with the boys leaping 91-cm hurdles and the girls 76-cmones. 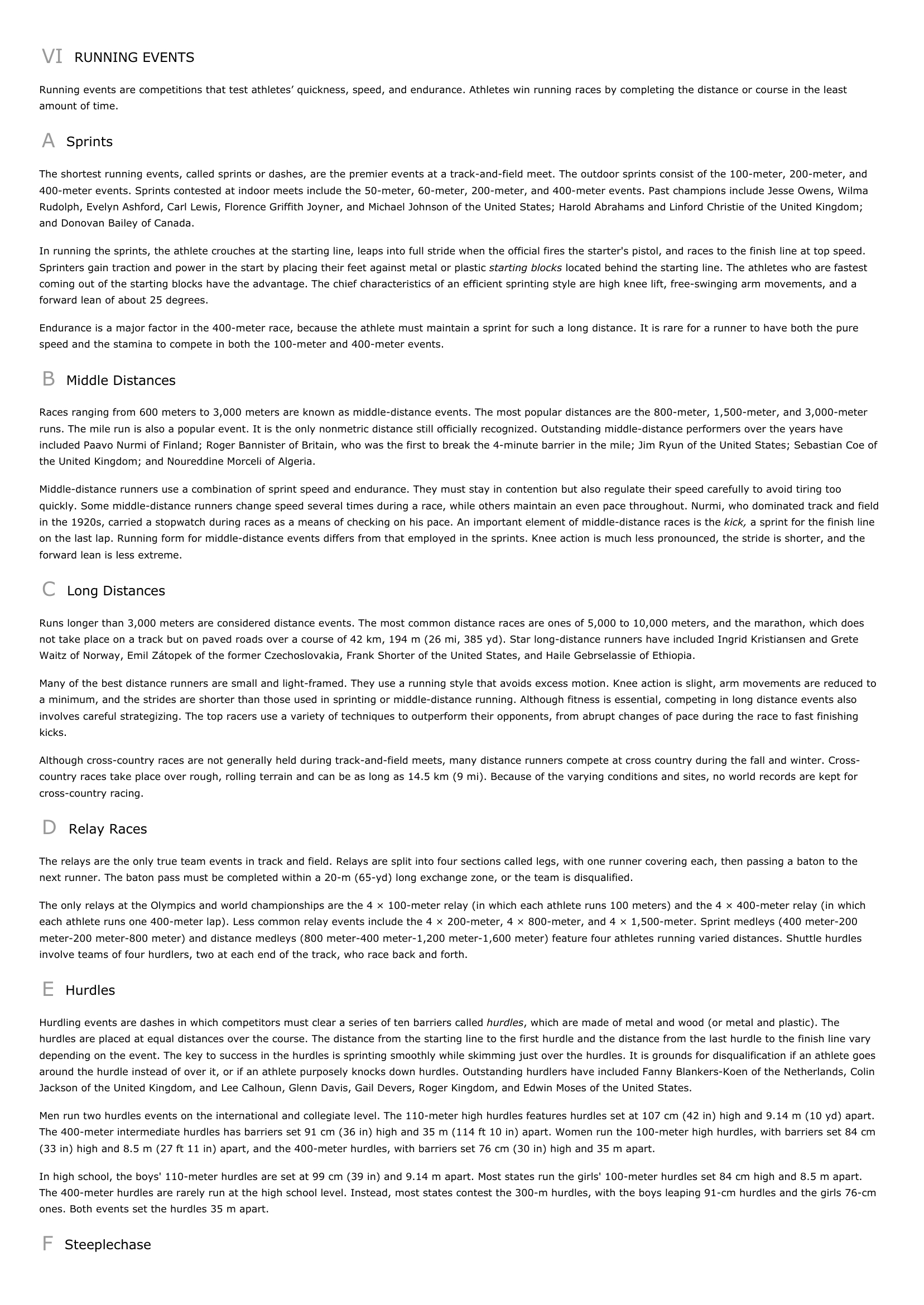