In Toni Morrison's The Bluest Eye and F.Scott Fitzgerald's The Great Gatsby, the central characters resort to self-delusion in their attempt to escape from unpleasant realities: while Pecola rejects her black essence and enters an imaginary world, blinded by the White ideal, in order to feel integrated into the White society, Gatsby devotes his whole time to a dream in which he over-idealizes his past and his extinguished relationship with a careless woman called Daisy, aiming to restructure the past. Their behavior has consequences, it will lead them both to tragic endings: Pecola's delusional mind isolates her even more from the real world and lead her to live a life in total isolation, on the fringes of society, grazing the edge of madness and Gatsby's willingness to rub a superficial, dazzled and careless society will lead him to his own death.

Consequently, after this scene and the car accident she was implicated in, she withdrawswith Tom in her materialistic world, forgetting for ever Gatsby without any remorse.

However, Gatsby still believesthat she will call him again, he is pathetic and in total delusion, he cannot accept that his dream as faded awayand that he totally overestimated Daisy and her love for him. Finally, in the very end, Gatsby's incorruptible faith in his dream leads him to protect Daisy from the car accidentscandal she caused after all she did, and consequently to a tragic ending: his death. After the argument in the suite at the Plaza Hotel, Daisy was extremely dangerous because she had withdrawedin herself, generating a car accident and the death of Myrtle Wilson who had been locked by her husband Georgesince she wanted to leave him and after an argument with him she rushed out and died because of Daisy.

Readyto assume that he was driving to cover Daisy and Tom Buchanan suggesting George that Gatsby was driving thatnight and killed his wife, George goes to Gatsby's mansion and shoots him and himself.

Gatsby's death show thathis deluded dream led him to his death, he decided to do everything for Daisy even if she doesn't marry him as hewanted to.

The consequences are enormous for him: while Daisy and Tom withdrawed, escaping from this scandalas “ a rotten crowd” according to Nick who understood their real nature, Gatsby is involved in this affair and endsalone and soiled: indeed, no one comes to his funeral except Nick and Gatsby's father because everyone deserts,being afraid of being involved in this scandal.

Even after his death Gatsby's memory is still soiled, he is reduced tothe object of gossip: a taxi driver stops for a minute in front of his house as if it was a show. Not only does Gatsby try to resort to self-delusion in order to escape from the failure of his dream: Pecola in The Bluest Eye also does.

Indeed, she aims to get blue eyes and finally believes in it though this is totally impossible in order to be protected from the cruelties she underwent everyday. By absorbing the white standard of beauty which denies her values, Pecola ignores and rejects who she really islike Gatsby.

Her only desire in life thus becomes to have the bluest eyes, a dream that such as Gatsby's one istotally deluded. In The Bluest Eye, internalized white standards of beauty tend to deform black girls and women's lives.

Indeed, in this community, messages conveying that whiteness is superior are everywhere: the white baby doll given toClaudia, the idealization of Sherley Temple or white beautiful women in the movies like Jean Harlow or BettyGrable, the idea that light-skinned Maureen Peel is cuter than the other black girls and adored by everyone or thefact that Pauline Breedlove prefers the little white girl she works for than her own daughter Pecola.

Thus, thepervasive white standard of beauty is adopted by many characters of the novel, including Pecola, who isobsessed by having blue eyes because she believes that this conventional mark of white beauty will change theway she will be seen but also the way she will see things , forgetting her identity and ignoring her black essence.Nevertheless, she believes these blue eyes will fulfill her dream or perfection, but it is not fulfilled at all since theyonly drive Pecola to sterility and emptiness, having abandoned her essence: this I what Claudia calls the “evil offulfillment”.

However this is also the case of her mother Pauline, deluding herself by orchestrating a substitute lifeas the Fishers' “ideal servant” to pretend access to the white community, forgetting the fact that she abandonsher daughter and her identity for this illusion.

This is also the case of Geraldine who denies her black funk, shehas internalized the white standards of beauty to escape from her daily reality but instead she became unable tofeel any affection, even for her son Junior, and violent as showed in the scene where she insults Pecola withoutany valid reason. Furthermore, all the cruel realities Pecola has to undergo everyday drive her to be even more obsessed by herdesire to integrate the upper class of the codified class system in the Lorain community based on colour, leadingher to a state of madness and a pervasive isolation. Indeed, Pecola is exhausted by the hardness of her life: her father raped her, her mother beat her for this anddoes not express her feelings with her, Geraldine, Maureen Peel, the black boys, the teachers treated her meanly,Louis Junior traumatized her, and Mr Jacobowski rejected her in the shop.

Mutilated, Pecola thus strengthen herdream to soothe her pain: indeed, in the shop, when Mr Jacobowski refuses to touch Pecola's hand, she swallowsmore Mary Jane candies representing the white ideal as if they were “nine orgasms” in order to absorb more andmore the white ideal.

However, though Soaphead Church grants Pecola her wish for blue eyes, her dream is atotal failure, but, deluded, Pecola does not see this, she is still rejected by the society, having to live on thefringes of society, she reaches a certain state of madness, speaking with her imaginary friend of her actual fear:now that she has blue eyes, can someone have prettier and bluer eyes than her? Pecola has been consequentlydestroyed by her self-delusion, she depended too much on the white ideal to identify herself, and is now deeplyconvinced of her ugliness. Finally, Pecola's passive behavior, never confronting reality makes her retreat further and further into her ownimaginary world.

Feeling isolated and rejected, she reaches the conclusion that she is the cause of her problems.Her self-delusion then leads her to self-hatred.. » 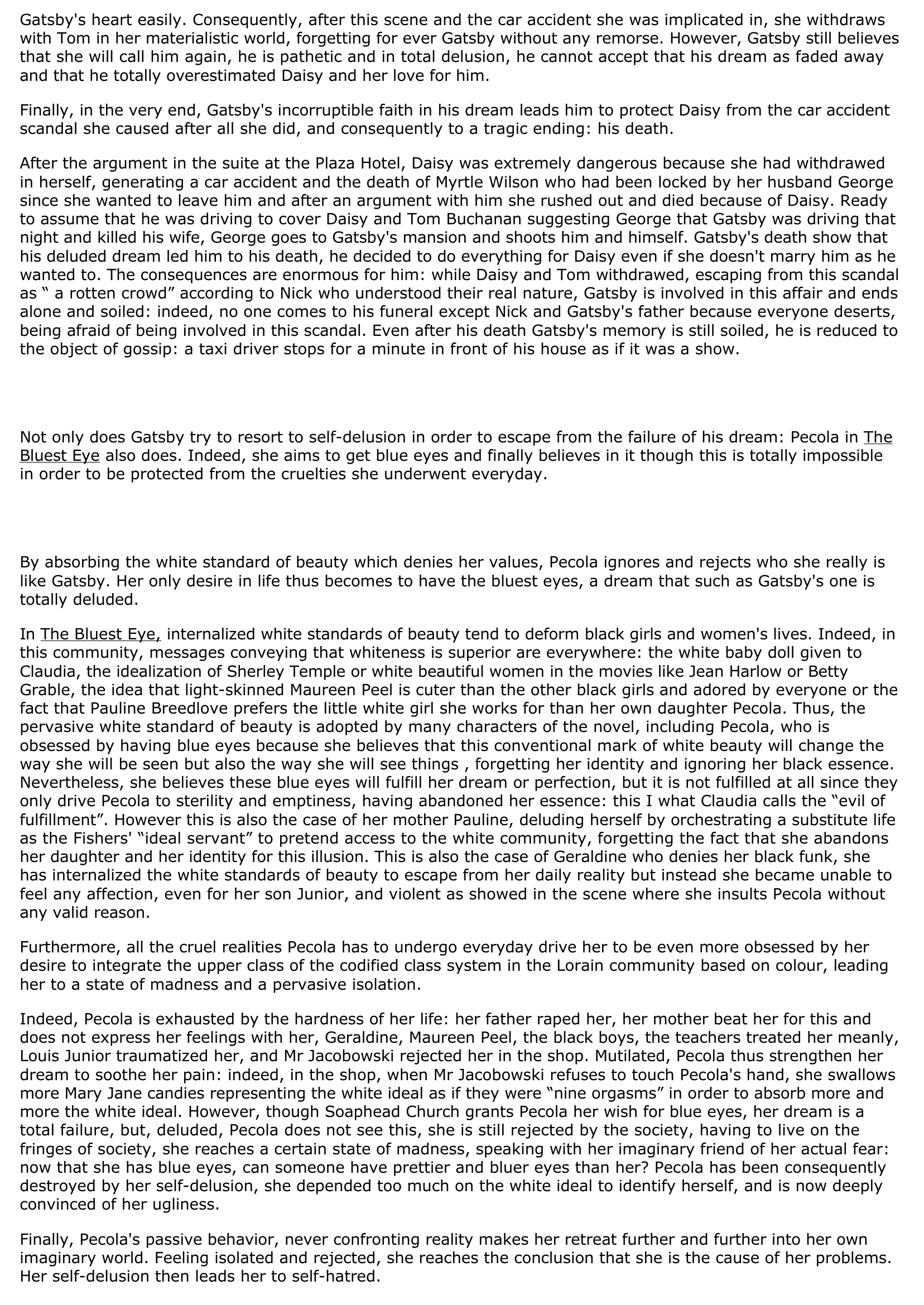