Subject: What are the impacts of racism on black people in the United States

« Effect/Consequence Essay Outline Subject: What are the impacts of racism on black people in the United States 1) speech, Martin Luther King said, "I Have a Dream", for America being a "nation where black people will not be judged by the color of their skin but by the content of their character".

However, heavy history (social, political, and economic exploitation,) we will see that African Americans far this utopian direction, considering repercussions of racism, in terms health and unequal relationship with the American system. 2) In the first instance, has had devastating effects currently experiencing a deterioration (psychological and physical health).

From a psychological standpoint, the minds have largely been tainted --- subconscious inferiority complex.

Jessica Jackson, "exposure to racial stress can cause depression, feelings of hopelessness, heightened anxiety, feelings of betrayal, hypervigilance, and hyperarousal".

Other words, racism/ discrimination = major source of stress + horrible effects on them.

Furthermore, individuals who experience racism = more prone to have destructive behaviors (such as smoking, drinking, drug use and unhealthy eating habits) = horrible consequences on their body.

As an example, a study level of ethnic discrimination found "Applicants with 'white' sounding names had more than 50 percent fewer returns than those with 'black' names".

Therefore, overrepresentation ---in the prison system. 4) In sum, must realize racism= has a significant impact on.

Racism =makes them subject to a lot of symptoms (stresses, depression, and bad habits).

In addition, R has been translated into a system -----, as a result, ---African Americans face disparities in employment and are targeted by the legal system. 5) List of sources Black Employment Is Hindered by Systemic Racism | LiveCareer Discriminations sur le marché du travail aux États-Unis | The Abdul Latif Jameel Poverty Action Lab 13th Documentary: A Movie Summary Of The Events - Free Essay Example | EduZaurus ‘In Good Times Racism Is A Stressor, In Bad Times Racism Is Trauma’: Three Black Psychologists Talk About The Emotional Toll Of The Election On Black America (forbes.com). » 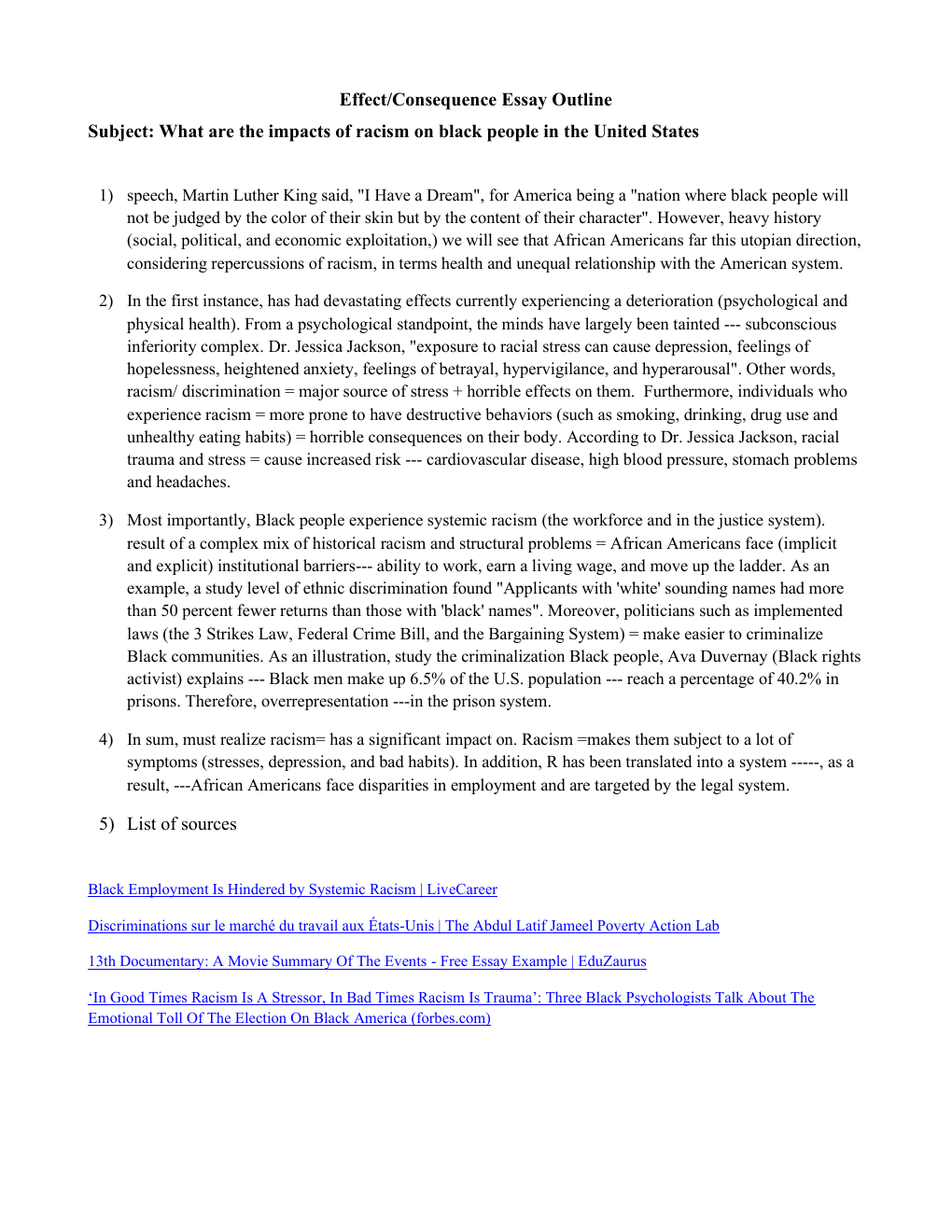 subject what are the impacts racism black people united states