« Intact dilation and extraction, also referred to as a partial birth abortion, consists of partially removing the fetus from the uterus through the vaginal canal, feet first,and using suction to remove the brain and spinal fluid from the skull.

The skull is then collapsed to allow complete removal of the fetus from the uterus. III SOCIAL AND ETHICAL ISSUES Abortion has become one of the most widely debated ethical issues of our time.

On one side are pro-choice supporters—individuals who favor a woman’s reproductiverights, including the right to choose to have an abortion.

On the other side are the pro-life advocates, who may oppose abortion for any reason or who may only acceptabortion in extreme circumstances, as when the mother’s life would be threatened by carrying a pregnancy to term.

At one end of this ethical spectrum are pro-choicedefenders who believe the fetus is only a potential human being when it becomes viable, that is, able to survive outside its mother’s womb.

Until this time the fetus hasno legal rights—the rights belong to the woman carrying the fetus, who can decide whether or not to bring the pregnancy to full term.

At the other end of the spectrumare pro-life supporters who believe the fetus is a human being from the time of conception.

As such, the fetus has the legal right to life from the moment the egg andsperm unite.

Between these positions lies a continuum of ethical, religious, and political positions. A variety of ethical arguments have been made on both sides of the abortion issue, but no consensus or compromise has ever been reached because, in the publicpolicy debate, the most vocal pro-choice and pro-life champions have radically different views about the status of a fetus.

Embryology, the study of fetal development, offers little insight about the fetus’s status at the time of conception, further confounding the issue for both sides.

In addition, the point during pregnancy when a fetusbecomes viable has changed over the years as medical advances have made it possible to keep a premature baby alive at an earlier stage.

The current definition ofviability is generally accepted at about 24 weeks gestation; a small percentage of babies born at about 22 weeks gestation have been kept alive with intensive medicalcare.

Despite the most advanced medical care, however, babies born prematurely are more at risk for long-term medical and developmental problems. This combination of medical ambiguities and emotional political confrontations has led to considerable hostility in the abortion debate.

For many people, however, thelines between pro-choice and pro-life are blurred and the issue is far less polarized.

Many women who consider themselves pro-life supporters are concerned aboutpossible threats to reproductive rights and the danger of allowing the government to decide what medical options are available to them.

Similarly, many pro-choiceindividuals are deeply saddened by the act of abortion and seek to minimize its use through better education about birth control, and, in particular, emergencycontraception, birth-control methods that prevent pregnancy after unprotected sexual intercourse. IV REGULATION OF ABORTION Abortion has been practiced around the world since ancient times as a crude method of birth control.

Although many religions forbade or restricted the practice,abortion was not considered illegal in most countries until the 19th century.

There were laws prior to this time, however, that banned abortion after quickening —that is, the time that fetal movement can first be felt.

In 1803 England banned all abortions, and this policy soon spread to Asia, Africa, and Latin America.

Throughout themiddle and late 1800s, many states in the United States enacted similar laws banning abortion.

In the 20th century, however, many nations began to relax their lawsagainst abortion.

In the 1960s and 1970s, much of Europe and Asia, along with the United States, legalized abortion. An estimated 46 million abortions are performed worldwide each year, of which 20 million are performed in countries where abortion is restricted or prohibited by law.Illegal abortions are more likely to be performed by untrained people, in unsanitary conditions, or with unsafe surgical procedures or drugs.

As a result, illegal abortionaccounts for an estimated 78,000 deaths worldwide each year, or about one in seven pregnancy-related deaths.

In some African countries, illegal abortion maycontribute to up to 50 percent of pregnancy-related deaths.

In Romania, where abortion was outlawed from 1966 to 1989, an estimated 86 percent of pregnancy-related deaths were caused by illegal abortion.

In the following four years, otherstates expanded the use of abortion to include cases in which a pregnancy threatens a woman’s health, the fetus has serious abnormalities, or the pregnancy is theresult of incest (sexual intercourse between close relatives).

Bolton, that effectively legalized abortion for any reason before the 24th week of pregnancy, the point when the fetus becomes viable.

The ruling allowed individual states toenact laws restricting abortion after viability, except in cases when abortion is necessary to preserve the life or health of the woman. In 1976 the Supreme Court recognized the right of pregnant girls under the age of 18, known as mature minors, to have abortions.

Three years later the Court ruledthat states may require the consent of one parent of a minor requesting an abortion.

Parental consent is not necessary if a confidential alternative form of review, suchas a judicial hearing, is made available for young women who choose not to involve their parents.

The Court stated that a judge in a hearing must approve a minor’sabortion, in place of her parents, if the judge finds that the minor is mature enough to make the decision on her own.

If the judge finds that the minor is not capable ofmaking this decision on her own, he or she can decide whether the abortion is in the minor’s best interest. Since these decisions, about 40 states have enacted and enforced parental consent or notification laws, although some laws have been contested in courts for years.

Minnesota, the Supreme Court upheld a law requiring that prior notice be provided to both parents of a minor before an abortion is performed.

In a similar case arising in Ohio that same year, the court upheld a requirement for notice or consent of one parent.

In 2000, however, the New JerseySupreme Court struck down a law requiring parental notice for unmarried girls under age 18. Other state-imposed restrictions regulate who pays for abortions, where abortions are performed, and what information is provided to women seeking abortions.

Forexample, in 1977 the Supreme Court allowed states to limit the use of Medicaid funds (government assistance for health care) for payment of elective abortions—that is, those abortions not medically required.

A law upheld by the Supreme Court in 1980 restricted the availability of federal Medicaid funding for abortions deemedmedically necessary.

After that ruling, abortion payments for poor women in many states were limited to cases in which pregnancy threatened the woman’s life.

Also in1977, the Supreme Court allowed the city of St.

Louis, Missouri, to exclude elective abortions from procedures performed in a public hospital. In 1983 the Court found it unconstitutional to require that a woman considering an abortion be given information developed by the state about risks or consequencesand wait 24 hours after receiving information before having the abortion.

Similarly, in 1986 the Court struck down a comprehensive Pennsylvania law requiring thatstate-developed materials about abortion be offered to women undergoing the procedure. Since the 1989 Supreme Court decision in Webster v.

The Webster case upheld a Missouri law that prohibits the use of public facilities or public employees for abortion and requires a physician to determine the viability of a fetus olderthan 20 weeks before performing an abortion.

Sullivan, the Court upheld a federal policy that prevented health-care providers who received federal funding from engaging in any activities that encouraged or promoted abortion as a method of family planning. 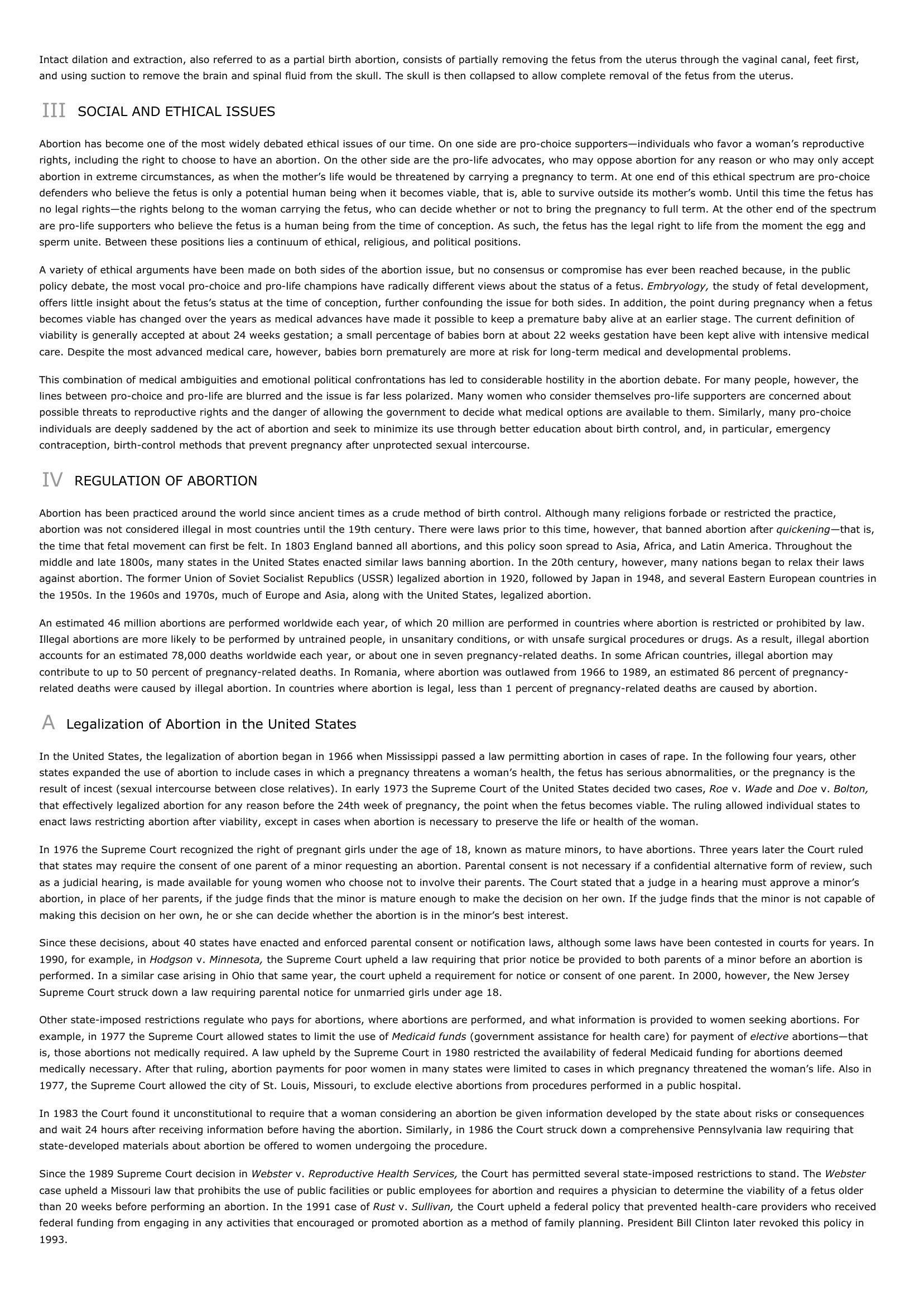