« free state to keep the balance in the Senate.

It also provided that slavery would be excluded from the still unorganized part of the Louisiana Territory.

A line was drawnfrom Missouri’s southern boundary, at the latitude of 36°30’, and slavery would not be allowed in the territory north of that line,with the exception of Missouri. B Compromise of 1850 Agitation against slavery continued in the North.

The South reacted by defending it ever more strongly.

The Mexican War, by which the United States made good itsannexation of Texas and acquired New Mexico, Arizona, California, and several of the present Rocky Mountain states, led to a new crisis.

Antislavery forces demandedthat slavery be excluded from any lands ceded by Mexico.

Slaveholders pressed for their share of the new territories and for other safeguards to protect slavery.

For atime the country seemed to be headed for civil war.

Again a solution was found in compromise.The settlement was the Compromise Measures of 1850.

Among otherthings, this compromise admitted California as a free state and set up territorial governments in the remainder of the Mexican cession with authority to decide forthemselves whether to permit slavery or not.

Moderates in both North and South hoped that the slavery question was settled, at least for a while. C Uncle Tom’s Cabin The year after the compromise a literary event shook the country.

Harriet Beecher Stowe wrote an antislavery novel, Uncle Tom’s Cabin, that was published serially in a newspaper in 1851 and in book form the year after.

It was widely read in the United States and abroad and moved many to join the cause of abolition.

The Southindignantly denied this indictment of slavery.

Douglas of Illinois introduced a bill to organize the territories of Kansas and Nebraska, thus opening these areas to white settlement.

Asfinally passed, the Kansas-Nebraska Act repealed the Missouri Compromise and provided that settlers in the territories should decide “all questions pertaining toslavery.” This doctrine was known as popular sovereignty.

Since Kansas and Nebraska were north of the line established in the Missouri Compromise, the act madepossible the extension of the slave system into territory previously considered free soil.

Soon, settlers in Kansas were engaged in a bloody battle to decide the slaveryissue ( see Border War). The passage of the act caused a political explosion in the North.

Abraham Lincoln, a longtime member of the Whig Party, represented the view of many thousands whenhe wrote, in the third person, that “the repeal of the Missouri Compromise aroused him as he had never been before.” Antislavery groups met to form a new party,which they named the Republican Party.

By 1856 the party was broad enough and strong enough to put a national ticket, headed by John C.

The Republicans lost by a relatively narrow margin. E Dred Scott Case In 1857 the Supreme Court of the United States added to the mounting tension by its decision in the Dred Scott Case.

In that case, Dred Scott, a slave, sued for his freedom on the grounds that when his master had taken him to free territories, Scott was no longer a slave.

In separate opinions a majority of the justices held thatScott did not have the right to file suit in state or federal courts because he was not a citizen of the United States.

As a slave, he was considered property.

The justicescontinued to write that Congress had no power to exclude slavery from the territories.

Therefore, the Missouri Compromise and other legislation limiting slavery wereunconstitutional. F Lincoln-Douglas Debates In 1858 Douglas was running for reelection to the Senate.

His opponent was Abraham Lincoln, then the leader of the Republican Party in Illinois.

In a series of sevendebates, Lincoln and Douglas argued, among other things, the question of the extension of slavery.

Douglas stood on his doctrine of popular sovereignty, holding thatthe people of the territories could elect to have slavery.

They could also elect not to have it.

Lincoln, on the other hand, argued that slavery was “a moral, a social, anda political wrong” and that it was the duty of the federal government to prohibit its extension into the territories. Although the Republicans carried the state ticket and outvoted the Democrats, the Illinois legislature reelected Douglas to the Senate.

The campaign, widely reported inthe newspapers, had an importance far beyond the fate of the two candidates.

It demonstrated to the South that the Republican Party was steadily growing in strengthand that it would oppose the extension of slavery by every possible means.

The campaign also showed Douglas to be an unreliable ally of the South.

He had saidrepeatedly in the debates that he did not care whether slavery was voted up or down.

In addition, Lincoln, hitherto known only locally, gained a national reputation evenin defeat. G John Brown’s Raid As soon as the 1858 elections were over, political maneuvering began over the 1860 presidential election.

Many states were in the process of choosing delegates to thenational conventions when news of a raid on Harpers Ferry, Virginia (now West Virginia), swept the nation.

On October 16, 1859, the raiders had seized the federalarmory and arsenal there.

Authorities found that the raid had been led by John Brown, whose raids and murders in Kansas andMissouri had already made him an outlaw.

Brown and his followers had planned to march their army into the South to forcibly free slaves.

When he was executed for his crime, thousands of Northerners hailed him as a martyr, while Southerners became increasingly fearful of armedintervention in their states by Northern abolitionists. H Election of 1860 The slavery question overshadowed all others in the presidential election year of 1860.

At the Democratic National Convention, held in Charleston, South Carolina, onApril 23, the delegates from the South refused to support Douglas, the leading contender, because of his position on slavery, and they prevented the naming of acandidate.

The convention adjourned to meet on June 18 in Baltimore, Maryland.

On May 16 the Republican National Convention met in Chicago, Illinois, and passedover the two most popular aspirants, William H.

Instead they nominated the lesser known Abraham Lincoln.

In Baltimore, at thereconvened Democratic convention after several days of wrangling, the Southern delegates walked out of the convention.

Those who remained nominated Douglas.

The Democratic Party, long a unifying force in the nation, was thus split over sectionaldifferences into two bitterly opposed factions.

The Constitutional Union Party, a group of conservatives who condemned sectional parties, placed a fourth ticket, headedby John Bell of Tennessee, in the field. Because of this division, Lincoln won easily, although he did not receive a majority of the popular vote.

Lincoln won in the electoral college, where he received 180 votes against 72 for Breckinridge, 39 for Bell, and 12 for Douglas.. » 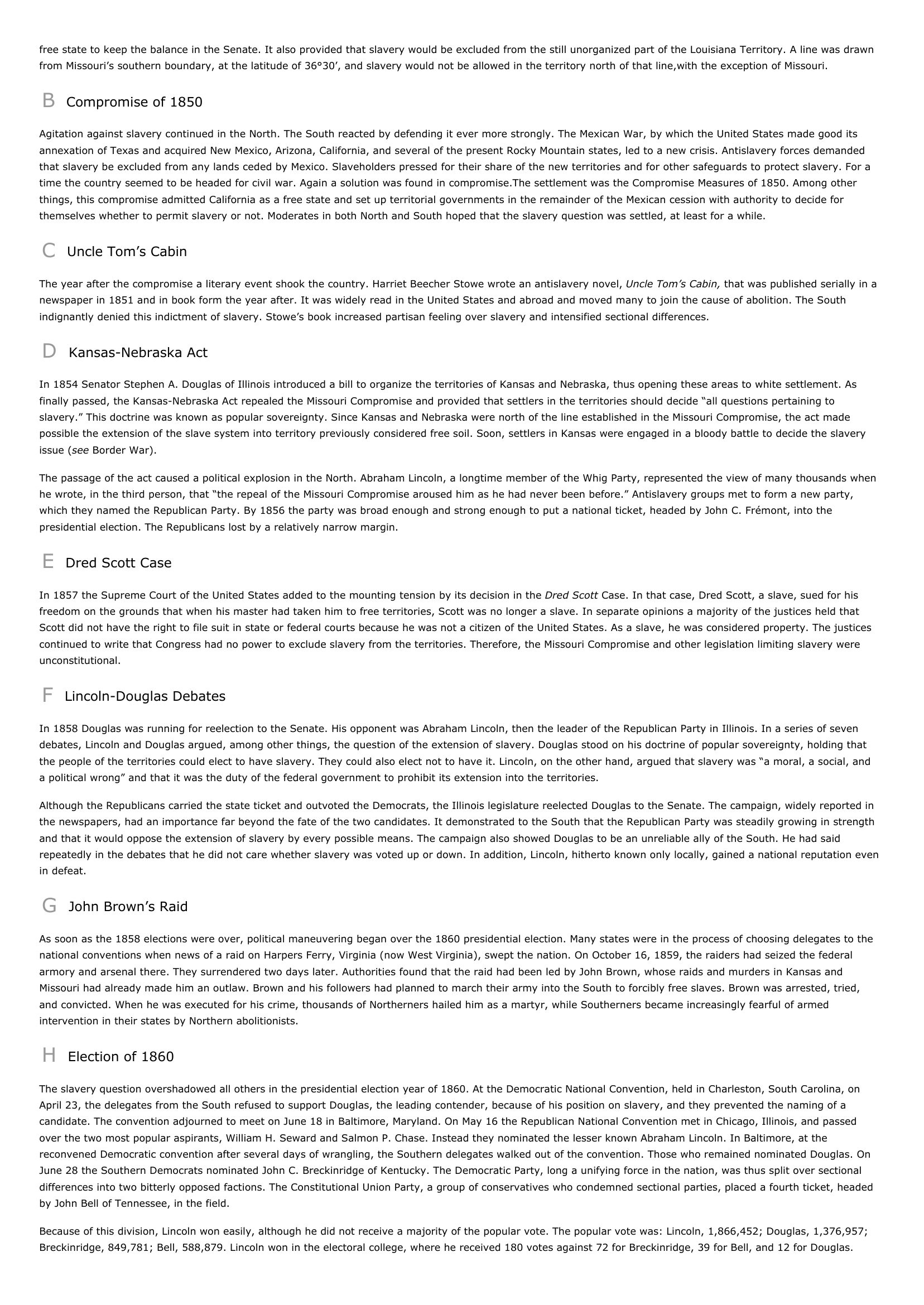