If there are different variations to a collectible, the least common one is usually worth more.

Often there areinteresting stories behind rarities, such as the highly sought-after 1909 Honus Wagner baseball card.

At that time tobacco companies manufactured and distributedbaseball cards, and when the antitobacco Wagner complained, his card was pulled from production.

Very few copies in good condition have ever been found. C Age Age is often an indicator of potential value, because there are probably fewer similar items that have survived the passage of time.

However, older is not always better.Some brand-new action figures are so popular and collectible that they may be more valuable and more interesting to collectors than some action figures from the1960s.

The best way to determine an item’s rarity is to do specific research, or ask a dealer or expert. D Packaging Original packaging can often add to the charm and value of an item and also offer important clues to an item’s age and manufacturer.

A 1967 GI Nurse action figure byHasbro can sell for $4,500 in its original box; it might bring half that amount or less without its original packaging.

Because most original buyers threw the packagingaway, the packaging adds an extra element of rarity to the item.

Collectibles in their original packaging are sometimes graded “mint in box” or similar designations. E Regional Interest For some items, collectors are often more interested in items from their own region, so the value is often higher there.

Pennsylvania Dutch furniture, for example,typically draws more interest on the East Coast than in California.

Conversely, California pottery might have a smaller audience in Massachusetts.

A book written by alocal author will generally be valued more highly by collectors from that region. V BUYING AND SELLING COLLECTIBLES Collecting and collectibles is a huge business, with millions of dollars exchanged every year through shops, Internet transactions, auctions, and other venues.

TheInternet, particularly auction sites such as eBay and Yahoo! and online storefronts such as Ruby Lane and collectiblestoday.com, has become one of the leading placesfor collectors to connect with each other, learn about their hobby, and buy and sell.

Before the Internet, finding a specific Hot Wheels car, for example, may haverequired a long odyssey through shops, shows, and publications.

Now, collectors can easily search the world for specific collectibles with the click of a mouse.

Pictures ofitems are often included on the Web, so potential buyers can see what they are getting. Established auction houses, such as Christie’s and Sotheby’s, hold in-person auctions for collectibles, and similar live events, such as estate sales and country auctions,often feature collectibles.

Buyers bid on items in much the same way they would online, although in-person auctions make it easier to survey the competition and viewthe items up close. Shops and malls for collectibles exist in almost every city and small town.

A show could be as simple as a small flea market held at a fairgrounds or churchyard every Saturday, or a large organized event wherehundreds of dealers rent booth space and buyers pay admission.

One of the largest indoor antiques and collectibles shows in the world is Atlantique City, which drawsmore than 1,000 sellers twice every year in Atlantic City, New Jersey.

Large shows such as this may offer free item appraisals and other services for the collector. Publications such as the Antique Trader and Collector magazine are convenient sources for collectors to buy, sell, and read more about antiques and collectibles.

More specialized magazines, such as Toy Shop , Coins Magazine , Comics Buyer’s Guide , Teddy Bear and Friends, and club newsletters are helpful as well, offering information and advertising of interest to collectors in these specific categories. Collector clubs are another popular way to buy and sell collectibles as well as learn more about a particular type of collecting.

These groups include informal regionalorganizations and more formalized national groups, offering support and information on specific antiques and collectibles.

They often publish newsletters and sponsorlocal and national conventions to aid and inform collectors. VI HISTORY OF COLLECTING The histories of collecting coins or books—practices dating back thousands of years—are well documented.

It is more difficult to trace the origins of collecting as apopular hobby.

Humans may have always had the inclination to collect objects that they found interesting or attractive, but it is only in the last 150 years or so thatpeople have had the time and money to indulge in the hobby in great numbers.

It is also in that time that manufactured goods have become common and obtainable tomany.

The roots of collecting are therefore actually found in a few important societal trends, including the Industrial Revolution and the subsequent rise in massproduction, income, and leisure time, and the growth of consumer culture. A Early Collecting One of the first recorded signs of collectibles was the use of characters to promote products.

In the 1880s many businesses tried selling more products by using theimage of a popular character.

Soon many people bought certain products as much for the famous characters associated with the item as for the product itself.

This was the beginning ofadvertising-character collectibles, a huge segment of the collecting world today. An important milestone in the hobby came in 1892, when the United States Mint issued its first commemorative coins.

The coins marked the 400th anniversary of thearrival of Europeans in the Americas.

They were among the earliest items manufactured specifically for the purpose of being saved (collected) rather than used.Commemorative coins have become a very popular collectible. In the 1930s radio shows were the biggest vehicle for popular culture, and advertisers began using premiums (promotional giveaways) to help generate interest in the shows and their products.

One major sponsor that gave out premiums was the chocolate malt drink Ovaltine. Children who grew up with these shows often became collectors of the premiums as adults. B Post-World War II Collecting While many products made in the first half of the 20th century would eventually become collector’s items, the collecting culture really began in earnest after World WarII (1939-1945).

In the United States, the revitalized economy and increased leisure time enabled even more people to take up hobbies such as collecting. 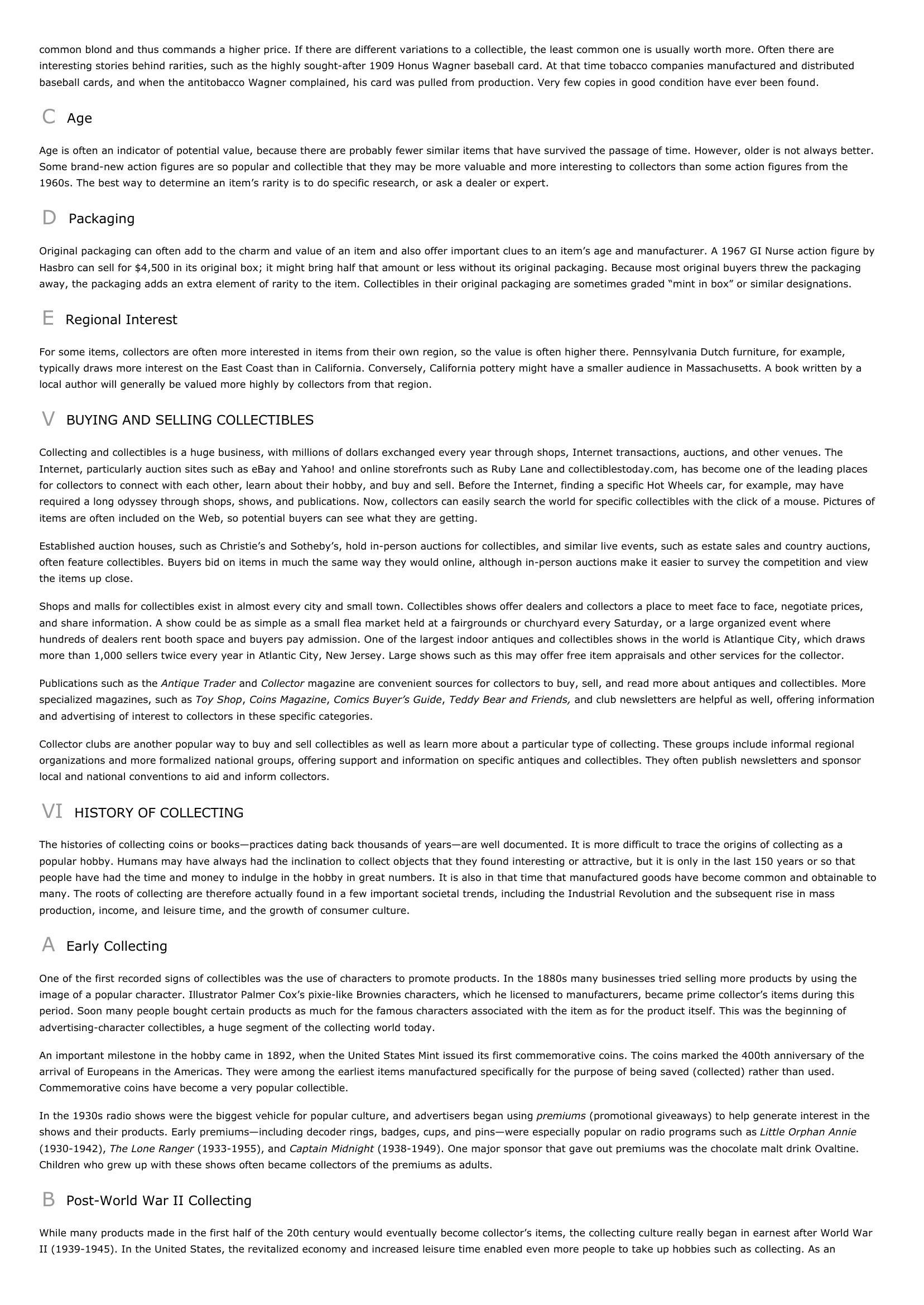