« D Vegetation Although much of Europe, particularly the west, was originally covered by forest, the vegetation has been transformed by human habitation and the clearing of land.Only in the most northerly mountains and in parts of north central European Russia has the forest cover been relatively unaffected by human activity.

On the otherhand, a considerable amount of Europe is covered by woodland that has been planted or has reoccupied cleared lands. The largest vegetation zone in Europe, cutting across the middle portion of the continent from the Atlantic to the Urals, is a belt of mixed deciduous and coniferoustrees—oak, maple, and elm intermingled with pine and fir.

The Arctic coastal regions of northern Europe and the upper slopes of its highest mountains are characterizedby tundra vegetation, which consists mostly of lichens, mosses, shrubs, and wild flowers.

The milder, but nevertheless cool temperatures of inland northern Europecreate an environment favorable to a continuous cover of coniferous trees, especially spruce and pine, although birch and aspen also occur.

Much of the Great EuropeanPlain is covered with prairies, areas of relatively tall grasses, and Ukraine is characterized by steppe, a flat and comparatively dry region with short grasses.

Landsbordering the Mediterranean are noted for their fruit, especially olives, citrus fruit, figs, apricots, and grapes. E Animal Life At one time Europe was home to large numbers of a wide variety of animals, such as deer, moose, bison, boar, wolf, and bear.

Because humans have occupied ordeveloped so much of Europe, however, many species of animals have either become extinct or been greatly reduced in number.

Today, deer, moose, wolf, and bearcan be found in the wild state in significant numbers only in northern Scandinavia and Russia and in the Balkan Peninsula.

Elsewhere they exist mainly in protectedpreserves.

Reindeer (domesticated caribou) are herded by the Saami of the far north.

Chamois and ibex are found in the higher elevations of the Pyrenees and Alps.Europe still has many smaller animals, such as weasel, ferret, hare, rabbit, hedgehog, lemming, fox, and squirrel.

Storks are thought to bring good luck to the houses on which they nest, particularly in theLow Countries, and swans ornament many European rivers and lakes.

Scottish, Irish, and Rhine salmon are prized fish here, and in the coastal marine waters are founda large variety of fish, including the commercially important cod, mackerel, herring, and tuna.

The Black and Caspian seas contain sturgeon, the source of caviar. F Mineral Resources Europe has a wide variety of mineral resources.

Coal is found in great quantity in several places in Britain, and the Ruhr district of Germany and Ukraine also haveextensive coal beds.

Major sources of European ironore today are the mines at Kiruna in northern Sweden, the Lorraine region of France, and Ukraine.

Europe has a number of small petroleum and natural-gas producingareas, but the two major regions are the North Sea (with the United Kingdom, The Netherlands, Germany, and Norway owning most of the rights) and the formerSoviet republics, especially Russia.

Among the many other mineral deposits of Europe are copper, lead, tin, bauxite, manganese, nickel, gold, silver, potash, clay,gypsum, dolomite, and salt. III THE PEOPLE Although it is not precisely known when humans first lived in Europe, they probably migrated there from the east in several waves, mostly via a no longer extant landbridge from Asia Minor into the Balkans and by way of grasslands north of the Black Sea.

Parts of Europe had a substantial human population by about 4000 BC. Geographical barriers such as forests, mountains, and swamps helped divide the peoples into groups that remained largely separate for long periods.

Some intermixingof peoples occurred as a result of migrations, however. A Ethnology Europe includes a large number of ethnic groups—persons associated by a common culture, especially language.

European nations are generally composed of onedominant group, such as the Germans of Germany and the French of France.

Several countries, particularly in south central Europe, have large minorities, and mostcountries contain smaller groups, such as the Basques of Spain and the Saami of Norway.

In addition, substantial numbers of Asian Turks, black Africans, and Arabs livein western Europe, many of them as workers on a temporary basis.

The collapse of Communism during the period from 1989 to 1991 led to the breakup of the USSRinto 15 separate republics, each with its own dominant ethnic group.

The Croats, Slovenes, and Macedonian Slavs, each of which constituted the largest part of thepopulation in their respective republics within Yugoslavia, all voted to secede from Yugoslavia in 1991 to become independent nations.

Bosnia and Herzegovina, with amore diverse array of ethnic groups, became the site of great ethnic conflict after declaring its independence from Yugoslavia in 1992.

More recently, Serbia’s southernprovince of Kosovo (administered by UN) has been the site of additional ethnic conflict between Serbian nationalists and ethnic Albanians living in Kosovo (administeredby UN). B Demography The distribution of the European population has not been stable over long periods, but has shifted, both through differential birth and death rates and by migration.

Atthe beginning of the Christian era, the most densely populated part of Europe bordered the Mediterranean Sea.

At the beginning of the 21st century Europe had thesecond highest overall population density of the continents, after Asia.

The most heavily populated area was a belt beginning in England and continuing eastwardthrough the Low Countries, Germany, the Czech Republic and Slovakia, Poland, and into European Russia.

Northern Italy also had a high population density. The average annual growth rate for the European population from 1985 to 1995 was only 0.28 percent; in the same period the population of Asia grew by 1.69 percentper year, and that of North America by 1.33 percent annually.

By 2000 the population was actually decreasing.

Italian, Yugoslav, Greek, Spanish, and Portuguese workers (as well as some from Asian Turkey, Algeria, and other non-European areas) moved—mostly on a nonpermanent basis—toGermany, France, Switzerland, Britain, and other countries in search of jobs.

In addition, many Europeans moved within national boundaries from rural areas to cities.From 1950 to 1975, the population of Western Europe changed from roughly 70 to nearly 80 percent urban; that of Eastern Europe grew from 35 to 60 percent urban.On the other hand, far fewer Europeans left the continent than in the 19th and early 20th centuries.

Most people leaving Europe in the late 20th century migrated toSouth America, Canada, or Australia. In most European countries the national capital is the largest city, but the continent has many additional cities of substantial size.

Most European capitals have greateconomic and cultural significance and contain many noted historical sites.

Among the most famous cities are Berlin, Budapest, London, Madrid, Moscow, Paris, Prague,. » 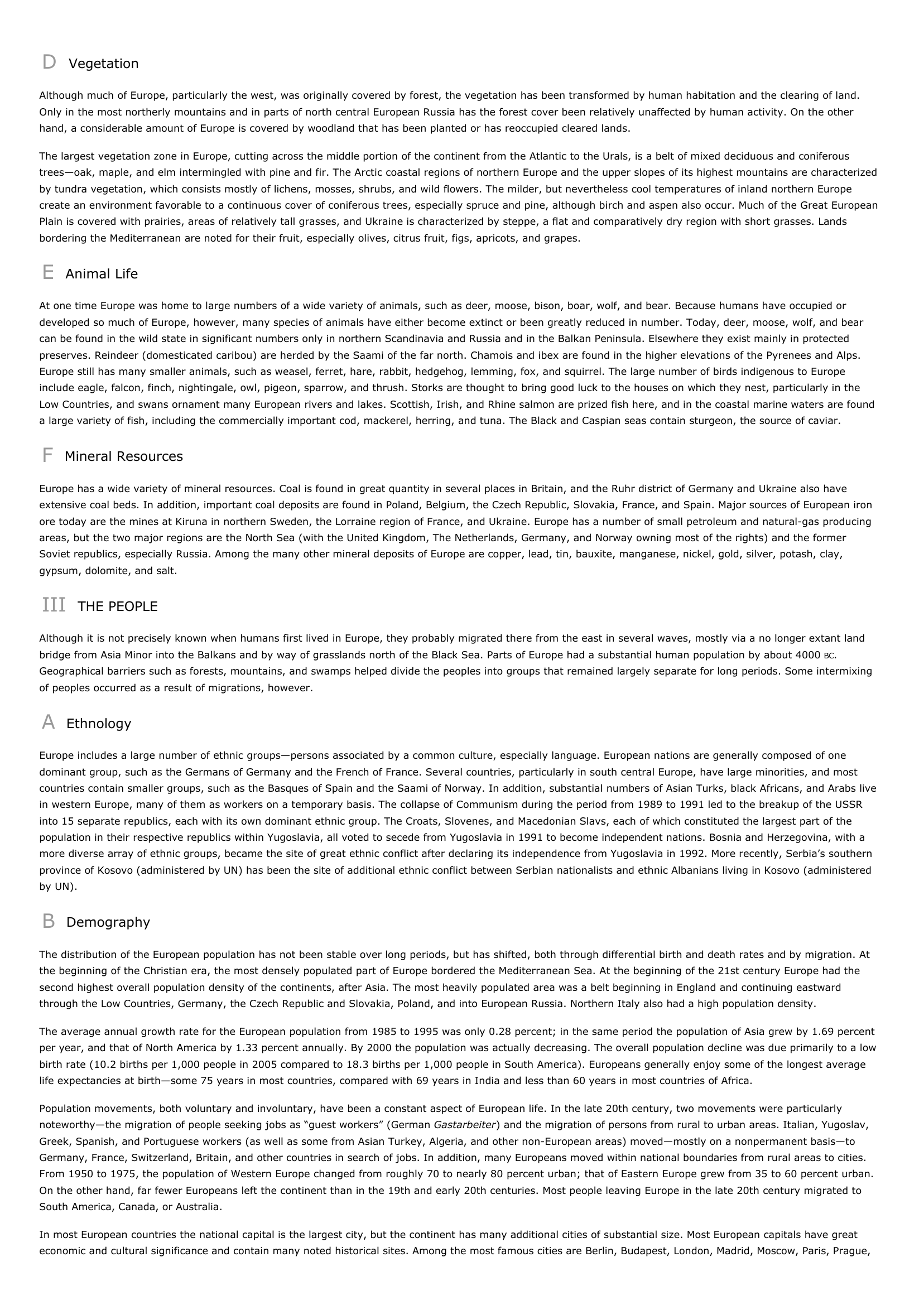