« During the 1720s and 1730s Handel worked primarily as a composer and producer of operas for the London stage.

This extremely productive phase of his career beganwith the opening of the Royal Academy of Music in London in 1719.

The Royal Academy was founded with the support of the king and aristocratic subscribers for theproduction of Italian operas.

Its directors sent Handel to continental Europe to hire some of the world’s greatest singers.

Handel was not the only composer writingoperas for Academy productions, however.

The Academy opened in 1720 with a production of Italian composer Giovanni Porta’s Numitore, and during the first years of the Academy the operas of Giovanni Bononcini, another Italian, received more performances than Handel’s operas.

The rivalry of the two composers was celebrated bypoet John Byrom: “Some say, compar’d to Bononcini, that Mynheer Handel’s but a ninny.

Others aver that he to Handel is scarcely fit to hold a candle.

Strange all thisdifference should be twixt tweedledum and tweedledee.” The Academy produced some of Handel’s greatest operas: Radamisto (1720), Giulio Cesare (1724), Tamerlano (1724), and Rodelinda (1725).

But in 1728, financial difficulties and quarrels among its directors led to the Academy’s collapse.

The year before, Handel had become a naturalized citizen of Britain. Handel and Swiss opera manager J.

Heidegger founded a new Academy in 1729.

It faced competition from the Opera of the Nobility, a rival opera company foundedin 1733 with the support of the Prince of Wales.

Although the prince’s company lured away many of Handel’s singers, Handel continued to compose and produce operasuntil both companies went under in 1737.

These years also saw the production of some of Handel’s best operas, including those based on chapters from Italian writerLudovico Ariosto’s epic poem Orlando furioso (1516): Orlando (1733), Ariodante (1735), and Alcina (1735).

Handel suffered a stroke in 1737 and later that year joined a new opera company, probably managed by Heidegger.

Although Handel continued to write operas until 1741, he had by then also written a number of oratorios.

Theoratorio provided a new direction for his last decades of creativity. B English Oratorios Handel began to concentrate on oratorios in English in 1732, following a successful revival of Esther in London that year, and by the 1740s he composed an average of two a year.

His oratorios differ from his operas in a number of respects.

Unlike opera, oratorios are performed in concert, without costumes, scenery, or staging, andare consequently less expensive to produce.

Whereas his Italian operas generally draw upon ancient history, mythology, or epic poems for their plots, the English textsfor the oratorios are most often based upon the Hebrew Scriptures.

Like opera, oratorio includes recitative (singing of text over sparse instrumental accompaniment, without a specified meter) and aria (an air or song with musical accompaniment, sung by one person), but the arias in Handel’s oratorios are generally simpler and less florid than those in his operas.

There are two probable reasons for this simplicity.

First, Handel used many native English singers in his oratorios, who though skilledlacked the virtuosity of international opera stars.

Second, oratorio does not rely on the ornamented “exit aria” that an opera singer performed before leaving the stage.Oratorio provided Handel with the opportunity to compose many grand choruses, on which his reputation today rests.

Handel also wrote works similar to oratorios butwithout dramatic plots; these works were based on poems by English poets John Dryden ( Alexander’s Feast, 1736) and John Milton ( L’Allegro, il Penseroso ed il Moderato, 1740). The most famous of Handel’s oratorios is without doubt Messiah (1742), which has remained part of the repertoire from Handel’s time until our own.

Some of his best instrumental works were written to be played with the oratorios, including the organ concertos (works for solo organ accompanied by orchestra) of Opus 4 (1738) andthe 12 concerti grossi (works for orchestra alone) of Opus 6 (1740).

Handel also created the well-known Music for the Royal Fireworks in 1749 to celebrate the end of the War of Austrian Succession (1740-1748). While composing the chorus “How dark, O Lord, are thy decrees” for the oratorio Jephtha in 1751, Handel began to lose his eyesight, although he completed Jephtha in 1752.

During the last years of his life, Handel supervised revisions of his oratorios.

Handel died in his home and was buried in Westminster Abbey in London. III LEGACY Handel’s most important contribution to music history undoubtedly lies in his oratorios.

Although the genre had existed in the 17th century, Handel seems to haveinvented the special type known as English oratorio, with its dazzling choruses.

His influence on later generations can be seen most clearly in the history of the oratorio:Handel’s Messiah is one of only a few 18th-century works to remain in the performance repertory from its composer’s lifetime until today.

The oratorios of later composers Josef Haydn of Austria and Felix Mendelssohn of Germany are unthinkable without Handel. Handel was also an innovator in the realm of instrumental music.

His organ concertos, along with Bach’s harpsichord concertos, are among the earliest concertos tofeature a keyboard as the solo instrument.

Although Handel’s operas disappeared from the stage with the entire body of early 18th-century opera seria (serious opera), successful revivals during the 20th century have led to a rediscovery of the musical and dramatic effectiveness of Handel’s compositions for the theater.

Today Handel isrecognized by many as the greatest composer of late-baroque opera seria. In the final analysis, Handel’s legacy to the history of musical style lies in his special gift of melodic lyricism, the grandeur of his choral writing, and the dramatic powerof his works.

It is these qualities that have triumphed over time. Contributed By:David Ross HurleyMicrosoft ® Encarta ® 2009. © 1993-2008 Microsoft Corporation. 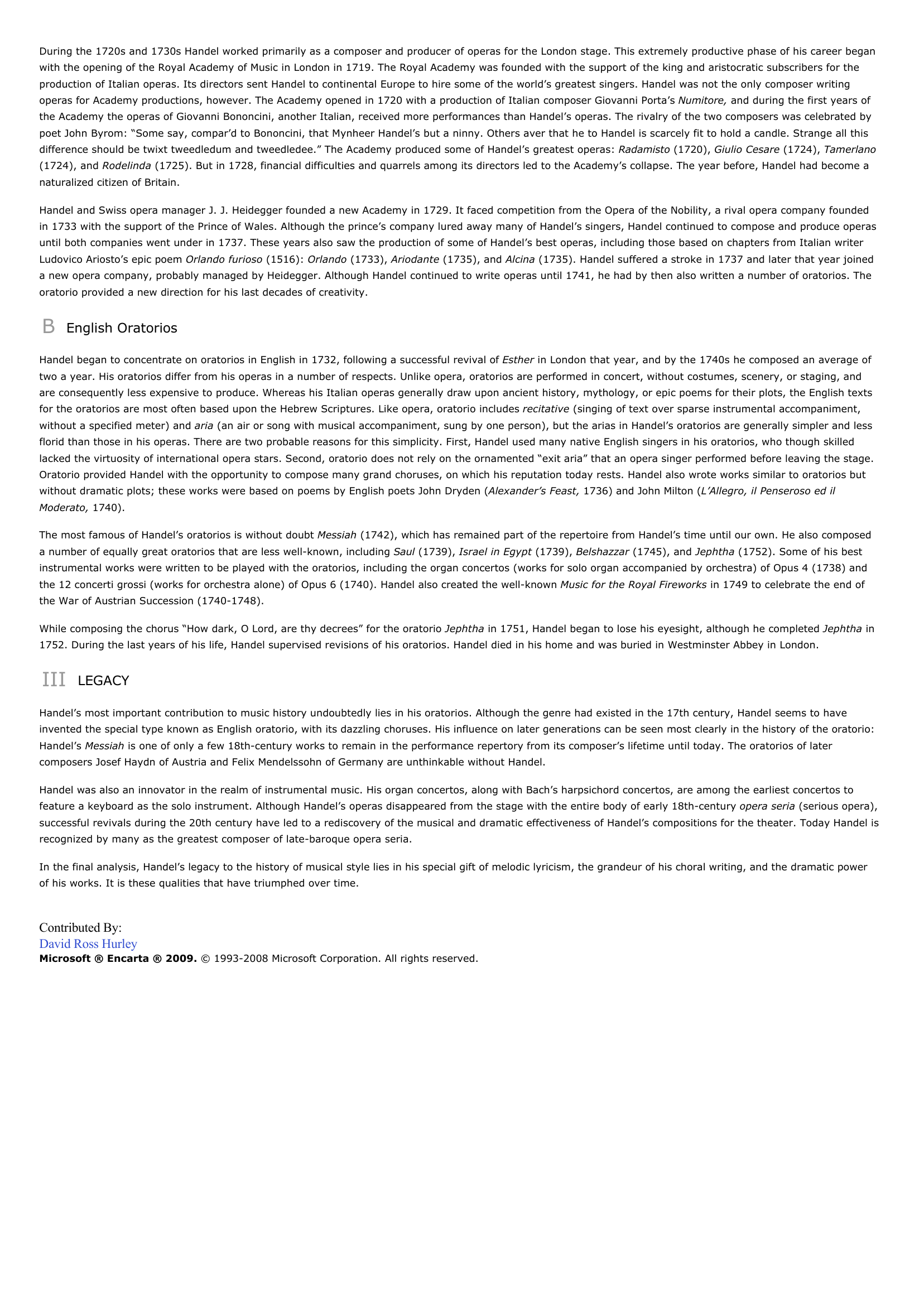