« be inferior and were not permitted a university education.

In the lowest caste were the African slaves. As the Spanish monarchy tried to increase its authority, it was hampered by the power of the Catholic Church.

The church, including various religious orders, hadacquired great wealth, including large holdings of land, in the colonies.

The Jesuit order especially had gained extraordinary wealth and political influence, and it alsocontrolled much of the university and high school education in the colonies.

In 1767 theking expelled the Jesuits from Spain and the colonies, and confiscated their great economic holdings.

Finally, in 1804, the crown seized all land and capital belonging tothe church’s charitable works and chantries (endowments for chanting Mass).

This action alienated many colonists and also many parish priests, most of whomdepended on the chantries for their meager incomes.

By 1810 many of the lower clergy were receptive to the talk of independence. B Enlightenment Ideas The frustration of the Spanish Americans was fueled by the intellectual movement of the Enlightenment.

With its emphasis on science and reason, the Enlightenmentchallenged political and social institutions such as monarchy, religion, mercantilism, and class distinctions.

Many Creoles read the works of the leading Enlightenmentwriters, and many future leaders of the Spanish-American independence movements spent time in Europe as students, soldiers, or on business. The American Revolution (1775-1783) and the French Revolution (1789-1799) provided an example for the Spanish American colonists.

Some Creoles fought in thoserevolutions, which were grounded in the ideas of the Enlightenment and saw colonists cast off monarchs to form independent, republican governments.

However, manySpanish Americans were also frightened by the social upheaval that followed the French Revolution, including the bloody war for independence in the French Caribbeancolony of Saint-Domingue, which became the nation of Haiti ( seeHaitian Slave Revolt). C Crisis in Spain At the same time that colonists were becoming dissatisfied with imperial rule, Spain began to face problems at home.

During the 18th and 19th centuries Spain becameinvolved in a number of international wars, which seriously strained the kingdom’s finances.

During the early years of the Napoleonic Wars (1799-1815), Spain waspressured by French emperor Napoleon I to join France in a war against Britain.

To isolate Britain from the European continent, Napoleon sent an army across Spain in1807 to attack Portugal, a British ally.

The French forced the Portuguese royal court to flee Lisbon for Brazil and cut off British access to Portugal’s ports.

This changedthe course of history for Brazil, making it the center of the Portuguese empire and postponing its independence for a decade and a half. After conquering Portugal, Napoleon turned on his Spanish allies and occupied a portion of northern Spain.

King Charles IV abdicated in 1808 and his son Ferdinand VIItook the throne.

But Napoleon deposed Ferdinand and made his own brother, Joseph Bonaparte, king instead.

This caused Spaniards to rise in rebellion against theFrench on May 2, 1808, in a war of independence ( seePeninsular War).

Refusing to recognize Bonaparte as king, councils called juntas formed in cities around Spain to fight the French and govern in the name of King Ferdinand.

These councils soon joined together and formed a central junta, later replaced by a Council of Regency.Despite the British sending an army to help the Spanish, the French controlled most of the country by 1809. III WARS FOR INDEPENDENCE The turmoil in Spain created confusion within its American colonies, since Spain could no longer exert control over its distant empire.

Just as in Spain, juntas arose in thecolonies, refusing to recognize Bonaparte and proclaiming their loyalty to the deposed king.

Some colonists viewed this as a temporary measure until the monarchy wasrestored, but others saw the crisis as an opportunity to take more control of their own affairs, or even to overthrow the viceroyalties and declare independence fromSpain.

From 1810 to 1814, the absence of control fromSpain gave many Creoles their first taste of self-government. When Ferdinand was restored to the Spanish throne in 1814, he attempted to reinstate absolute royal control over the empire, rejecting liberal reforms approved in1812 by Spain’s interim parliament.

But by then, many colonies had become dangerously comfortable governing themselves and were unwilling to return to theirsubordinate status.

In each colony, Spanish Americans divided into factions: the so-called patriots, who sought independence, and royalists, who supported Spanishrule.

Spanish America’s future would be decided in a series of military campaigns between these groups over the next decade. The independence movement in Spanish America was primarily an effort by the white elite of the colonies to achieve self-government for their class.

Some leadersadvocated abolition of slavery or other social changes, but these were not central issues.

Mestizos, Native Americans, and people of color, slave and free, fought on bothsides in the conflict. While the Napoleonic Wars precipitated the movement for independence in Spain’s American colonies, they delayed its outbreak in the Portuguese colony of Brazil.Portugal’s royal family, having fled Europe after Napoleon’s invasion, ruled from Brazil until 1820.

Although some revolts against royal authority occurred, independenceeventually came to Brazil in 1822 without bloodshed and with the support of the governing Portuguese prince. A Spanish South America In South America, the struggle for independence was marked by two major military campaigns, led by two key figures.

In the south, José de San Martín fought for independence in his native Argentina, as well as in Chile,Bolivia, and Peru. A1 Bolívar: Venezuela and New Granada Even before the Napoleonic Wars created a crisis in Spain, revolutionaries had sought independence in Venezuela, an autonomous region within the Viceroyalty of NewGranada.

In 1806 Francisco de Miranda, a Venezuelan who had fought in the American and French revolutions, launched an invasion of Venezuela from the UnitedStates with a single ship, but the expedition was easily defeated by the Spanish colonial regime. After the Spanish king Ferdinand was deposed, the town council of Caracas, Venezuela, formed a junta in April 1810, and it soon proclaimed independence from Spain.Bolívar, a wealthy young aristocrat, was sent to London to seek support for the independence movement.

Bolívar contacted Miranda and arranged for him to return toCaracas, where Miranda took control of the movement. On July 5, 1811, a congress in Caracas proclaimed the Republic of Venezuela, known as the First Republic.

However, royalist forces defeated the patriots, and Miranda,with cash and gold from the treasury, attempted to flee to Europe.

He was turned over to the royalists and eventually sent to Spain, where he died in a prison in 1816.Bolívar, who had tried but failed to defend the strategic port of Puerto Cabello, escaped to New Granada. 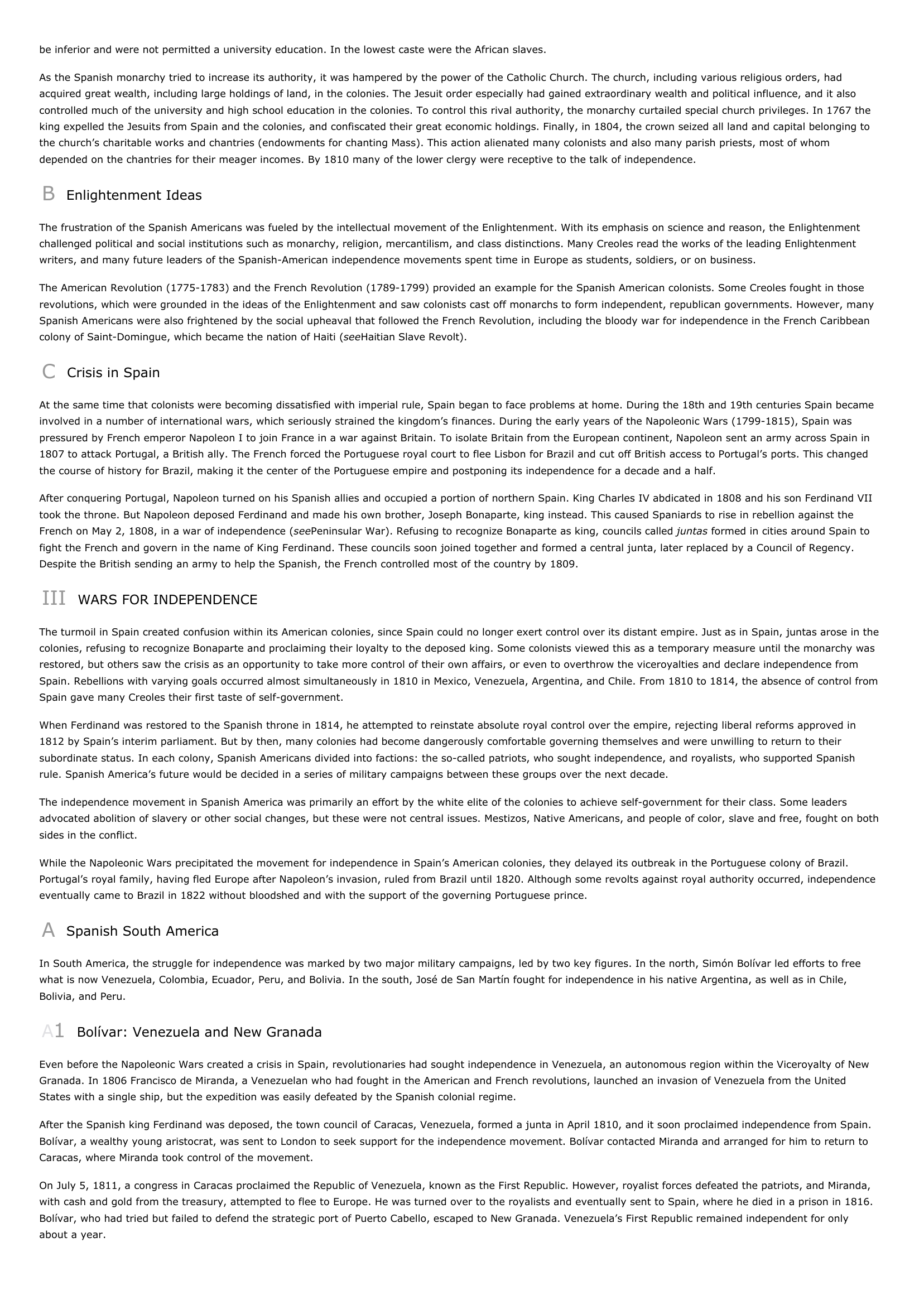