« The Viceroy Arrives at PotosíThe discovery of silver on a hillside near the town of Potosí in 1545 turned this Bolivian city into a key Spanish possessionin the Americas.

The population of Potosí shot up until it reached 150,000 inhabitants by the year 1611.

The work shownhere, The Viceroy Arrives at Potosí, by 17th-century Bolivian painter Melchor Pérez de Holguín, was painted during thezenith of the town’s fortunes.Archivo Fotografico Oronoz From about 1580 to 1650 European styles became dominant in Latin America, especially in the cities, where European power was concentrated.

The native populationwas drastically reduced after the arrival of Europeans as a result of exposure to European diseases (to which Native Americans had no resistance), the loss of their ownmedical systems, and the exploitation of native labor.

By 1557 there were enough immigrant artists in Mexico City to found a guild.

These commissions were primarily for religious paintingsintended for churches.

In Mexico the Indochristian style became much less important in official church art, but it continued to influence folk art forms. After 1580 artists of diverse European origins brought Spanish, Italian, and Flemish styles to Latin America.

The Flemish element was particularly strong in Mexico andthe Italian in Peru.

These diverse European influences shared, among other things, the dramatic style known as Mannerism, which was characterized by exaggeratedpostures, discordant colors, and a shallow depiction of space that concentrated the action directly in front of the viewer.

One particularly important aspect of baroque art in Latin America was tenebrism, a style that employs sharp contrasts of light and dark to add drama to scenes.European tenebrists who wielded a strong influence in Latin America were Italian painter Caravaggio, generally considered the originator of the style, and one of hisSpanish followers, Francisco de Zurbarán, who painted austere, powerful images of saints, often in prayer.

Along with Caravaggio, he had a lasting influence on Latin American art, especially in Mexico, Peru, Colombia, and Ecuador. From about 1680 to 1715, Mexican artists Juan Correa and Cristóbal de Villalpando developed a style that blended the realism and emotional drama of baroquecompositions with elements of indigenous folk art, including a naive drawing style and the use of local people as models.

Creoles—people of European descent who wereborn in the colonies—were becoming increasingly important as art patrons.

They took pride in both their ethnic heritage and the culture of their new homeland, andsought paintings that reflected this pride. A similar mixture of native and baroque European styles developed in Cuzco, where indigenous and mestizo artists had founded their own guild by 1688.

Paintings fromCuzco, which often use gold leaf applied as the background for an entire painting, express an enchanting combination of naiveté and dramatic baroque composition.Images include exotic tropical birds, devotional images of the Virgin Mary, and depictions of archangels as Flemish musketeers.

In both Mexico and South America,. » 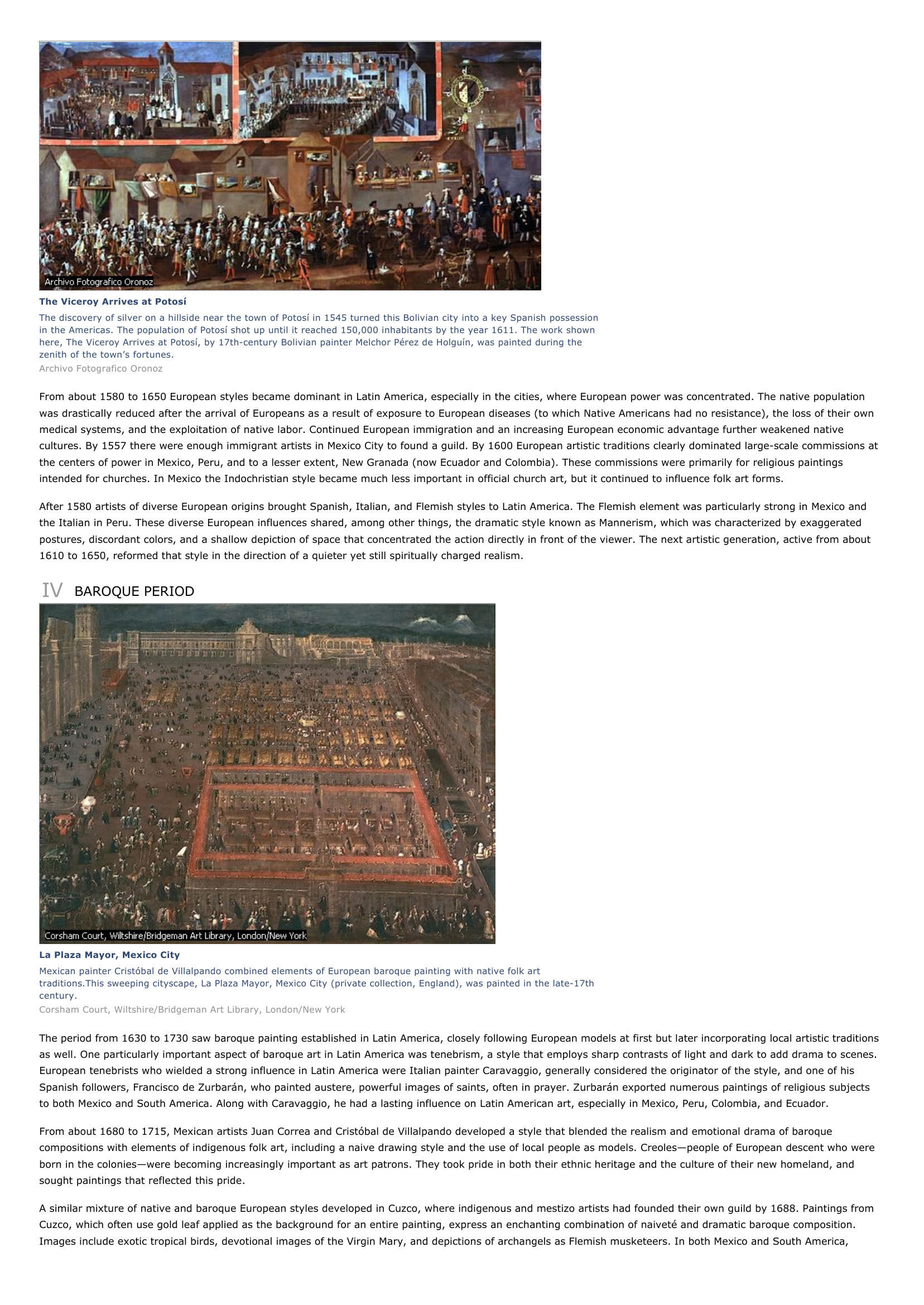