« including the sacred style of church music and the so-called galant (courtly) idiom.

The elegant though often superficial galant style dominated much instrumental music of the 1760s and 1770s.

Mozart’s mastery often demonstrates itself in an ability to expand and deepen the stylistic possibilities of the time.

The manner in which heextended the character and form of the concerto, for instance, owes much to his experience in writing operatic arias. A Musical Expressiveness In the masterful Jeunehomme Concerto of 1777, the slow middle movement in C minor contains passages suggesting vocal recitative (music structured to resemble the tones and rhythms of speech).

The firstand third movements of the concerto brilliantly exploit dramatic contrasts between the piano soloist and the orchestra.

At the beginning of the first movement, thepianist surprisingly answers the orchestra’s opening phrase, although the usual practice called for this section to be given exclusively to the orchestra.

The third andfinal movement of the concerto introduces a lyrical minuet, or dance tune, in the middle of a lively musical form called a rondo.

The rondo, in which musical themesrecur, is played in a rapid tempo, with virtuosic solo passages, called cadenzas, given to the pianist. Many of Mozart’s most impressive works date from the last decade of his life, 1781 to 1791, which he spent primarily in Vienna.

His comic German opera Die Entführung aus dem Serail (The Abduction from the Seraglio , 1782), which takes place in a Turkish palace, shows an exceptional range of musical characterization.

The “stupid, surly, malicious Osmin,” as Mozart described the overseer of the palace’s seraglio (harem), is depicted in the opera with frenzied music that is intended to sound Turkish; the music’s colorful orchestration (combination of instruments) includes piccolo, triangle, cymbals, and drum.

On the other hand, Constanze, the German woman Osmin holds captive, has an elaborate aria that gives noble expression to her heroic defiance of her captor, no matter what tortures she might suffer.

The aria,“Martern aller Arten” (“Tortures of Every Kind”), is introduced by a long passage of 60 measures, featuring solo parts for flute, oboe, violin, and cello that express arange of emotions.

By the time of Idomeneo and Die Entführung, Mozart had found musical equivalents for an entire spectrum of dramatic events and human responses. B Instrumental Innovation Mozart was especially proud of his Quintet for Piano and Winds in E-flat Major (K.

As far as scholars know, this is the first quintet ever composed forpiano and woodwinds (oboe, clarinet, bassoon, and horn).

In Mozart’s piano concertos from this time, the wind parts become independent, departing from the usualpractice of doubling (playing the same notes in different octaves) the string instruments (violins, violas, and cellos).

The Piano Concerto No.

450) from 1784 opens with solo woodwinds, and later concertos show a resourceful use of woodwinds for solos as well as for color.

Particularly innovative in Mozart’s laterwork is his use of the clarinet, which was not a fixed member of the orchestra at that time.

His writing for this instrument culminates in two works written for Austrianclarinet virtuoso Anton Stadler: the Clarinet Quintet in A Major (K.

622, 1791). C Chromaticism and Keys Few composers have written so unforgettably in minor keys using chromaticism , in which all of the tones and semitones (half steps, as from F to F-sharp) of the musical scale are employed.

Chromaticism means composing with tones that are not part of the established key, as Mozart does, for example, at the beginnings of the StringQuartet in C Major ( Dissonance, K.

491, 1786). Mozart associated the key of D Minor with music that conveys vengeance and fear, as in the music heard at Don Giovanni’s confrontation with the stone guest near theend of Don Giovanni.

Here, Mozart combines chromaticism with majestic contrasts in sonority (sound) and an orchestration featuring trombones to evoke a powerful sense of foreboding and terror.

Mozart deepens the dramatic evocation of the demonic by foreshadowing this D-minor music at the beginning of the overture to theopera, and throughout the opera he associates references to Don Giovanni’s slaying of the Commendatore (whose statue is later the stone guest) with ominousreferences to the key.

Similar associations with this key appear in other works, such as in the D-minor revenge aria of the Queen of the Night in The Magic Flute. Another key closely associated with Mozart is G minor, which he employed to convey agitation and emotional turbulence in his Symphony No.

516, 1787), and the moving lament “Ach, ich fühl’s” (“Ah, I feel it”) sung by Pamina in Act II ofThe Magic Flute. D Stylistic Resourcefulness During his Vienna years, Mozart could combine the most popular tuneful charm with the most learned compositional devices, as in the serenade Eine kleine Nachtmusik (A Little Night Music, K.

He absorbed the older styles of German composers George Frideric Handel and Johann Sebastian Bach, even arranging some Bachfugues (works based on interwoven melodies) for string instruments.

Fugues also appear in the last movement of Piano Concerto No.

459, 1784) andin the overture to The Magic Flute, in which Mozart blends music of a vivacious, humorous character—marked by quick, repeated notes—with rigorous fugal structure. Two other examples of Mozart’s stylistic resourcefulness are the three dances in the finale of the first act of Don Giovanni and the remarkable final movement of the Symphony No.

In Don Giovanni, Mozart combines three dances that embody the different social positions of the characters.

The musical confusion creates almost unbearable tension before the peasant girl Zerlina stops the dancing by crying out for help during Don Giovanni’s attempt to seduceher.

In the last movement of the Jupiter Symphony, the climactic last section, or coda, contains a simultaneous presentation of nearly all the motifs (short segments of melody or rhythm) and themes (repeated melodies) of the movement. The most celebrated of Mozart’s sacred compositions is the unfinished Requiem (K.

626), which combines learned fugue techniques with the vocal features of opera.Masonic elements also are present in the Requiem, as in The Magic Flute where they are represented in the music of the wise and benevolent Sarastro.

In the Requiem, Masonry is reflected in the use of basset horns, late-18th-century instruments associated with the order, and in the hymnlike solemnity of the music, sometimesreminiscent of the music for Sarastro.

Before his death Mozart reportedly discussed the completion of the Requiem with his student Franz Xaver Süssmayr, who mayhave received specific directions from the composer.

Süssmayr’s completion remained the version of the Requiem used in most performances until recently.

Debateover its merits and shortcomings continues, and several scholars have offered alternative completions of the Requiem. IV EVALUATION Mozart is one of the most universal of composers and one of the greatest geniuses of Western civilization.

Drawing onvarious national traditions, he brought the classical style to its highest development.

This style, which evolved from about 1750 to 1800 when Vienna was the center ofEuropean music, is characterized by lively contrasts of themes and by symmetry of forms.

In the dramatic genres of opera and concerto, Mozart enjoyed uniquesuccess.

The richness of musical characterization and the psychological insights of his operatic masterpieces find parallels in much of his purely instrumental music. 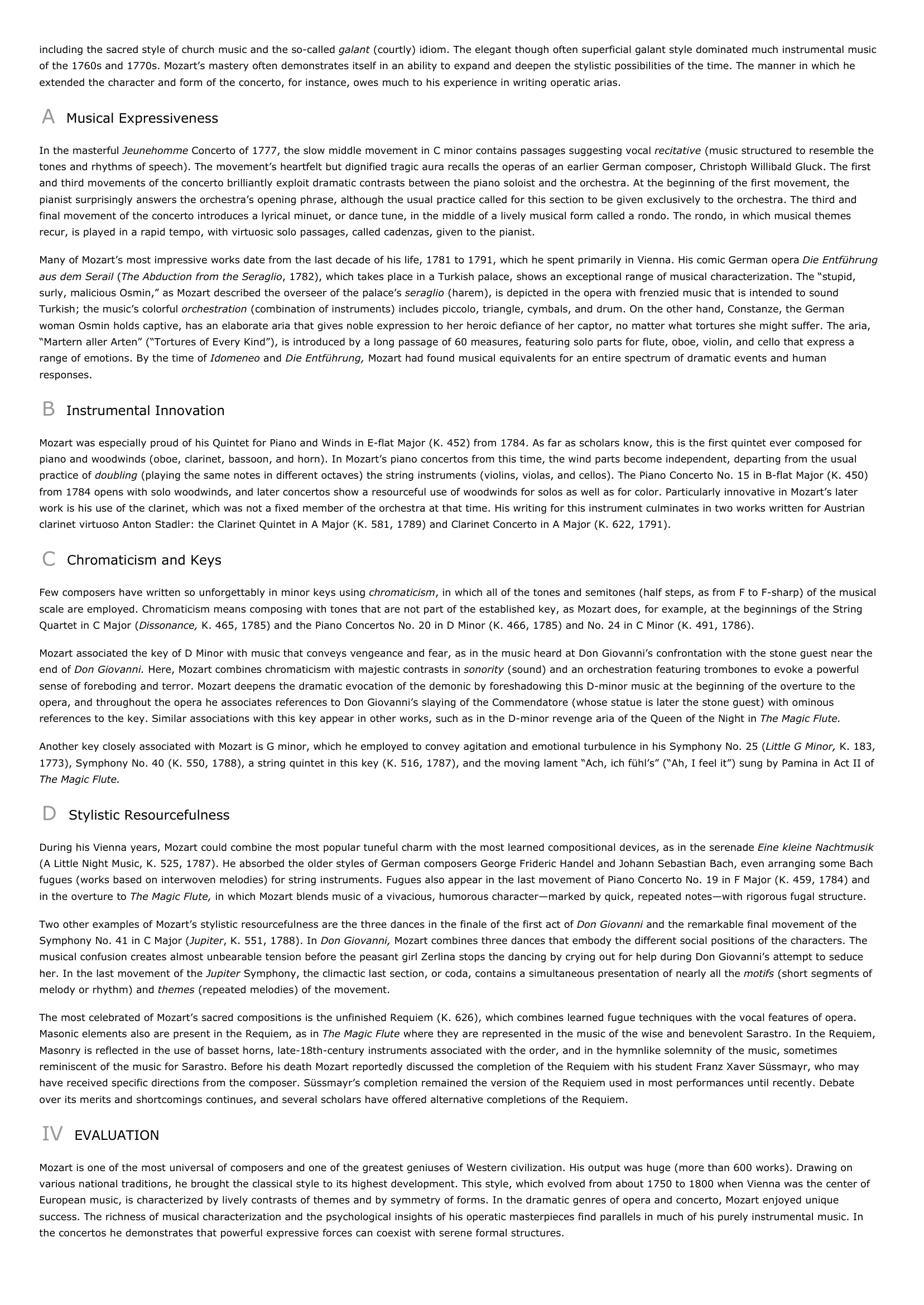