« until after Napoleon’s fall did the common people of Europe, alienated from his governments by war taxes and military conscription, fully appreciate the benefits he hadgiven them. VI NAPOLEON’S DOWNFALL In 1812 Napoleon, whose alliance with Alexander I had disintegrated, launched an invasion of Russia that ended in a disastrous retreat from Moscow.

Thereafter allEurope united against him, and although he fought on, and brilliantly, the odds were impossible.

In April 1814, his marshals refused to continue the struggle.

After theallies had rejected his stepping down in favor of his son, Napoleon abdicated unconditionally and was exiled to the Mediterranean island of Elba.

Marie Louise and his sonwere put in the custody of her father, the emperor of Austria.

Napoleon never saw either of them again.

Napoleon himself, however, soon made a dramatic comeback. In March 1815, Napoleon escaped from Elba, reached France, and marched on Paris, winning over the troops sent to capture him.

In Paris, he promulgated a new andmore democratic constitution, and veterans of his old campaigns flocked to his support.

Napoleon asked peace of the allies, but they outlawed him, and he decided tostrike first.

The result was a campaign into Belgium, which ended in defeat at the Battle of Waterloo on June 18, 1815.

In Paris, crowds begged him to fight on, but thepoliticians withdrew their support.

Napoleon fled to Rochefort, where he surrendered to the captain of the British battleship Bellerophon. He was then exiled to Saint Helena, a remote island in the south Atlantic Ocean, where he remained until his death on May 5, 1821. VII THE NAPOLEONIC LEGEND The cult of Napoleon as the “man of destiny” began during his lifetime.

In fact, he had begun to cultivate it during his first Italian campaign by systematically publicizinghis victories.

As first consul and emperor, he had engaged the best writers and artists of France and Europe to glorify his deeds and had contributed to the cult himselfby the elaborate ceremonies with which he celebrated his rule, picturing himself as the architect of France’s greatest glory.

He maintained that he had preserved theachievements of the Revolution in France and offered their benefits to Europe.

His goal, he said, was to found a European state—a “federation of free peoples.”Whatever the truth of this, he became the arch-hero of the French and a martyr to the world.

In 1840 his remains were returned to Paris at the request of King LouisPhilippe and interred with great pomp and ceremony in the Invalides, where they still lie. VIII EVALUATION Napoleon’s influence is evident in France even today.

Reminders of him dot Paris—the most obvious being the Arc de Triomphe, the centerpiece of the city, which wasbuilt to commemorate his victories.

His spirit pervades the constitution of the Fifth Republic; the country’s basic law is still the Code Napoléon, and the administrativeand judicial systems are essentially Napoleonic.

Napoleon’s radical reforms in all parts of Europe cultivated theground for the revolutions of the 19th century.

Today, the impact of the Code Napoléon is apparent in the law of all European countries. Napoleon was a driven man, never secure, never satisfied.

“Power is my mistress,” he said.

His life was work-centered; even his social activities had a purpose.

He couldbear amusements or vacations only briefly.

His tastes were for coarse food, bad wine, cheap snuff.

He could be charming—hypnotically so—for a purpose.

Nothing and no one, however, were allowed to interfere with his work. Napoleon was sometimes a tyrant and always an authoritarian, but one who believed in ruling by mandate of the people, expressed in plebiscites.

He was also a greatenlightened monarch—a civil executive of enormous capacity who changed French institutions and tried to reform the institutions of Europe and give the Continent acommon law.

Few deny that he was a military genius.

At Saint Helena, he said, “Waterloo will erase the memory of all my victories.” He was wrong; for better or worse,he is best remembered as a general, not for his enlightened government, but the latter must be counted if he is justly to be called Napoleon the Great. See French Revolution; Napoleonic Wars. 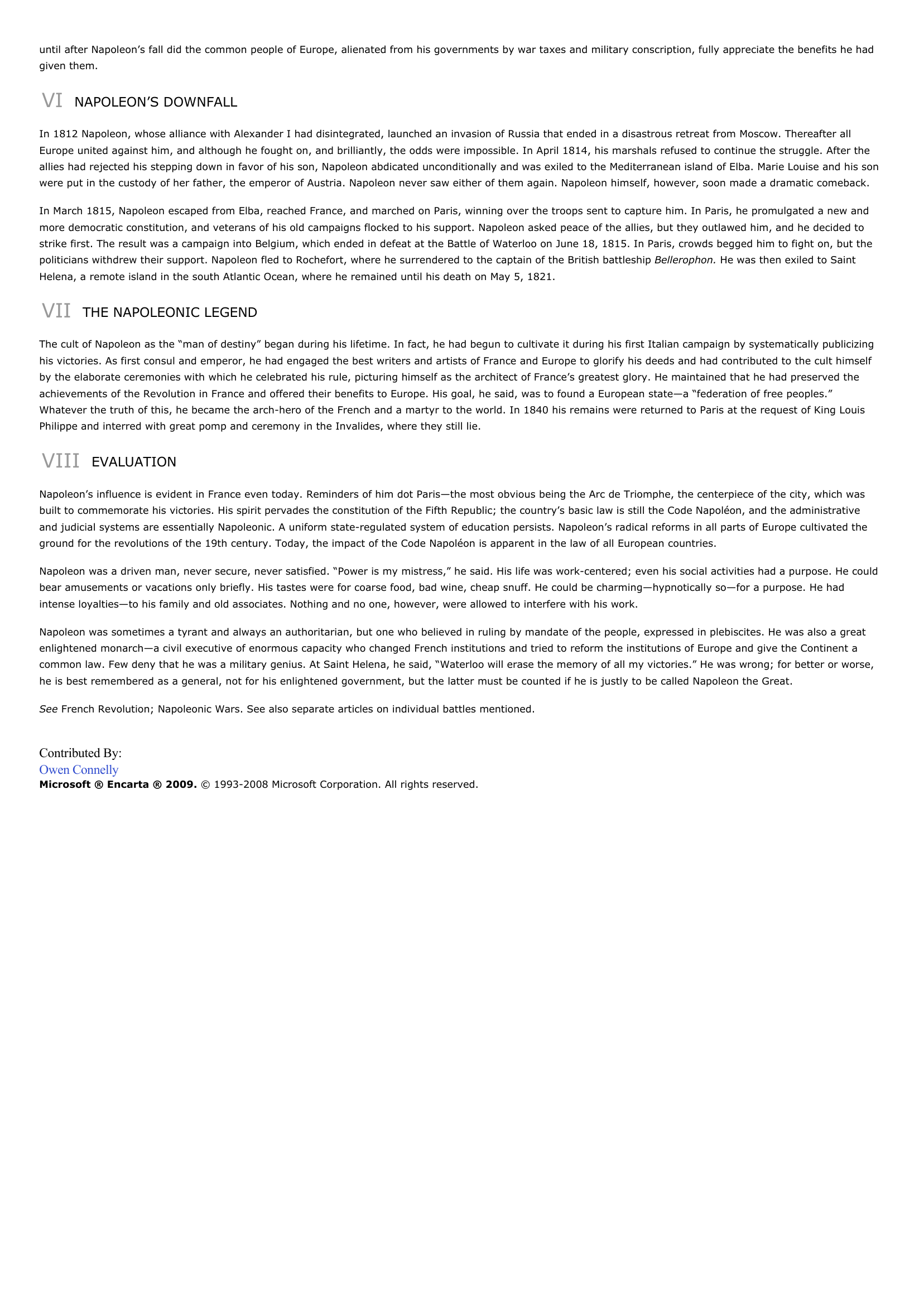