« B State Criminal Procedure A person prosecuted in the courts of a particular state on a charge of violating the criminal laws of that state is subject to state criminal procedure.

State criminalprocedure is found in the constitution, statutes, rules, and judicial decisions of that state.

Furthermore, portions of the U.S.

Some states haveprovisions that vary from federal constitutional requirements.

For example, in a number of states criminal charges need not result from the proceedings of a grand jury.Instead, a judge determines whether or not the accused person should be tried after reviewing the evidence during a preliminary hearing.

States may provide greaterrights for criminal defendants than the U.S.

Constitution guarantees. The Supreme Court of the United States has required states to provide to criminal defendants most of the procedural guarantees in the U.S.

For example,states must recognize the Fifth Amendment right to avoid self-incrimination.

In addition to these specific rights, the states are required by the U.S.

The 14th Amendment, passed after the American Civil War (1861-1865), reads in part, “nor shall any State deprive any person of life, liberty,or property, without due process of law; nor deny to any person within its jurisdiction the equal protection of the laws.” Like the 5th Amendment, which applies tofederal criminal procedure, the 14th Amendment requires the states to maintain certain minimum standards of fundamental fairness in their laws concerning criminalprocedure.

For instance, prosecutors may not systematically exclude members of a particular race or gender from a jury.

State convictions that result from proceedingsthat violate the minimum standards required by the 14th Amendment can be set aside by the federal courts through the process of appeal if the state courtsthemselves do not do so first. IV JURISDICTION For a criminal conviction to be valid, both the sovereign power (the state or federal government) and the specific court that tries the accused must have jurisdiction(authority) over the crime charged.

Jurisdiction refers to a court’s authority to hear and decide a case.

The jurisdiction of state courts is restricted by the geographicalboundaries of the state.

Jurisdiction is also limited by the type or subject matter of a case.

For example, a family court with jurisdiction over child custody andplacement cannot try a murder case. According to the laws of some states, a crime is committed in only one place and only the sovereign that controls that place has the power to try the accused for thewrongdoing.

Therefore, if a woman standing in one state shoots and kills a man who is just over the state line in another state, the murder is committed in the statewhere the lethal bullet hit the victim.

Only the state where the victim was injured has jurisdiction to try the woman.

However, some states have enacted statutesconferring jurisdiction on the state where the crime was partly committed. Because in many instances only the state where the crime was committed may prosecute the accused, laws have been enacted providing a process for acquiringcustody of individuals accused of committing a crime in one state who then flee to another state or country.

Constitution provides for interstateextradition—that is, each state must surrender people who flee to that state upon a request by another state in which the person is accused of committing a crime.Many countries have adopted treaties that specify how suspected criminals who flee from one country to another can be returned to the country from which they fled. V PRETRIAL EVENTS The rules of criminal procedure affect many actions prior to the formal trial of the defendant.

Even before a suspect is arrested, certain procedural rules govern theactivities of the police and the rights of the suspect.

After an arrest is made, a series of events takes place leading up to either release, a guilty plea, or a trial todetermine the accused person’s guilt or innocence.

All of these events are governed by the rules of criminal procedure.

Because each jurisdiction develops its ownprocedures, the names of the various pretrial proceedings and the order in which they occur vary. A Investigation and Arrest The first step in a criminal prosecution is normally the arrest of the suspect.

Arrests can be made with or without a warrant (a document issued by a court prior to anarrest that clearly specifies the nature of the offense for which the suspect is being arrested).

An arrest is the process of taking a person into custody for the purpose ofcharging that person with a crime.

An arrest is typically preceded by a prearrest investigation in which the police seek to determine (1) whether a crime was actuallycommitted; and (2) if it was committed, whether there is sufficient information pointing to the guilt of a particular individual to justify arresting that person. The prearrest investigation may involve, among other techniques, personal observation by a police officer, questioning of witnesses and the suspect, and collecting andexamining physical evidence left at the scene of a crime ( see Crime Detection).

Before questioning a suspect in custody, the police must inform him or her of certain legal rights, including the right to remain silent and the right to have an attorney present during questioning.

These Miranda warnings are named after the 1966 Supreme Court case, Miranda v.

Arizona , in which the Court declared the necessity of such a procedure. A judge may issue an arrest warrant if either a police officer or a private person swears under oath that the accused has committed a crime, or that a crime has beencommitted and there is probable cause for believing the accused committed it.

For certain crimes, a summons may be used in place of an arrest.

A summons is a formal document notifying a person that he or she is required to appear in court to answer a charge.

A police officer may properly make an arrest without a warrant if a felony(serious crime) is committed or attempted in the officer's presence, or if the officer reasonably believes a felony has been committed and that the accused did it.

Apolice officer may also make an arrest for any misdemeanor (minor offense) committed or attempted in the officer's presence.

Even a private citizen may properly makea warrantless arrest in certain limited circumstances, but such citizen's arrests are rare. B Booking Once the suspect has been taken into custody and transported to a police facility, he or she is booked .

Booking is the clerical process by which an administrative record is made of the arrest.

The name and address of the person arrested (sometimes referred to as the arrestee ), the time and place of arrest, the name of the arresting officer, and the arrest charge are entered in the police log.

If booked on a minor offense, the arrestee may be able to obtain release immediately by posting cash (known as station house bail) as security to ensure his orher appearance before a magistrate at a later date.

If arrested on a serious offense, the accused will be placed in a holding facility to await the filing of an initialcharging document (complaint) and a first appearance before a judge or magistrate. C First Judicial Appearance Within a reasonable time after the arrest, the accused must be taken before a magistrate and informed of the charge.

The magistrate will ascertain that the person. » 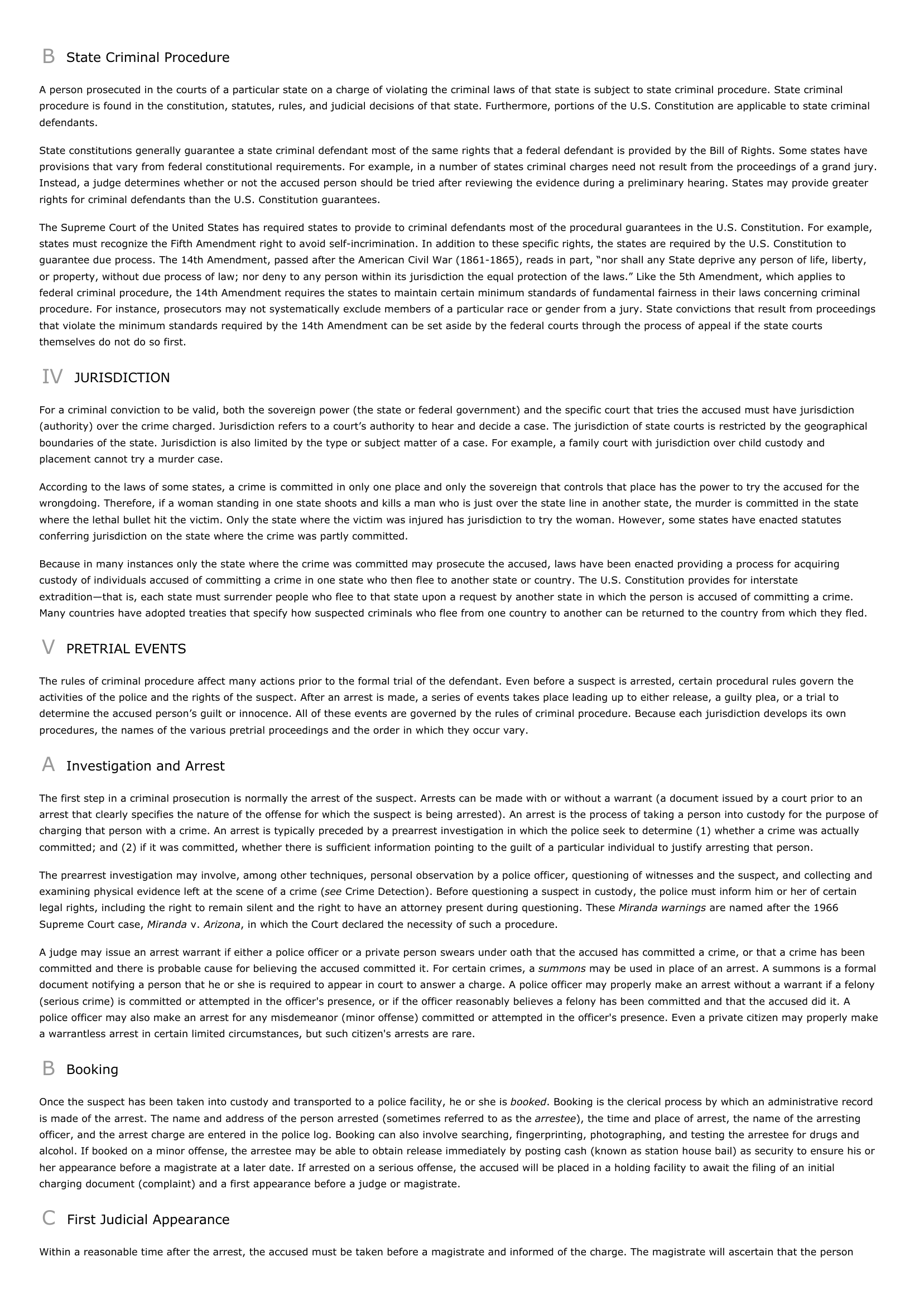